The Monuments Men: A Review

Is a picture worth a thousand lives?

I have a love for history, for art, for historic preservation.  I also have a great love for World War II history (though after suffering through the Organization of Information course at the hands of a hereto unnamed Satanic professor, that love has lessened).  Therefore, The Monuments Men, the fact-based story of art experts racing to save European art treasures from destruction at the hands of the Nazis or theft from the Soviet Army, would be up my street.

While the actual subject of The Monuments Men is probably still fascinating, the film of this group is lifeless, dull, and a sheer misfire.

Lieutenant Frank Stokes (co-writer/director George Clooney) convinces President Franklin Roosevelt to form a special group to help preserve and rescue priceless artwork that the Nazis are either stealing or destroying.  He quickly (very, very quickly) sets up his "Monuments Men".  At the top of his list is Lt. James Granger (Matt Damon), who is curator at the Metropolitan.  We also get an architect, Richard Campbell (Bill Murray), a sculptor, Walter Garfield (John Goodman), a Frenchman, Jean-Claude Clermont (Jean Dujardin), a disgraced ex-drunk British expert, Lord Grantham...I mean, Donald Jeffries (Hugh Bonneville), and some other guy Preston Savitz (Bob Balaban).  They quickly get past basic training and then move on to Normandy, where they split up, mostly into groups save for Granger, who goes to Paris to get a most reluctant faux-collaborator, Claire Simone (Cate Blanchett) to help them track down the art, some of which was stolen from Jewish owners.

There are a couple of hunts for the Ghent Altarpiece (which the Belgians attempted to spirit away but which was taken by the Nazis) and a Madonna in Bruges.  Along the way, they encounter evil Nazis who are dumb enough to hang Rothschild paintings in their homes.  They also find Red Army types who are forming their own Soviet version: the Trophy Brigade, whose job is to STEAL from the Nazis to take to Moscow.

While lives are lost for the sake of art (here's a hint, the two men who died are not American), through some luck, some determined detective work, a nice Jewish American soldier from Jersey named Epstein (Dimitri Leonidas) and a more accommodating Claire (who kept a detailed journal of what are was taken where and from/by whom), the Monuments Men find various treasures in the salt mines around Germany and in German castles.  In the end, Stokes tells now-President Truman that it truly was worth the risk to lives to save the collected history of Europe. 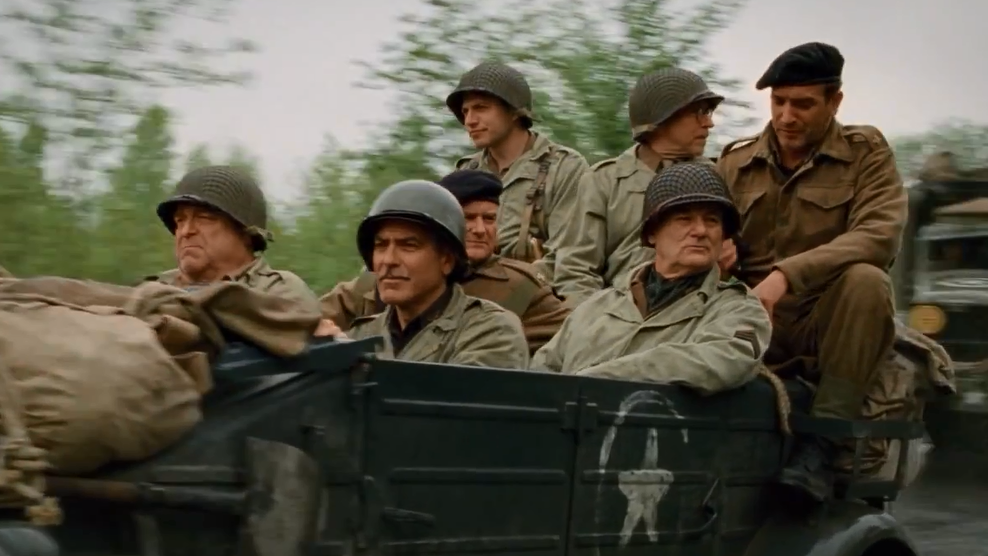 In many ways, The Monuments Men is that kind of Oscar-bait film that is suppose to be both inspirational (about the importance of art in human lives) and exciting (the world at war).  The film was scheduled to be released in December of last year, but was pushed back.  The official story was because of production issues, but my theory is that Clooney knows a turkey when he sees one (even if he made said turkey) and The Monuments Men was not going to receive any Oscar nominations.  He may protest to the contrary, but The Monuments Men was aimed for awards consideration.

The end results show instead a dull, plodding film where nothing moved or was moving.  The entire creation of the Monuments Men themselves is done so quickly we really don't know why THESE particular men were chosen, or who they were, or how they connected.  Apart from the fact that he looks like Beetle Bailey, Bob Balaban's character is the worst of the lot merely because we don't even know what exactly his field of expertise was.  He was seen observing a group of ballet dancers, but did this mean he was a choreographer?  A theater director?  An impresario? A theater critic?

Who the hell was he?  When he is mocked for achieving only the rank of Private versus everyone else who earned lieutenant or captain, why should we care?  Why should he be so prickly over the matter?  How does the fact that Murray's Campbell constantly razzes him about this play into anything?  Did they know each other beforehand?

They certainly didn't know each other all that well when Dujardin (determined to squeeze as many minutes of his 15 from his Oscar-winning turn in The Artist for an English-language career) offers a toast to the Monuments Men.  He offers a toast to a group of men we know little to nothing about, whom we don't see interact all that much if at all before splitting up into their various missions, and who don't appear to know each other all that well.  If I took a guess, I'd say the only thing they had in common was Epstein!


Other elements fall flat, particularly whenever we shift to Granger.  At least three times his ineptness in French is mocked by the actual French, with Granger's insistence that he is fluent in French apparently made out to be the coda to the punchline.  Not that Damon's flat performance helped.

For that matter there really wasn't any acting because everyone tended to behave with the same 'this is a serious film' style where levity was in short supply.  As the only woman, Blanchett I think did what she could, but her Claire Simone came off as more annoying than determined, someone who seemed, like the rest of the film, eerily detached from just about everything (including human emotion).

Sometimes Goodman and Murray could wrench out a bit of lightness, but when we are given points when it was apparently meant to be more humorous (such as when Granger finds himself on a landmine inside a mine), one gets the sense that the actors (and director Clooney, and co-writers Clooney and Grant Heslov) weren't sure how far to make it funny and how far to make it serious, as if they were all stumbling to find a right tone for it.

That landmine moment (which felt much longer than it was) is something to study.  How something like a landmine can come across as both boring and with misfired comedy (no pun intended) to me strikes me as a wasted opportunity.  Calls to have me emotionally moved when Lord Grantham (he'll always be Lord Grantham to me no matter what he plays) or the Frenchman die also go wildly wrong.  Bonneville is the one to suffer the most because he's the only one to be given anything close to a backstory (the alcoholic who is recruited in part as a way to earn redemption).  He apparently cares passionately about the Madonna & Child in Bruges, but why?  Why do any of these people really risk so much?  Unfortunately, we don't know because, like the marble figures they are attempting to save, the men in Monuments Men are too busy being noble and important to be interesting or worth caring about.

Same goes for Claremont.  We're told he has a family, but we don't ever get any sense he thinks of them, so why should we?  We're told Granger has a wife and young son (which explains why he kindly turns down Simone's vaguely romantic overtures), but for all we know this might all be in his mind.


Worse and perhaps most deadly, Clooney and his film fail to make the very case they are trying to make.  We don't know who these men are and they never communicate the passions art stirs in their souls.  None of them ever stop to say, THIS is why saving paintings, saving sculptures, saving books, records, archives.  They don't even have to necessarily use words: their lives could have communicated it somehow.  They could have given us some idea of why they themselves care, or why these particular pieces are worth saving.  Speeches are fine, but Monuments Men shows a group of people who frankly don't look like they've ever set foot in a museum, let alone work in ones.

At the end of the movie, when Stokes is asked if the art we are left to admire was worth the lives of at least two men, he answers yes, but I never got the sense he believed it.   The dispassion both the characters and film convey is sad, expressing more a "going through the motions, we gotta save this stuff because it's our job" than a "we must work to ensure that future generations are not robbed of the collective memory and beauty and work of our ancestors because of man's vile nature".

In short, if The Monuments Men has no passion for its subject, the audience won't have a passion for it either.  It's in its coldness, remoteness, the inability to balance war-era compatriotism between the men and their mutual love for art in general where The Monuments Men constantly stumbles over itself.  It isn't a war film because the battles are few and far between.  It isn't a treasure hunt because they appear to be hunting haphazardly.  One wonders if they had decided to focus on at least one aspect (Granger's Parisian excursion, Jeffries' life up to his death attempting to rescue the Madonna, the Monuments Men pre-war, the search for the Ghent Altarpiece) we might have had something much better than this slow, lumbering, dull exercise.

Alexandre Desplat's score similarly seemed confused: attempting to be stirring, comic, and action-oriented but never fully integrating itself into whatever scene it was in; the cinematography was appropriately sepia at times, but again nothing really extraordinary.  There were a few good moments (such as when the dumb Nazi is discovered with Renoirs displayed so openly) but by ending it with comic music it again stumbles.

If George Clooney had come to me and presented this as his case for the importance of historic preservation in wartime, I might have ordered MORE bombing.  He should know, since The Monuments Men was a bomb and not the lofty Academy-Award winning epic he so desperately wanted to make.