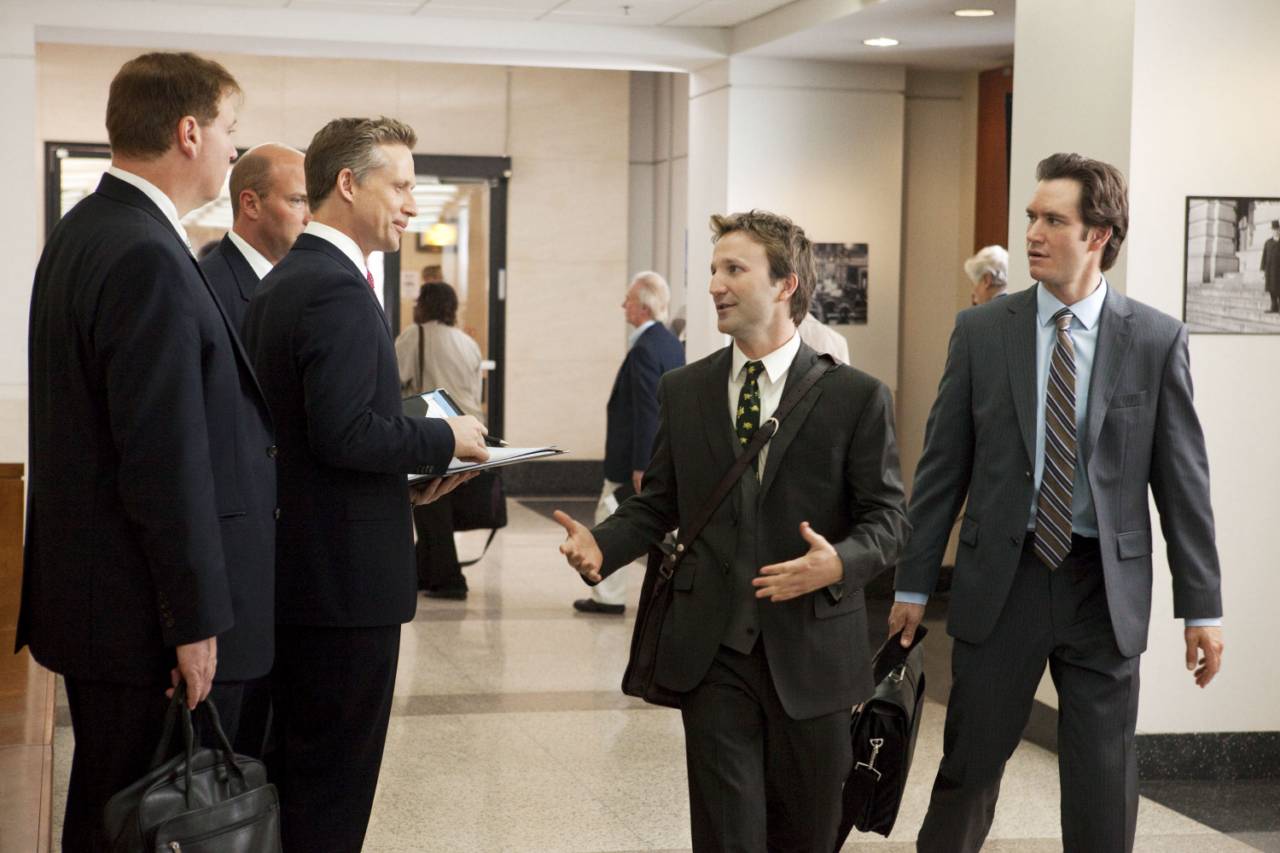 The Frat Is Now In Session...

With Season Four (!) of Franklin & Bash quickly coming upon us, I realized I never got around to reviewing Season One.  The most I did was just an overall review of Season One, and a brief talk about how with both Franklin & Bash and Teen Wolf I was going to expand my television viewing beyond what I normally gravitate to.  The latter has been receiving raves and on a personal note, I met Teen Wolf star Crystal Reed...and she was both very pretty and very nice to the fans, even if she did arrive late to the panel though it wasn't her fault.  She was taken to lunch at a restaurant by the EPCON staff that was far too far from the convention center and with distance and traffic Reed nearly missed the entire presentation.  I got shy and regret not asking her who would win in an archery contest: her Allison Largent or Katniss Everdeen.

Franklin & Bash has never been 'Emmy-worthy' material and I think it would freely cop to being a fluffy show.  I remember liking the first season, even listing it as one of my favorite programs on my OFCS profile.  It wasn't until the second season that I turned violently against it: the whimsy turning into idiocy on a massive scale, the characters regressing, and whole episodes being insulting to my intelligence.  It got to a point where I openly wondered WHY I ever liked this show.  However, let us go back to when I first loved the antics of Jared Franklin and Peter Bash.

Oddly, I remembered nothing about the Pilot*, to where I think the first show I actually watched (or at least remembered) was the second episode, She Came Upstairs to Kill Me.  As such, I could go into Pilot without any baggage of either my memories or the horror Franklin & Bash has become to me.  At least I thought until I rewatched Pilot, and remembered much more than I did.

Jared Franklin (Breckin Meyer) and Peter Bash (Mark-Paul Gosselaar) are two street-smart lawyers (or as street-smart as two wealthy white guys can be).  Despite their legal prowess they take on the wackiest and lowest of low-rent cases because they love their freedom.  One of those cases involves Annie (Melissa Ponzio), accused of being a hooker.  Peter's contention is that she is a dominatrix whose client was in love with her, and since there was love and no cash exchanged, ergo she's not a hooker.  Assistant D.A. Janie Ross (Claire Coffee), whom Peter is still in love with (constantly singing I'm Not in Love to convince himself otherwise), disagrees.

The other involves a car accident where the boys claim that a billboard of a scantily-clad woman was simply too distracting for men and that rather than blame the driver, they should blame the ad.  Representing the bed company whose ad is in dispute is Damien Karp (Reed Diamond) of the prestigious law firm of Stanton Infeld.  He's as stuffy as they come, but the boys have a great strategy: Jared, the more outrageous of the two, has the ad model while on the stand take her blouse off.  Immediately held in contempt, he is taken out, but Peter in taking over questioning asks the judge, the jury, Karp, and even the court reporter to give back her testimony.  None can, because they were all distracted.

Thus, he proves his case.

Watching all this is a mysterious old man.  That man is none other than Stanton Infeld (Malcolm McDowell), a legal legend and head of Stanton Infeld (and for plot reasons, Damien's uncle).  Infeld offers Franklin & Bash a job at Stanton Infeld in order to shake up the firm, and they agree with the agreement that they can still take on the cases they like.  Infeld must also agree to bring their team: former convict/investigator Carmen (Dana Davis) and panphobic lawyer Pindar Singh (Kumail Nanjiani).  Damien is appalled that these two nutters are part of the firm and doesn't think they'll stay long.  Another partner, Hanna Linden (Gabrielle Beauvais), seems attracted to Jared.

Now comes the big case: that of Tommy Donegan (Mike Pniewski), a pilot accused of causing a crash due to his joining the 'mile-high club'.  Despite landing the plane safely, passengers are still suing over the accident.  Donegan, who like the boys likes a good time, insists he was professional on board.  The CEO of the company, Neal Bryant (Joe Knezevich) thinks he'd better cut his losses.  Donegan is staying with the boys in their man-cave: a centerpoint for loose women, boozing, and general carousing.  As Hanna and Jared get intimate, Pindar comes in with big news: he's just overheard Damien and Bryant deciding to throw Donegan under the bus to save the company.  Unfortunately, all they have is the testimony of Pindar, who is so terrified of everything he can't leave the house to tell what he heard.

Eventually, all three cases are resolved: despite some setbacks Annie is proven not a hooker, the bed case was settled prior to the boys joining the firm, and with a lot of pressure on Pindar, he goes and is about to reveal to stockholders what was about to go down when Bryant agrees to clear Donegan's name.

Now, perhaps I am taking a far too harsh view of Franklin & Bash in retrospect given how much I ended up hating just about everyone on the show, but as I look at it now I see that the charm has worn off.  At this point, there is still some whimsy to seeing these two himbo wannabes get the results they want.  I do think that having a woman take her top off while on the stand would not work out the way they thought it would: if I were Karp I would have insisted that the judge instruct the jury to disregard that stunt.

Also, creators Bill Chais and Kevin Falls made things a little too easy by having Pindar come upon the videolink to the Stanton Infeld boardroom just as Karp and Bryant were planning out this dastardly scheme.  The party at the man-cave was probably going on late into the night, so really what were the chances of Karp and Bryant being at the office this late, or of them meeting in the boardroom?  Wouldn't Karp's office be a better location for this nefarious planning?

Well, it would, but if we did that then we wouldn't have a story now, would we?

Still, I'm not about to throw out the baby with the bathwater.  It's clear that Pilot was not meant to be taken all that seriously.  Instead, it does what it set out to do: introduce our wacky leads and put their bon vivant personalities within the confines of the stuffy law firm.

I thought the performances were quite good for the material.  Gosselaar's Bash appears to be the more sensible of the two, balancing out Meyer's deliberately obnoxious and arrogant Franklin.  He is also given a more textured inner life, his conflict over his feelings for Janie showing that underneath the unabashed player that he is (one who thinks nothing of appearing nude before strangers), he does have a soul.  That is more than can be said of Jared, as shallow a character as we've come across.  The only thing making anything close to a character flaw is that he is the scion of a brilliant attorney (mentioned quickly but obviously something that will play out in future shows).

McDowell was asked to do nothing but be eccentric to the point of dementia, and he did that well.  Diamond's Karp, set up as the villain, is a bit sleazy and arrogant but he also appears to be the only really sane one in this group.

I personally didn't care for Nanjiani's comedy, but then again I don't care for his stand-up either, so I take it with a grain of salt.  However, Nanjiani wins the prize for making the first gay joke about Franklin & Bash, suggesting that they were like his two gay dads.  This 'gay humor' would grow as the show progressed to where I genuinely suspect Jared Franklin is a homosexual in denial (his romp with Hanna notwithstanding).

The Pilot in retrospect has its good points and not-good points.  It's interesting to see how now, as much as I detest Franklin & Bash to where I don't think I want to see it anymore (except perhaps as a train wreck), the show (like the leads) didn't take itself seriously.  Yes, one could say that is still the case, but one would have expected Jared and Peter to either mature a bit (Gosselaar and Meyer, both now at 40, are starting to look far too old for the perpetual fratboy schtick) or do what they were suppose to do (loosen up the Infeld Stanton firm).

Still, while not terrible it isn't all that intelligent or memorable: like the boys themselves.

Next Episode: She Came Upstairs to Kill Me

* Yes, I am aware that the name of the episode is not Pilot, but I figure why not pretend it is.
Posted by Rick at 2:00 PM