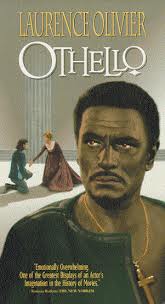 Olivier Finds His Dark Side...

It's a most curious thing to me the issue involving Othello.  Traditionally, the title character, the Moor of Venice, was played by a white actor with black make-up.  As much as can be argued that this is wrong (and while there have been versions with actors like Paul Robeson and more recent interpretations have correctly cast actual black actors like Laurence Fishburne and best of all James Earl Jones in the part), I don't think there were many black actors running around Elizabethan/Jacobean England when the play premiered.  Laurence Olivier, one of if not THE Shakespearean actor of all Shakespearean actors, I think would have looked ridiculous playing a black man without make-up.  It isn't to say that his playing the part with black make-up makes it look any more sensible.  However, as my old English teacher Mrs. Dominguez used to say, we cannot apply today's standards to yesterday's behavior.  In other words, there is no suggestion that Olivier was being in any way racist by deciding to play Othello with heavy dark make-up.

As for the adaptation of Othello itself, it is clear that it is a filmed play, which in itself is not a bad thing given the caliber of the performances.  It can be a bit taking though to sit through it in one sitting (stage plays do have intermissions), but apart from that (and perhaps one major performance), Othello is a fine stage production brought to the screen and a recording of some of the best actors around giving Shakespeare a great go.

Othello (Olivier) has married the fair Desdemona (Maggie Smith), 'fair' having several meanings.  His right-hand man, Iago (Frank Findlay), who secretly hates his master, begins a carefully constructed plot to convince Othello that Desdemona, far from being the young bride passionately in love with the Moor, has in reality been unfaithful.  In Cyprus, where Othello has been sent by Venice to conquer, Iago slowly, sleazily, and steadily pushes the idea that Desdemona has given her love (and bed) to the handsome Cassio (Derek Jacobi).  In time, with some help both witting and none by Roderigo (Robert Lang) who himself dreams of Desdemona, and Iago's wife and Desdemona's maiden Emilia (Joyce Redman), circumstances, situations, and manipulated misunderstandings convince Othello of his wife's unfaithfulness, concluding with the case of Desdemona's handkerchief, which Othello has given his bride and which through deceit has found itself with Cassio.  He then decides that both must die.  As with all Shakespearean tragedies, the truth is unmasked too late, and The Tragedy of Othello, Moor of Venice, comes to its sad end.

Again, one should be prepared for a long evening should one want to watch Othello (at two hours and forty-five minutes, it is a very lengthy adaptation, keeping almost everything that was part of the original National Theater production upon which the film is based).  This is also something that a viewer should keep in mind: Othello is basically the play recorded to film.  Director Stuart Burge rarely if ever broke from an eye-level view in the film.  Perhaps a couple of times was the camera used to more dramatic effects, such as a close up or an overhead shot.  However, on the whole the film is a play.

This shouldn't be interpreted as a diss, for Othello is an extremely well-acted play.  While Olivier may play the title character, it is Finlay's Iago who runs away with the film.  In his scheming, manipulating, ruthless evil, in his shrewdness and ability to use almost every situation that comes his way to his own advantage, Finlay takes great delight in his wicked, wicked ways.  Finlay's theatrical asides and speaking to the audience (or at least speaking to the camera) allow us to almost join him as he maneuvers all those around him towards his nefarious scheme.  In an odd turn, Finlay was nominated for Best Supporting Actor even though he is on screen for one hour and thirty minutes (which was not only a mere three minutes less than Olivier, but is actually longer than some movies!).  Still, Othello is worth watching just for his performance alone.

I also think that both Redman (whose smaller role earned her a Best Supporting Actress nomination) and Smith (also Best Supporting Actress nominee) were good.  I do think that at times, Smith's Desdemona came across less as the loyal wife in love with Othello and actually a bit more like a nitwit.  Still, in her scenes with Olivier, whether in her growing fear for not knowing where the handkerchief is or in her death scene as the terror grows within her (Kill me tomorrow, let me live tonight!) show she could hit the high notes so to speak.  Othello also marked the film debut of Derek Jacobi as Cassio, and to be honest I thought it was almost funny to think HE would inspire passions in women, not because he is openly gay but because he looked somewhat small and slight.  However, it is a strong debut for one of the great actors (albeit an idiot Shakespeare Denier).

As for Olivier, his reputation as a giant of Shakespeare interpreters (rivaled today by Lord Olivier's disciple Sir Kenneth Branagh) is assured, and it is wonderful to see Olivier on film as one would have on stage.  HOWEVER, his performance may suffer precisely because of that.  Looking at it from a vantage point of almost 50 years, Olivier may come across as too theatrical, with excessive hand and arm gestures.  At times, it looks almost exaggerated and even a touch comical.  Olivier's decision to have a deeper voice (which I thought made it look like he was trying to channel Paul Robeson, whose voice was lower than Olivier's natural speaking voice) as well as his body movements might also be brought into question as to whether this was attempting to "sound/act black".   I don't know if it was a good idea for Olivier to alter his voice so much.  Perhaps because unlike Hamlet, Richard III, or Henry V (his other Shakespeare films), Olivier did not direct Othello he was bound to what he had done on the stage.   At times (such as when he is raging) Olivier looks like he's going all out over-the-top.

I will, however, stick up for him in this department.  It was the right decision to have him play the part with black make-up (though I would argue the make-up itself is rather heavy).  He did not play the role in blackface.  I think there has to be a strong distinction between the two.  Blackface (apart from its negative racist connotations) suggests that only his face was painted.  It is clear that Olivier painted his whole body black (we see his legs and chest were all coated).  Hindsight being 20/20 perhaps NOW it would be unacceptable for a white actor to play a black (or Middle Eastern) role, but we have to remember in 1965 this would barely have been a scandal.  Olivier may be the last major white actor to get away with painting himself black to play this role, but in the end, I think it is the performance which should be judged.  I judge it a strong performance, though at times a bit broad for my tastes.

Othello in the end is a strong and powerful stage adaptation brought to the screen.  While the fact that it is basically a filmed play may tax some viewers, and Laurence Olivier's performance may strike modern viewers as either offensive or a bit hammy,  a chance to see a true Actor's Actor perform one of the great roles of Literature (along with other great performances like Finlay and Smith) is one that should be welcomed. 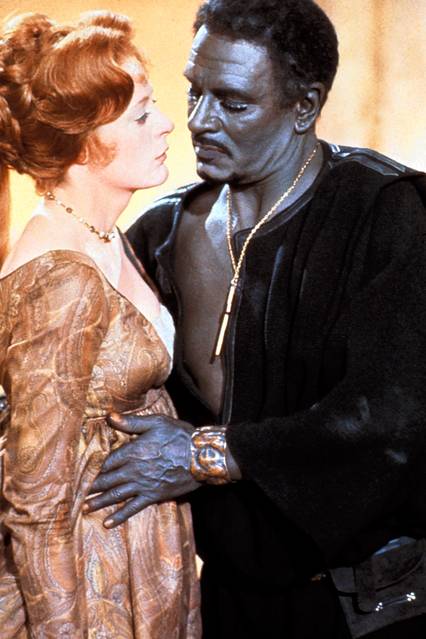