The Americans: Duty And Honor Review

THE AMERICANS: DUTY AND HONOR

The convention as the centerpiece of extramarital affairs is old hat. Sometimes one wonders whether conventions exist merely to allow for adultery.  Duty and Honor gives us in The Americans episode a traditional setting with traditional elements (affairs, entrapment) but gives within its story both a well-acted piece and a look inside the domestic situations that affect so many relationships.  In some ways, The Americans and Duty and Honor in particular are a domestic drama about marriage as well as espionage.

As part of his cover, Philip Jennings (Matthew Rhys) has to attend a Travel Agency convention in New York.  This convention appears to be a grand meeting for more KGB agents (which makes one wonder who exactly was booking packages to Disney World).  Among them is Irina (Marina Squerciati), who works in Montreal and was then-Misha's old flame.  That's right: Philip and "Anne" were once a hot item in Cold Russia, long before he and Elizabeth (Keri Russell) were set up by the KGB.  This convention is to discredit Polish freedom fighter Andrezj Bielawski (Andrew Krukowski), who is working to set up a government-in-exile to counter the Polish puppet state Moscow has in firm control (where art thou, JP II).

Elizabeth has her own crises to deal with, like telling their daughter Paige (Holly Taylor) "No More Leg Warmers" (doesn't have the same ring as 'no more wire hangers', but it WAS the 80s).  She continues the cover of the typical American family and sees that the Beemans marriage is on shaky ground.  Still, Elizabeth thinks her marriage to Philip is getting better until Claudia aka Grannie (Margo Martindale) who still is on frosty terms with Elizabeth, insists that everything is all business, nothing personal.  She won't believe what Grannie says.

Stan Beeman (Noah Emmerich) is pushed into having a one-night stand by his partner, Chris Amador (Maximiliano Hernandez), but instead of picking up a woman at a bar, he consummates his relationship with his mole, Nina (Annet Mahendru).  There's adultery all around, as Anne succeeds in framing Andrezj with rape, forcing him to retire from public life, with some help from a slap-happy Philip and their 'conservative' operative Charles Duluth (Reg Rogers), who masquerades as a reformed Communist now Reagan Revolution supporter.  Anne wants Philip to leave the KGB with her, and while he declines she tells him they have a son, now in the Red Army.  Philip doesn't quite believe her, but Elizabeth sure believes him when he tells her nothing happened between him and Anne. 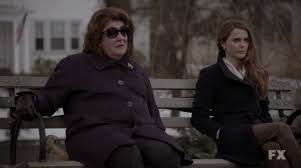 Duty and Honor has as its best moments the interplay between Russell and Martindale, two underrated and underused actresses.   It's clear the characters still loath each other for what they did to each other, but underneath it all they also recognize that it wasn't personal, strictly business.  They were simply great together, building the tension with the news that Elizabeth won't recognize.

The cleverness of Duty and Honor in how Philip and Anne framed the poor Polish guy is also a wild twist that works, but we also have to pause to reflect how well Rhys does as the conflicted Philip.  DOES he have a child?  CAN he pull off lying towards Elizabeth?

Furthermore, the theme of loyalty and faithfulness is at the heart of Duty and Honor.  There is loyalty to your state (the United States and Soviet Union), which the characters are struggling with.  There is loyalty to your spouse (as both Philip and Stan have violated their vows legal and spiritual), and Andrezj similarly has violated his own vows of celibacy, though not technically because he did turn down Anne's offer, but by flirting with danger by having such a close connection to a beautiful woman in a beautiful setting.  He is too close to the joys of capitalism to see the moral corruption within it that makes even the strongest of men weak.

If anything I would say that Duty and Honor is a bit long, taking a while to build up, but it is a well-crafted and well-acted story, especially in regards to the Jennings' domestic side.  The Americans is not just a show about spies (especially those working for our enemy), but about the state of marriages, the importance of truth in one, even in one started as a lie.

Next Episode: Mutually Assured Destruction
Posted by Rick at 8:23 PM