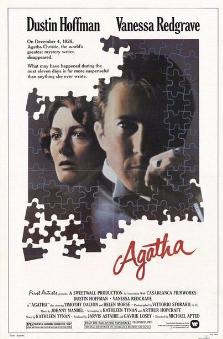 For all the mysteries Dame Agatha Christie wrote about, there was one she never touched on: her own. The truth about Christie's eleven-day disappearance has never been solved, and the only witness took her secret to the grave. Regardless of how close or far the film was to the truth, Agatha, released three years after her death, would certainly have not pleased the very private Lady Mallowan.

Agatha is fanciful and steeped in the feel of a Christie mystery. It may not be historically accurate and in its own opening clear: "What follows is an imaginary solution to an authentic mystery".

Agatha Christie (Vanessa Redgrave) is a shy woman who has found reluctant success with her mystery novels, especially her most recent book, The Murder of Roger Ackroyd. Visiting American journalist Wally Stanton (Dustin Hoffman) is intrigued by Christie, particularly the dichotomy of her timidity to her writing ability, but Mrs. Christie is not about to give interviews.

Especially now when she hears what she has dreaded from her husband, Colonel Archie Christie (Timothy Dalton): he wants a divorce to marry his secretary and mistress, Nancy Neele (Celia Gregory). Agatha is devastated and shocked, aware of Miss Neele's existence but somehow hoping she and Archie won't split up. Right after Archie leaves for the country to be with Miss Neele, Agatha packs a bag, leaves two letters for Archie and her secretary/friend Miss Fisher (Carolyn Pickles), and drives off.

Agatha Christie has vanished without a trace. 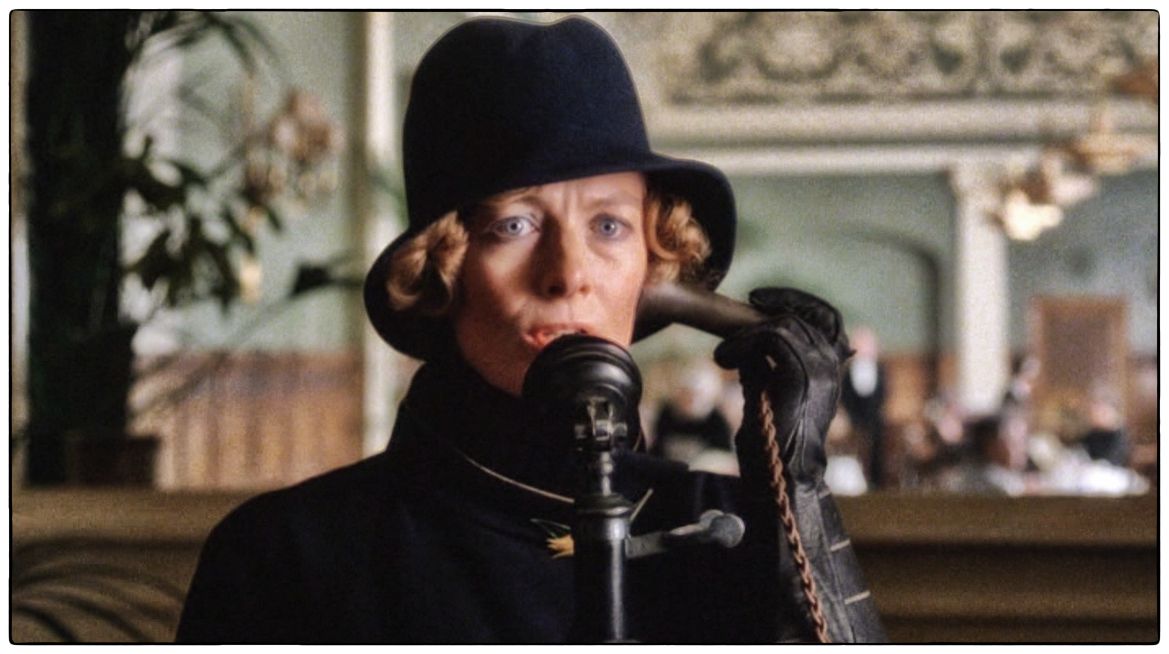 The disappearance of this celebrated mystery writer becomes front-page news, causing all sorts of wild speculation. Was she murdered? Has she gone bonkers? Where could she have gone?

In a haze, Agatha Christie goes to a Harrogate resort and checks in as 'Teresa Neele'. During her stay she makes friends with Evelyn Crawley (Helen Morse), who takes her to spa treatments. Stanton comes upon Christie and unlike others immediately recognizes her. Using a fake name himself of Curtis Schatz, Jr., he too befriends her and attempts to romance her too.

However, 'Teresa Neele' may or may not be in her right mind. She may also be playing a much more sinister and dangerous game against Nancy Neele, one that only Stanton can stop. In the end though, Agatha Christie is finally found, with Wally Stanton putting away his story of how he found her and Agatha and Archie Christie divorcing for him to marry Miss Neele.

In its favor Agatha has a certain style that echoes a Christie mystery: the steam rising from trains, the literally shocking moment that has a surprise, a little bit of romance and a somewhat despicable main suspect. I can't fault Agatha for having a certain style and for being entertaining, even if it is a thorough work of fiction.

No mention is made of the fact that Mrs. Christie was still reeling from her mother's death at the time her husband dumped her for another woman. Agatha Christie, already overwhelmed by this tragedy and dealing with her mother's estate, had to endure a more devastating blow. That is enough to drive an already depressed person into a near-total mental break. 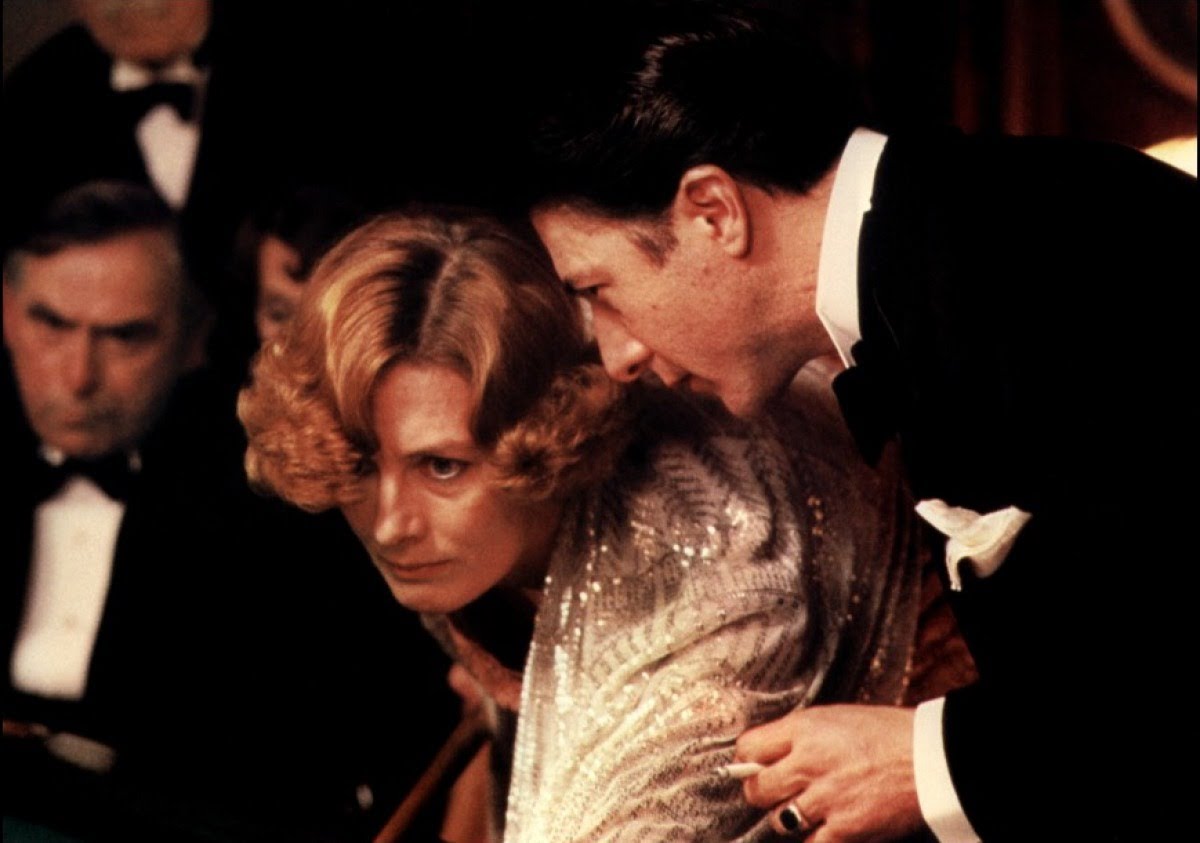 Instead, Agatha creates a lot of things to 'spice up' its story, an odd decision given that the disappearance is already enough to make for an interesting film. One aspect in that is to suggest Christie was apparently simultaneously bonkers and coldly calculating when it came to the other Miss Neele. We keep wondering whether Christie was genuinely sane or not.

Perhaps the most outlandish suggestion Agatha has is this supposed romance between Christie and Stanton/Schatz. To the film's credit there was no lurid love scene and only the tamest of kisses, but somehow the idea that these two had any romantic feelings seems absurd.

As a side note, Agatha almost emphasizes the half-foot difference between Hoffman and Redgrave to inadvertently comic results. The film has Christie tower over Stanton, making their dance highly curious to say the least.

The love theme for the film, Close Enough for Love, is a good song divorced from the film but does not seem to actually fit the movie. It fits the mood of Agatha: a bit mysterious and haunting, but seems out-of-place for two people who never showed they were attracted to each other, let alone in love.

Vanessa Redgrave gave a fine performance as Agatha Christie, a woman driven to wits end, struggling with so much in her haze. She's all nervousness and confusion mixed with some hesitancy and even a touch of frivolity. Hoffman seems a bit one-note as the arrogant Stanton and not once did I believe these two could be remotely in love. It's a pity that Dalton was reduced to a bit of a pantomime villain in his Archie, all barking and stomping about. He's a much finer actor than that.

I think one of Agatha's flaws is how things and characters seem to come and go. Evelyn Crawley is introduced and pretty much forgotten once she gets Christie to the spa. Same for Foster (Paul Brooke), Stanton's field man and fellow journalist covering the Christie search. Once they stop searching his character is never seen again.

Agatha has potential and her story should be revisited. I would recommend cutting out any suggestion of romance and focus instead on her activities in this sojourn of the mind. Near the end of Agatha, Stanton tells Christie that she was 'very silly but very clever'. That seems a good way to sum up Agatha itself.