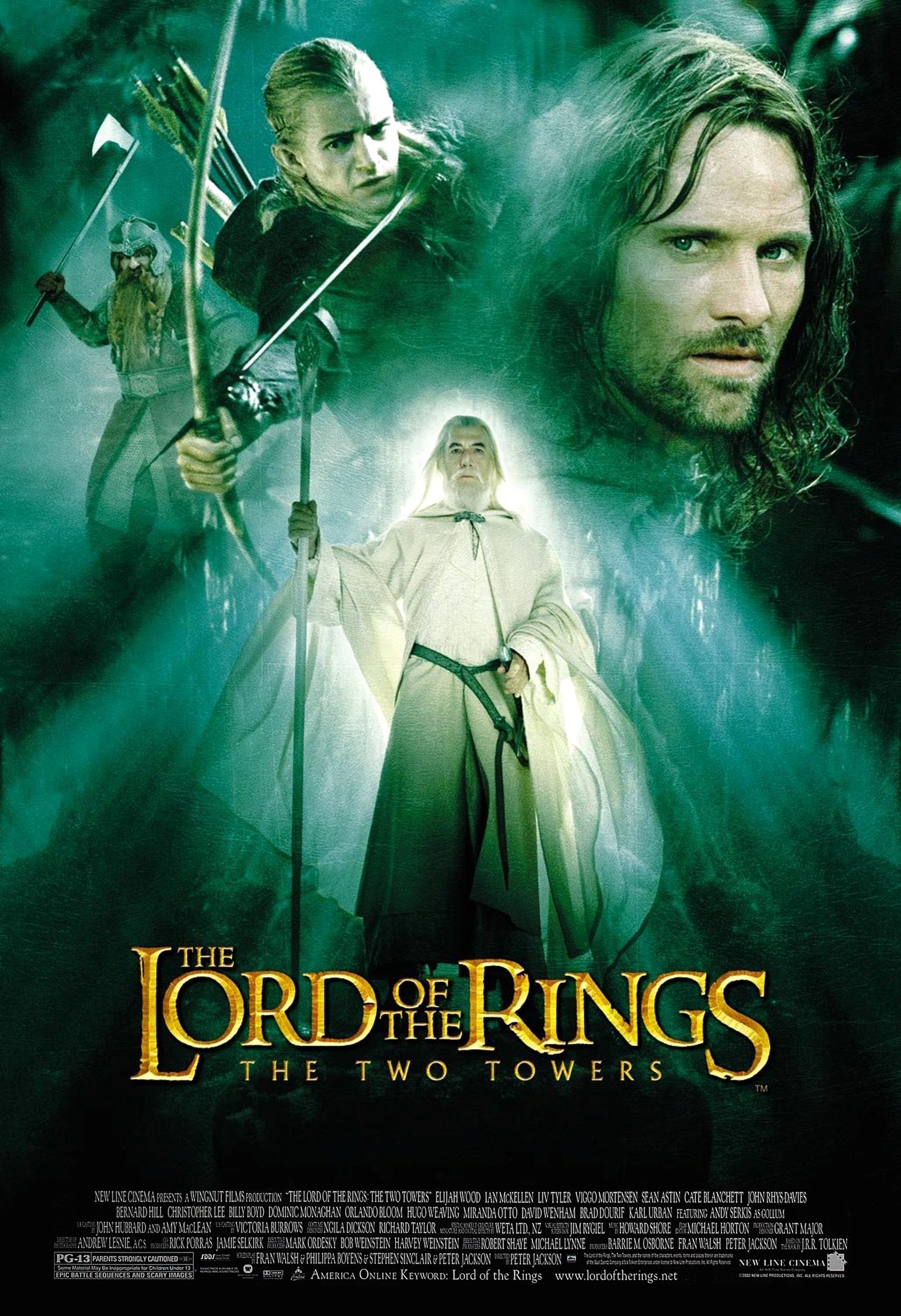 THE LORD OF THE RINGS: THE TWO TOWERS

The Two Towers occupies a curious space in the Lord of the Rings trilogy as the midsection of this massive epic series. Neither beginning or end, The Two Towers has to serve as a bridge between The Fellowship of the Ring and The Return of the King. The questions become whether it stands on its own and whether it holds as said bridge while also working as a film independent of them. On the whole, The Two Towers holds up well, though it does give in at times to both some ill-placed comedy and a loss of focus.

Essentially picking up from The Fellowship of the Ring's ending, The Two Towers has two stories. The main story is of hobbits Frodo Baggins (Elijah Wood) and Samwise Gamgee (Sean Astin) continuing their journey to Mt. Doom in the forbidding world of Mordor to destroy The One Ring. That destruction would ensure the Dark Lord Sauron would be defeated and not destroy all Middle-Earth.

Frodo and Sam are lost, but an unlikely ally comes in the form of Gollum (Andy Serkis), the One Ring's former possessor who is himself possessed by his 'Precious'. He knows the way into Mordor, but Sam does not trust him. Gollum's motivations are as conflicted as the creature himself, for he struggles between seeing 'Master' Frodo as a friend and as his enemy keeping him from his 'Precious'. On their journey, they are captured by Faramir (David Wenham), who takes them to Gondor to gain his father's approval. Faramir happens to be brother to Boromir, killed in The Fellowship of the Ring, but unlike Boromir, Faramir has the strength of character to eventually let Frodo, Sam and Gollum continue on to Mordor, where Gollum may be more foe than friend. 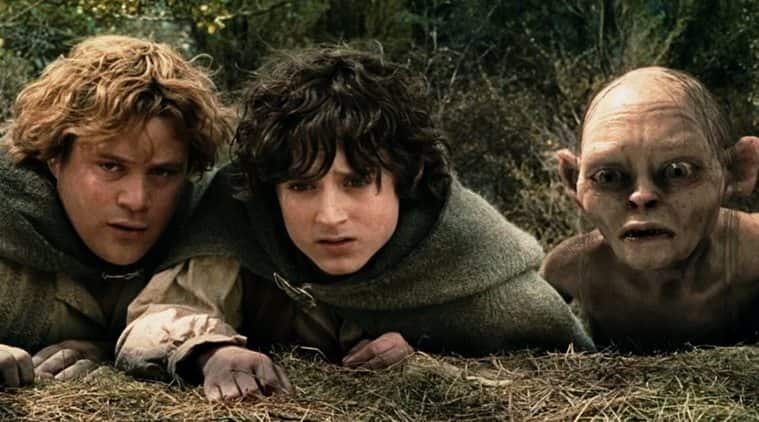 The other story involves the continuing search for two other hobbits: Merry (Dominic Monaghan) and Pippin (Billy Boyd). Aragorn (Viggo Mortensen), the dwarf Gimli (John Rhys-Davies) and elf Legolas (Orlando Bloom) search for them, encountering Orcs and The Rohirrim, fabled Riders of Rohan sent into exile by their king. In their search, they encounter the wizard Gandalf (Ian McKellen), now restored to life as Gandalf the White. The search ended with Merry and Pippin accounted for, they all now press on first to save Theoden (King of Rohan) from the power of Saruman (Christopher Lee), then to fight off Saruman's army at the stronghold of Helm's Deep.

Merry and Pippin, having encountered Gandalf previously, find themselves with Treebeard (voiced by John Rhys-Davies), a wise Ent (a sentient tree), who with his brother Ents does not appear interested in joining this war until he sees what Saruman has done to his fellow trees. Enraged, he lays siege to Isengard (one of the two towers).

Unbeknownst to both groups of hobbits, the Men at Helm's Deep, now joined by Elves in a last-ditch alliance, fight on. The only Elf that Aragorn thinks of is Arwen (Liv Tyler), the love of his mortal life who reluctantly agrees to join her fellow elves in exile at the urging of her father Elrond (Hugo Weaving). This causes a bit of a complication for Theoden's niece Eowyn (Miranda Otto), who has developed feelings for Aragorn. However, this Shieldmaiden of Rohan is conflicted both by her emotions and her efforts to save her people.

That's a lot of story for one film, yet the curious thing is that for all the Sturm und Drang in The Two Towers, story-wise we really don't move far. Frodo and Sam are closer to Mordor but not yet within it. The other members now move on to more pressing matters but are essentially in a prelude to the final confrontation with their enemy. Moreover, The Two Towers has a major issue: simultaneous stories.

It's interesting that Frodo and Sam disappear in a 35-minute gap, that gap filled by the Battle at Helm's Deep. That there is a gap of that length for ostensibly the main character isn't the problem. It's that when he does return one is almost surprised to remember he was there to start with. I found that a lot of The Two Towers has this jumping about that mostly works well but that also has us forget characters and situations until they come back.

Probably the worst was the transition between when Sam and Frodo avoid capture at Mordor's Black Gate and Merry and Pippin travelling with Treebeard. That jump jolted me, but at times The Two Towers seemed a bit unwieldy in trying to balance so much. For example, all of Arwen's scenes, though beautiful and tragic, did not seem to really fit well within the story. It wasn't wildly out-of-place but seemed a bit of a tangent.

Add to that that this is the first time I thought things did not look authentic. The dream/love scene between Aragorn and Arwen looked like a stage. A couple of the visual effects looked inauthentic. Then there was seeing Legolas essentially skateboard down a flight of stairs during the Battle. I figure viewers chuckled at that at the time but now, nearly twenty years on, it looked a bit too humorous.

I could have done without this little bit of levity as well as Gimli being the 'comic relief'. Again, it's not that comic relief couldn't work or even that Gimli could not be a funny character. It's just that too often Gimli's height was used as a source of comedy and it felt a bit forced for me.

I also think The Two Towers was far too fond of 'cliffhanger' moments when perhaps cutting them or changing them about could have worked better. At least twice did Legolas think a character was dead when he wasn't, and you can only suggest something so many times before people start questioning whether said character really is dead.

As a side note, I wondered if I was the only one who thought The Black Gates of Mordor looked like The Wicked Witch's Castle from The Wizard of Oz, down to its marching army all but singing "oh-WEE-oh, E-O-UM!"

To be fair The Two Towers has more positives than negatives. It introduced the entire Norse-like world of Rohan well, from its politics to its characters. Composer Howard Shore introduced a new theme for Rohan and what is exceptional about it is that while it's the same melody it can be both triumphant and tragic. When fully orchestrated the Rohan music can be stirring, but when left to a lowly violin it is deeply sad.

It also was a fantastic showcase for Gollum, this poor, sad creature so brilliantly performed. Serkis makes Gollum a creature of deep tragedy and sympathy, a fully realized and complex character. In turns frightened and frightening, Serkis' work is a credit to both his skills and Peter Jackson's directing.

It's a much better and stronger performance than Wenham's Faramir, who was almost blank to boring. Otto was strong as Eowyn, and Bernard Hill's Theoden too was strong in a wider performance: from the weak and defeated old man to a more vigorous (albeit slightly pompous) warrior king. I won't fault Rhys-Davies for making Gimli into a bit of a joke but I do wonder why he voiced Treebeard as well.

The Lord of the Rings: The Two Towers is a very good film that sadly suffers from a bit too much weight and from being that bridge. It is not that it does not work but I would say that some things might have been better left off or reworked.