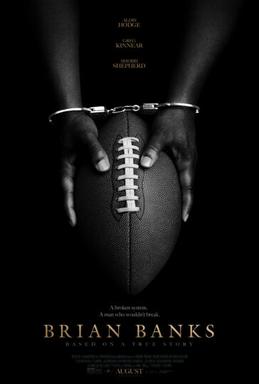 I don't follow football, so I am unfamiliar with the Brian Banks story. Brian Banks tells his story of wrongful incarceration and efforts to clear his name while attempting an NFL comeback at an age when most players contemplate retirement. Brian Banks, while in many ways a standard 'inspirational' biopic with so many of its trappings, at least knows this and does not fail in its aim to be audience-pleasing. It also takes time to be instructive on the many important issues Brian Banks tackles.

Told in slightly non-linear fashion, Brian Banks chronicles our title character (Aldis Hodge), a decent young man whose dreams of gridiron glory were deferred due to a false accusation of rape when he was in high school. He was advised to take a plea rather than go to trial with the idea he'd get some probation but ended up sentenced to six years in prison, four years on probation and a lifetime as a registered sex offender.

This endlessly hampers his ability to get a job, but he has the loving support of his mother Leomia (Sherri Shepherd). Brian has already been rejected by the California Innocence Project when he was in prison, but now time is running out. His probation is coming to an end, and Brian is determined to clear his name before he essentially has a lifetime sentence: physically free but hampered by being a sex offender. Brian's stubbornness on the issue along with his surprisingly adept handling of a writ of habeas corpus impresses Justin Brooks (Greg Kinnear), head of the CIP who somewhat reluctantly agrees to help.

Armed with nothing but truth, along with some revelations by his original accuser Kennisha Rice (Xosha Roquemore) and his new love interest Karina (Melanie Liburd), Brian and Justin fight to clear his name, culminating with justice finally being served. Brian Banks is a combination of a feel-good  and topical film. The audience I saw it with, small as it was, reacted strongly to it: I heard cheers and applause at its climatic ending. As such, I think director Tom Shaydac and screenwriter Doug Atchison accomplished what they set out to do: tell Banks' story in a way that general audiences would embrace.

It is not hard to embrace Brian Banks when almost the whole cast works so well. Hodge is an absolute winner as Brian Banks. He makes Banks into a good man caught in an unfair world. From when he quietly mourns his inability to find employment to his frustration when his parole officer (Dorian Missick) keeps making his life difficult by being so by-the-book, Hodge wins us over.

He is equally complimented by Shepherd as his mother, forever loving and supportive. It may be a one-note character but Shepherd is so endearing as this strong yet vulnerable woman that when she talks about the pain of seeing your son in prison for something he didn't do, it moves you deeply. Primarily known for comic roles, Shepherd is an untapped talent as a dramatic actress and someone who should work more.

Also earning high praise is Liburd as Karina, the personal trainer and aspiring grad student who falls for Brian. Karina is not a one-note supportive type but a strong individual with her own haunted past. Brian Banks was smart in allowing for a complicated subject such as sexual assault & accusations of it to each have a moment.

I would argue that Kinnear was probably the weakest as this crusading attorney. To his credit it was not a showy performance as the temptation to play righteous fury is there. There was a quiet manner to Kinnear's performance, but I don't think he was particularly strong. It was serviceable, and I can't fault him for that.

In many respects Brian Banks is a better set of ideas for a film than a film itself. It touches on important topics: sexual assault and false allegations of such, the higher incarceration rates for African-American men, the expediency of plea deals versus the true search for truth and justice, the stigma against formerly incarcerated men forcing them to a secondary sentence. Brian Banks touches on them but doesn't stick to one. I would argue its impossible to stay with one as the story spreads over all of them.

It also has elements that seem slightly far-fetched and moments that veer close to parody. Morgan Freeman has a cameo as Mr. Johnson, a teacher at the prison Banks is in who serves as a de facto mentor to Banks. Literally and metaphorically seeing the light while Brian is in solitary is probably a touch much. However, I didn't think badly of these elements as I thought the film was being open about such elements.

Brian Banks, film and story, is one that I think should be better-known. Dealing with important subjects and with strong and sympathetic performances, Brian Banks simultaneously entertains and informs. It tells an important story with wide implications on the justice system, and while perhaps a touch maudlin it tells its story effectively to appeal to all audiences.