Amazing Grace had a tortured journey to its ultimate release. Made as a television special in 1972 to record Aretha Franklin's live gospel album, technical issues scudded the first attempt, then legal issues tied things up until after Franklin's death in 2018. Now finally released with the synchronization and legal issues resolved, Amazing Grace lives up to its title, a marvelous recording of an artist at the heights of her powers rendering R-E-S-P-E-C-T to The Almighty.

Directed by Sydney Pollack, Amazing Grace was recorded over the two days that the album Amazing Grace was itself recorded live at the New Temple Missionary Baptist Church. Accompanying 'the Lady Soul' was Reverend James Cleveland, a gospel legend in his own right, and the Southern California Community Choir led by Alexander Hamilton.

Not "that" Alexander Hamilton.

On the second night, unexpected guests attend in the forms of The Rolling Stones' Charlie Watts and Mick Jagger, as do Aretha Franklin's father, the Reverend C.L. Franklin and gospel great Miss Clara Ward. The film primarily involves the actual recording with a live audience, which is reminded by Rev. Cleveland that this is also a religious service. There is only one brief clip of rehearsal footage before transitioning to How I Got Over, one of the many numbers Aretha sings. 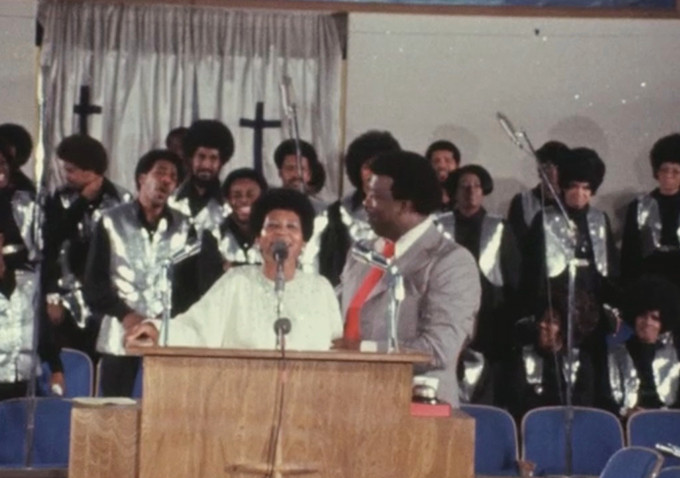 Amazing Grace more than lives up to its title, as The Queen of Soul pays homage to the One True King. One cannot complain that the film is essentially a filmed concert, for who would not want to be in such a presence? For those who are curious, it takes ten minutes before Sister Aretha starts singing after an introduction by Rev. Cleveland and the SCCC marching out to On Our Way.

Her first number is surprising, a cover of Marvin Gaye's Wholly Holy, an interesting mix of the secular and the sacred and a reminder of how what is now R&B and soul music has strong roots in gospel music. Amazing Grace also shows this when it does a medley of Carole King's You Got a Friend with Precious Lord, Take My Hand, a magnificent blending that erases the border between spiritual and worldly.

One is thoroughly enraptured at Aretha Franklin's power and conviction when singing. She's intense and committed both spiritually and artistically, an elegant and devoted performer who serves both her audiences: her fellow worshipers and the object of said worship.

We see in Amazing Grace not just the power of Franklin's extraordinary gifts but also the power of the music. I imagine that even the strongest atheist or agnostic will feel something stirring within hearing the deep passion and belief the audience and participants. When Rev. Cleveland softly calls out, "Can I get a witness here tonight?" before the title song, I wouldn't blame anyone responding "Amen, Brother James!"

Cinematically, there's nothing especially extraordinary in Amazing Grace. Apart from a quick scene of rehearsal the film is content to show just the two-night event, but what an event it was. You even see some of the lightness and joy as The Spirit moves people at the New Temple. Near the end we see a piece of crunched-up paper thrown directly at the camera with the miscreant laughing.

I think it was the Reverend James Cleveland, a sign that to worship is to have joy and even some fun.

Amazing Grace is a joyful, moving, almost spiritual experience, a chance to join in metaphorical worship and see these Precious Memories once more.