Well, no one is perfect.  In all our lives, we've met people whom we regret getting involved with, sometimes personally, sometimes romantically.  These personages we wish we'd never met and hope to outlive so as to wear bright colors at their funerals, maybe do a jig upon their graves.

In regards to the former, the names Ken, Brad and Robert come to my mind (though another is fast entering that list, an Occupier who thinks himself a genius and like all good Occupiers, is so tolerant he won't tolerate any dissent or even jokes about his proletariat movement).

I'm sure the feeling is mutual.

In the case of the latter, well, that's a secret to protect their identity.  There is nothing more tedious than hearing a guy rant about his exes, especially on a blog.

James Bond 007 is no exception to bad relationships.  He's had his share of bad Bond Girls, some dumb, some useless, some pretty but thin in terms of talent, all lowly regarded.  Beauty is no defense against an absolute lack acting talent (just ask Channing Tatum).

With that, I give my Ten Worst Primary Bond Girls.

Oh, I don't think Tatiana "Tanya" Romanova is really all that bad.  She just happened to end up at the Top of the Bottom List.  She sacrifices herself for Stalin and Country, and this selection might be the only one that I could be talked out of.

Again, I can't say she is terrible...it's just that both Solitarie and Octopussy scored higher, so poor Tanya was pushed down by default.  In my defense, I don't think she overpowered the screen either.

Here, I have no doubt: Halle Berry was hideous in Die Another Day.  Certainly not hideous to look at, but hideous in terms of what is generally called 'acting'.

Berry is a curiousity in the realm of Bond Girls: both an Oscar-winner and a generally bad actress.  What can one say about an actress who is remembered more for Catwoman than she is for Monster's Ball, more for getting paid half a million dollars to bare her breasts in Swordfish than being the first African-American woman to win a Best Lead Actress Academy Award?

One can blame the script all they want (and yes, it is a pretty lousy script) but some of the blame has to go to Berry.  The double-entendres were forced, she looked as if she didn't know what was going on (well, at least she was with the audience in that), and no one bought for a minute that she was some sort of covert agent herself.

There was talk of giving Jinx her own spin-off, but that's like giving River Song from Doctor Who her own spin-off: a dumb (in every sense of the word) character who gains inexplicable popularity.  How else to explain this...

I sure do pity the fool...wait a minute.
Is that on their upper LEG?
What, are they DUMB or something?!

Bless Claudine Auger...yes, she's beautiful, but like Channing Tatum not a hint of emotion came from her Domino.

Think on it: her brother was murdered by her lover, but it somehow doesn't seem to register.  Domino is a remarkably passive and weak person.  That in itself could be forgiven, it it were played convincingly.  However, Domino looked borderline catatonic in Thunderball, almost drugged.  A man was shot with a harpoon in front of her, and she doesn't appear to react.  It was a bored, dull performance, but it was virtually a Method Master Class compared to...

...the remake version of Domino in the remake of Thunderball.  Here is another case of an Oscar-winning actress who is considered a bad actress (or is it a bad actress that managed to win an Oscar, although in her defense Kim Basinger gave a brilliant performance in L.A. Confidential...or at least better than Old Whore, I mean Rose, from Titanic).

Perhaps it's just the character of Domino.  Maybe no actress could make this passive, dim, almost unbearably stupid woman interesting.  Basinger looked even more out-of-it than Auger: blank, expressing nothing.  When Largo is slapping her around, it doesn't appear even that will wake her up. 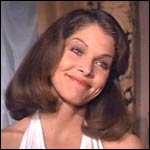 Here's proof positive that one can have a provocative name (although I don't see what's so provocative about Holly) and have a simply terrible Bond Girl.

Lois Chiles looks bored in Moonraker.  She is suppose to be a brilliant NASA-level scientist/astronaut/CIA agent, but she doesn't convince anyone that she is smart enough to realize Bond isn't just some crazy dude following her around.  Chiles appears to show only one expression throughout the film: contempt.  She doesn't want to be there, she just wants to get it over with, and she's not going to bother pretending she's enjoying any of what she considers nonsense.

If anything, I'd guess based on her performance in Moonraker that Chiles simply thinks she is above the material.  I'm one of Moonraker's defenders as just a good time, but Chiles looked dumb, bored, and her complete lack of chemistry with Roger Moore makes it even more painful.  When she says, "Take me around the world one more time," she looks as if she's coming out of hypnosis while saying it.  For a film as derided as Moonraker, Chiles gives one of the worst performances in film; not just in a James Bond film, but in film generally.

Finally, I confess to rewinding a scene with Chiles, where Bond grabs her in the dark.  Her facial expression of "shock" is even funnier than anything involving Jaws and his Little Swiss Miss girlfriend. 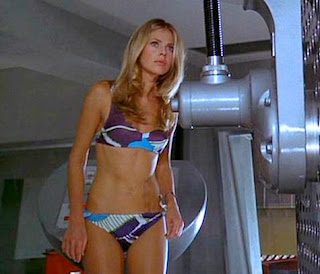 05.) Mary Goodnight (The Man With the Golden Gun)

Goodnight is among the dumbest Bond Girls in the entire franchise, a woman so shockingly inept she makes Maxwell Smart LOOK like James Bond.  She manages to get herself locked in the villain's trunk while holding valuable information and is genuinely shocked, SHOCKED, when she realizes Bond can't find her.  She is so dumb she doesn't appear able to leave the wardrobe Bond has put her in so as he could have some sexy-time with Miss Anders.  One would almost feel sorry for her (since she obviously is half a brain short of being a half-wit) but Goodnight quickly makes you root against her.

Even worse, she is frightened of the midget Henchman Nick Nack.  Maybe it was all meant to be a big joke...then it would have worked beautifully.  Otherwise, Say Goodnight, Mary... Deer in the headlights.

All right, we've had dumb Bond Girls before, but not one that appears not to know what the word "geologist" actually means while trying to convince us that she is not just a geologist, but the STATE Geologist.

Let's leave the fact that Stacie Sutton looks old enough to be James Bond's GRANDDAUGHTER (let alone daughter) in A View to A Kill (amping up the creepy factor).  What really kills Tanya Roberts' Sutton is that her line reading is just that...reading lines.  She never expresses any emotions.  Whether it's discussing Max Zorin's nefarious plans or her late grandfather (and no, it isn't 007's elementary school classmate) or discovering how Zorin will kill millions of people, she says it all the same way.  That is, she sounds more convincing when talking about soufflés than talking about mass murder.

Add to that Stacie Sutton is the weakest woman Bond's ever had the pleasure of sleeping weak: constantly screaming and almost incapable of defending herself.  Please, some Doctor Who Companions screamed less than Stacie Sutton...and they faced Daleks!

You know what's so terrible about Kissy Suzuki?  The fact that she did NOTHING as a Bond Girl.

For most of You Only Live Twice the main action involved another Japanese girl, an agent named Aki.  In one of the worst decisions made in a Bond Film, Aki was killed off, and in return, we got Kissy.

Given how ugly YOLT is regarding racial images (the idea that Sean Connery, with a little make-up, could pass convincingly as a Japanese man would have been insulting then, and shockingly idiotic/insensitive now), the image of the docile, demure, thoroughly subservient Japanese woman ought to be more evidence in damning the film.

Worse, Kissy was not a major factor in anything involving YOLT.  She didn't fight, she didn't think. Most of her time was spent running around in her bikini, running off to warn MI6 and their Japanese counterparts and telling them where SPECTRE's volcano lair was.  That's about it.

Kissy did nothing in the film, so how she ended up as the Primary Bond Girl when the more interesting and active Aki was bumped off (in a thoroughly ridiculous way) is another mark on one of the lesser Bond Films.

She had been my Worst Bond Girl for a long time, but then we entered the 21st Century, and found some real doozies.

02.) Dr. Christmas Jones (The World is Not Enough)

Yes, this is what ALL nuclear scientists wear while working to disarm nuclear weapons, why do you ask?

It is clear almost from the get-go that Denise Richards was WILDLY miscast as Dr. Christmas Jones, nuclear scientist.  I say 'almost' because I'm a generous soul, and I was willing to give her the benefit of the doubt.  It wasn't until this "brilliant nuclear scientist" didn't have the sense to run, move, or react to a hail of bullets flying at her that I just gave up.

It isn't just the fact that Denise Richards is not an actress (actress in the 'convincingly portraying someone other than yourself' definition of the term).  It's the fact that she makes one hideous mistake after another.  A Good Bond Girl doesn't draw attention to her unique name; as far they were concerned, there is nothing peculiar about being called Pussy, or Goodhead, or Plenty O'Toole, or Onatopp.  Christmas Jones, on the other hand, made it obvious we were going to get puns.

And oh, what groan-inducing puns we got.  Christmas was never so tawdry or vulgar.

We also got in Christmas Jones someone who clearly had no idea what she was doing, let alone what was going on.  By even the obscure plot of The World is Not Enough, Jones looked perennially confused: about what was going on, about even who she was.  In the pile of debris known as The World is Not Enough, Dr. Jones could have used a Short Round to help her: help her figure out the story, help her act, help her think.

Now, the Worst Bond Girl of All Time Is...

We're never formally introduced to Camille Montes.  She just basically pops in and we (like the cast and crew of Quantum of Solace) basically have to figure it out for ourselves.  Something about revenge or something...

She doesn't look as if she even likes James Bond in QOS (given it's Daniel Craig, who probably scowled at her during filming, it's more than likely closer to the truth).  Therefore, it makes her kiss at the end of the film even more puzzling (and for something as chaotic as Quantum of Solace, that's saying something).  I should note that this is a Bond Girl...one whom doesn't sleep with Bond, and one who kisses him for the first time at the END of the movie.  What kind of Bond Girl is that?

Montes is the Worst Bond Girl simply because she gathers all the qualities of Bad Bond Girls (stupidity, lack of involvement with the action, a disinterested take on the proceedings) and throws in something uniquely her own: no sexual interest in 007. 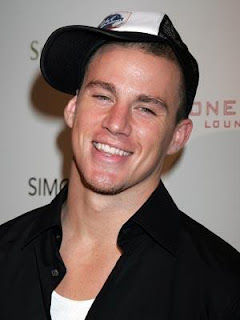