I Sense A Great Disturbance In The Force

I've been away on holiday (aka vacation) this past week.  As it so happened, I went to Disneyland and assorted theme parks (Universal Studios and Legoland...yes, Legoland...get off my back) and it is only now that I have returned.

It seems the way of the world that when one goes away for a wee, something big happens.  It was on Halloween night, after leaving the Disneyland Park and going to the Disneyland Hotel gift shop that I glanced at the Los Angeles Times.  I then read a shocking story that made me desperate to return to the Texas Homebase and write furiously.

George Lucas had sold Lucasfilm Lmt., to the Walt Disney Corporation for $4 Billion.

My first question was, "Has Lucas, already slipping into a Charles Foster Kane-like existence up in his Skywalker Ranch, finally joined the Dark Side?"

The Disney Company has not shrunk from capitalizing off the features it is partially responsible for.  Take a look at all their work with the Pixar Company.  All the Disney-Pixar films, from Toy Story to Cars, have found themselves part of the behemoth of the Disney universe.  There is Cars Land and Toy Story Mania, even it's tough to be a bug (from A Bug's Life).   One thing that seems certain is that Star Wars will also, to coin a phrase, be Part of That World.

The question then becomes, will Star Wars now also be just another themed world within the realms of Florida?  Will we see a whole theme park where you can journey to Tatooine or a rollercoaster where you ride through Hoth to escape the Wompa?  Maybe stay at the Death Star Resort, make reservations at the Mos Eisley Cantina for a Wookie Cookie Cake, and make Amidala another Disney Princess.

Truth be told, we already have had a Disney-Star Wars axis.  Those who have been at Disneyland/DisneyWorld know that there are already Star Wars rides.  We also have had Disney characters dressed as Star Wars figures, so in a sense the purchase of Lucasfilm by Disney only enhances the connections that is already there.

Lucas' other product, Indiana Jones (which now also is in Uncle Walt's grasps), is also part of the Disney Empire.  DisneyWorld has a live-action show and Disneyland has an Indiana Jones ride (sadly closed when I was there).  Therefore, having Disney and Star Wars join forces only solidifies what has already existed for decades.

Finally, Star Wars has pimped itself out to all sorts of things.  Let us not forget that there is a Star Wars section at Legoland.  If anything, I think George Lucas has taken a page from Walt Disney in commercializing their product.  Remember, Disney was saved financially by licencing Mickey Mouse to sell watches and dolls, and later on those ubiquitous mouse ears that are part of so many childhoods (and adulthoods).  Likewise, George Lucas commercialized films to where merchandising is almost expected.  All films post-Star Wars that have even a hint of figures will be exploited, sometimes to less-than-stellar results (where are your Dick Tracy toys).

However, we now have the real possibility of seeing Star Wars, this iconic thing held in awe by millions of people, be even more commercialized than it already has.  A Star Wars theme park is now a serious possibility, more theme rides built around this galaxy far, far away.  Will it cheapen Star Wars to its fans?  How will being introduced to Luke, Leia, Han, and Darth Vader via a mouse, a duck, and a Goofy affect those who will see the films after enjoying the rides?

One thing is for certain: expect that The Great Hollywood Ride at Disney Hollywood Studios in Orlando will get a little longer now.

Frankly, I don't understand whether some Star Wars fans will be dismayed at the idea that 'their' precious mythology is now in the Royal House of Mouse.  Both Disney and Lucas have raised milking their creations for cash to an art form, and both have found themselves at times creatively bound to their creations to the detriment of their other work.  When people think Disney, the first thing they think of is Mickey Mouse, not 20,000 Leagues Under the Sea or TRON.  When people think Lucas, it's always Star Wars, not American Graffiti.

As part of the Lucasfilm/Disney merger, we are now promised Star Wars: Episode VII by 2015.  That's a mere three years from now, and as far as I'm concerned that's where the real fun begins.

I've never been a big-enough Star Wars fan to think there should be a film that takes place after Return of the Jedi.  As far as I was concerned, the story was finished: the Empire had been defeated, Darth Vader had been redeemed, and Han & Leia were together.  And we had dancing Ewoks.  According to the Los Angeles Times article, we have the promise of a new Star Wars film every three years.

There is a great danger that the story so beloved by the fans will soon dissolve into a mere series of sequels made not for any artistic aspirations but for some quick cash.  The prequels to Star Wars: A New Hope (The Phantom Menace, Attack of the Clones, Revenge of the Sith) were all quite terrible, but the fans, especially the hard-core ones, all lapped it up.  No doubt they will do so also for the post-Return of the Jedi films, and they will also become canon to the overall Star Wars mythos.

The Four-Billion Dollar Question is, 'Will they actually expand the story or just bleed it dry?'  Lucas created a treatment for the next three films, but there's no guarantee that the boys in the boardroom will follow the outline, let alone care to tell good stories.

Where will the story go?  You no longer have Anakin, the Sith, and while Harrison Ford can still swing into action at 70, seeing him fight remnants of the Empire stretches credibility. 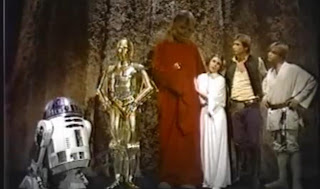 Knowing that the Disney Corporation will suck every last cent it can out of anything it has it hands on, I suspect the growing temptation to release (FINALLY) the Star Wars Holiday Special on DVD.  Yes, the Holiday Special is an absolute disaster: a mind-boggling, mind-numbing sordid spectacle that one watches in stunned disbelief.  However, here is a chance to make Star Wars money out of the ever-desperate fans.  Here is the Holy Grail of Star Wars: the most infamous chapter in Star Wars history, and so far Lucas has been the only thing blocking the Holiday Special from seeing the light of day.  Will Disney follow Lucas' example and keep this unavailable, or will it bring this most-bizarre yet I'd argue canonical chapter to Star Wars out of the closet?

In the end, Disney's purchase of Lucasfilm is monumental no matter if you love Star Wars or don't (and yes, there are those who don't care for the Force...I'm talking to you, Mom).  It is the uniting of two powerful entertainment forces.  Those who revere Star Wars might look warily at how Disney might over-market the product with possible theme parks and a series of (perhaps) weaker and weaker films.  However, perhaps with the experience Disney has, perhaps that long-gestating Star Wars television series might come to life...and maybe we'll have another Star Wars Holiday Special, where Darth Donald fights Yoda for ultimate control of the galaxy.