Nipples and Palm Trees: A Review 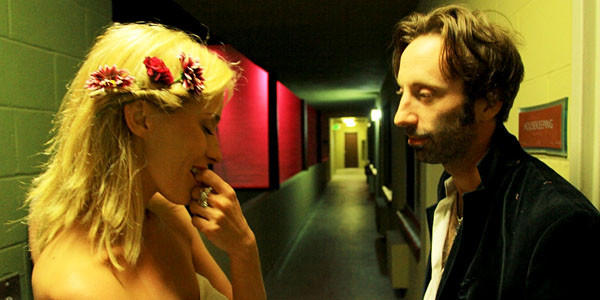 I don't want to beat up on independent, low-budget films.  I'm not someone who is blown away by big effects.  I understand those who make smaller films have a smaller budget, so I cut them some slack.  One can't measure something as gargantuan as The Avengers with something like a Heaven Strewn, so I look at things as they are not as either I or the filmmakers would like them to be.  Even by that standards, Nipples and Palm Trees is an ugly film: perverse, unbearable, nonsensical, and desperate to try to be witty, even funny, when instead it comes across as a porn film that left out all the graphic sex and kept whatever excuse they use for a plot.

It also has an off-putting title that signals that the hour-and-a-half you'll spend with it is rather creepy.

Jackson (screenwriter Matthew James) is a struggling artist who works at a dead-end job calling about printer toner.  His co-worker is Phil (Akihiro Kitamura), a thickly-accented Japanese man but the closest thing our protagonist has for a friend.  Jackson is a strange contradiction: a man who claims to want to find True Love but who is also obsessed with getting as much sex with as many women as possible (this inconsistency is important in terms of both review and story).  Whether it's getting a hand job from a woman he's hit on within five minutes of meeting to finding another girl who wants to partake in giving blow jobs to Jackson and two other men the same night (what I understand is called a gang-bang), Jackson indulges in sexual escapades but conversely appears to pine for Harmony (Sadie Katz) a girl he appears to be in love with (even if the extent of their relationship is to argue and have sex, have sex and then argue). Nipples and Palm Trees ends with Harmony & Jackson having a faux-wedding but things generally unresolved.

I like to think that within every movie, even bad ones, there is a hint of a story that with more thought could have been good.  Nipples and Palm Trees, I imagine, has something somewhere within James' screenplay that could have served as an interesting tale, but it comes pretty close to being a film that doesn't want to do anything except bore and depress us.

Mistake after mistake after mistake plagues Nipples and Palm Trees, starting with a perplexing title.  I suppose it refers to women in California, but it's an opaque title that really tells us nothing about what the story is,  except perhaps that it might relate to sex.

Here's another ghastly mistake: tackling a story that's already been told, and told better.  Nipples and Palm Trees reminded me, I'm sure unintentionally, to The 40-Year-Old Virgin.  We have the similarity of two guys who are looking for love in all the wrong places and the really bizarre women they keep finding who want to do "the nasty" in the nastiest way.  However, the primary difference between 40-Year-Old Virgin and N&PT is that we got to know and actually care about Andy, our 40-year-old.  Andy's reasons for not sleeping with the women who wanted to sleep with him were at least shown and his plight (while amusing) had an emotional aspect.  In N&PT, Jackson is not looking for love; he's looking for sex, and the two are not the same thing.

I actually felt embarrassed for the women in N&PT, especially the Hand-Job Girl.  I never understood why this random girl would not think anything of exposing her breasts to someone she had not just met, but not even gotten their name.   I would have thought she was clearly mentally ill and having Jackson not stop and say to himself, 'Maybe this isn't the best idea' makes him creepy.  In fact, I thought Jackson was extremely creepy, not likable by any stretch (his genuine anger at being denied a romp with a seemingly-nice and clueless masseuse a particularly ugly moment), and this is someone we can't pull for or care about.

Jackson is a thoroughly unlikeable, unpleasant, rather grotesque person: selfish, sex-obsessed, and even a bit homophobic.  When Phil pats his back in an effort to comfort him for his love woes, Jackson appears to think Phil's hitting on him.

Add to that James' (as well as director Dylan Reynolds') bizarre decision to make Jackson a bit of a mumbler when delivering his lines.  It wasn't so much that one couldn't understand what he was saying so much as if even HE looked bored being there.  Imagine how we felt.  His mumbled delivery might have been an effort to be more...artsy, perhaps...but it only proved more aggravating. At first I thought his name was Tom, then Bob, before FINALLY finding it was Jackson.

That is in regards to James as an actor.  James as a screenwriter proved equally inept.  I kept wondering how he kept finding all these freaky women, or why he would never stop to reject them, or set things up better.  Take for example when he is looking at pictures a one-night stand took of herself and 'the naked Mexican' he had seen.  Let's leave aside for a moment that Jackson apparently found it easy to find that said one-night stand who had taken his camera.  He's looking at the pictures (which would have ended up in the Deleted Scenes from a bad, really bad, comedy) while driving.  I actually thought that he should have pulled over (the logical thing to do).  No, as expected he crashes.

Finally, I would offer my advise to Matthew James in terms of script writing: DON'T copy Saturday Night Fever AND make it obvious you're doing so.

At the end of Nipples and Palm Trees, I wondered whether all southern Californians were this sexually deviant?  I don't remember seeing all this shenanigans when I went there last.  Granted, I was in WASPy Anaheim, so maybe I didn't get the full tour.  Still, for a film that wants us to care about this man's search for true love in a land of endless and easy and bizarre sex, Nipple and Palm Trees only showcases just how horrible people are, how the temporary (though pleasurable) sexual sensation trumps everything else.

I think the best way I can describe what I thought of Nipples and Palm Trees is thus: the movie ended, I took it out of the DVD player, I opened a window, and flung it out of said window.

Nipples and Palm Trees may well put me off sex.

Nipples and Palm Trees is a Film that Will Live in My Nightmares.