However one cuts it, this simply can't be a Happy Thanksgiving for Kevin Clash.

I watched Being Elmo: A Puppeteer's Journey and was charmed by Clash's journey from Baltimore poverty to success as a Muppeteer, creating the voice for Elmo, one of the most iconic Sesame Street characters.  In Being Elmo, we followed Clash from starting out with creating his own puppets to finding a mentor in Kermit Love, a master puppeteer who worked alongside Jim Henson.  Eventually, Clash's talent and hard work brought him this puppet no one knew what to do with.  Clash eventually found the perfect voice for Elmo: that of a sweet, caring child discovering the world.

The issue of children is now what has brought Clash shame not praise.  After 28 years at Sesame Street and a lifetime of awards and creativity, a sorry and sordid sex scandal has soiled Kevin Clash's reputation and dragged the furry red monster into a crisis.  Clash resigned from the television show when a second man accused the puppeteer of having sexual relations with him when the accuser was underage.

Clash has denied that he was involved in any sexual relationship with underage boys, but has come out of the closet and admitted to being gay after acknowledging that there was a relationship with the first accuser, though Clash insisted it was when both were adults.  The first accuser shortly afterwards recanted his original story and confirmed that their affair was between consenting adults.  Now, with Accuser Number 2 emerging and suggestions there were more, it was one storm too much for Clash to have survived.

This whole situation is sad and tawdry in so many ways.  Either Clash is innocent or he's guilty, one or the other.

Let's figure that he's innocent.  If he is, then Clash is being dragged through the mud for a chance at quick cash.  Accusations of child abuse, especially sexual, are particularly heinous even in this particularly permissive society of ours. Clash's reputation, all the good work he's done, is being trampled underfoot due to lies, his life made into a sordid tabloid story where a figure beloved by children is being tainted by association.  It becomes nothing more than a shakedown of someone in the public eye with a fortune to be made by accusers and attorneys.

If he's guilty, then it becomes far more horrifying.

Clash's sexual orientation is not the issue: Kermit Love himself was gay and no one thought anything of it.  It is in the objects of his alleged affections that one must take pause at.  The accusers state they were 15 and 16 when Clash approached them for sexual contact (though not intercourse, a phrasing that leaves me puzzled).  Clash was an adult, capable of telling right from wrong; regardless of whatever physical desires lurked within him if he did not appreciate that pursuing underage boys or girls was wrong (the gender ultimately is irrelevant for it would not make either right) then Clash needed at the very least psychological treatment.

Unfortunately, the fact that is is a gay man being accused of being a virtual sexual predator (one can only imagine the parodies of Elmo being questioned by Chris Hansen) brings up all the old stereotypes of how gay men are sexually deviant and are 'after our children'.  The wicked ghost of Anita Bryant has been summoned thanks to Clash's work with children mixing with his alleged desires for sex with underage boys.

As a digression, I wonder that given how much time Clash must have spent with Love, whether he ever approached his mentor about how he too preferred sex with men over women.  It seems surprising to me that Clash never once thought to speak with Love about his own homosexual or bisexual issues.  Clash must have observed Love with his long-term partner, so how in a more open society Clash continued to keep silent when a divorce and acknowledgment of his sexuality would not have created anywhere near the maelstrom this has is beyond me.

His connection with children, especially toddlers, is what makes this story far more hideous.  The idea that a man who worked with children could himself have pursued teens for his own sexual gratification is frankly too dark to contemplate. 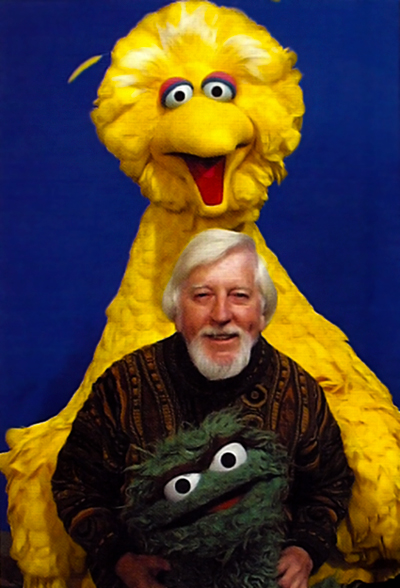 I can only express dismay at this whole sorry episode, and now wonder whether it is a good idea for one man to be so identified with a character.  Carroll Spinney has been Big Bird for decades, but he's never had the fame that Clash and Elmo have.  It now appears to have been a terrible mistake to have so made Clash and Elmo so mutually identifiable one with the other in the public mind.  Clash's fall from grace has only served to tarnish them both.

As is the case, Kevin Clash is innocent until proven guilty in a court of law, not public opinion.  It is a capital mistake to reach conclusions without the data.  The truth will eventually be revealed, one way or another.  At the moment, Kevin Clash's reputation is being torn in tatters, he is unemployed (perhaps unemployable given the nature of the accusations), and now his biography will be marked with shocking charges.  I can't say whether Kevin Clash is innocent or guilty.

I can only say that seeing this is so sad.
Posted by Rick at 6:50 AM