Ya Vastra. Thoughts On a Madam Vastra/Jenny Spinoff 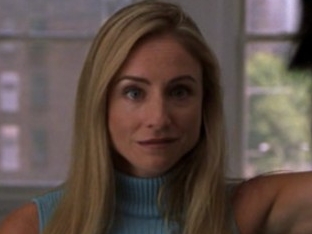 It's strange the things one remembers.  I remember an ad for a Law & Order: SVU episode where the voice said, "Tracy Pollan in a rare television appearance".  I was so taken aback that this particular guest star was being made the selling point of this story that I shocked even myself when I snapped back at the television, "In a rare ANYTHING appearance!"  I said this because I figured that, unlike most Americans, I knew who Tracy Pollan was.

She is the wife of Michael J. Fox.

I'm sure if I met them, I'd be enchanted, but forgive me Miss Pollan: you are not a major enough name to warrant any excitement over your "rare television appearance" on Law & Order or any other show.  If it had been Meryl Streep or Jack Nicholson, then it would have made sense.  But Tracy Pollan?  Nothing against her, but seriously, when was the last time the name "Tracy Pollan" had you running to the cinema or the television?

If it were not for this post, would you have even heard of Tracy Pollan?

There is a reason I dragged poor Mrs. Fox into this.  In the same way I was puzzled by the promotion of a two-part Law & Order: SVU story as a triumphant return for Miss Pollan (there is a certain Norma Desmond-esque quality to that, isn't there?),  I am likewise puzzled by the popularity of two guest characters on the long-running British sci-fi show River Song (Formerly Known as Doctor Who): Madame Vastra and Jenny.

At least that's my memory of it...I so hate River-centric stories I really can't recall.

Now, as I ponder the popularity of Madame Vastra et Jenny, I went over my own review of River's Secret Parts 1 & 2: A Good Man Goes to War/Let's Kill Hitler.

In regards to the characters themselves in that River Song episode, Madame Vastra and Jenny made such little impact that I didn't even mention them in my review.  In fact, even now their characters to me are so forgettable that I still can't get the Silurian's name right.  Try as I might, I keep calling her "Madame Vestra" rather than "Vastra".  I just can't remember (or care to remember) this bit character's name.  In fact, if one watches the trailer for AGMGTW, Madame Vastra and Jenny aren't even in it.  Strange how that is, isn't it.

What truly amazes me about Madame Vastra and Jenny is how despite one appearance in one episode of a two-part story where their total on-screen time was at the most under fifteen minutes, various NuWho fans are so enthralled with them and think they are these ICONIC characters that they demand a spin-off television series around them.

I know I'm a bit-old fashioned in my way of thinking, but somehow, watching the adventures of a homosexual interspecies couple does not scream "family entertainment".

I digress to say their sexual orientation as presented is frankly by now a bore, even predictable, rather than daring.  Robertson Davies was right: "The love that dare not speak its name is now the love that won't shut up."  Homosexuality on television (including television shows based around gay characters) simply isn't that shocking and innovative.

What would be shocking, even avant-garde would be to have a happily married heterosexual couple.  Making them both intelligent and religious (be it Christian, Jewish, or Muslim...take your pick) would be downright revolutionary.  Therefore, the fact that Madame Vastra and Jenny are lesbian lovers frankly is not shocking (though questionable whether a program geared towards children should have any discussion of sex, straight or gay).

What is, to me at least, repulsive is that Madame Vestra..sorry, Vastra (STILL can't get the name right) and Jenny's 'romance' is virtually bestiality on television.  No matter how you cut it, it's a non-human involved romantically (and sexually) with a human.

I don't want to see a lizard making love to a human, period, and don't comprehend why anyone else would want to, let alone declare it a 'great romance', one worth a television series.

I simply don't understand why characters that were in one episode with a small amount of screen time could possibly merit a spin-off.

I wonder about those who would want to watch a weekly series about a female reptile in love with a female human who fight crimes in Victorian Britain.

Let's consider this for a moment.  A weekly series involving two characters that were on one episode of a two-part story.  I can't imagine anyone celebrating a show with a scene of a lizard having gay sex with a human, but then again I am someone who still reads for pleasure and doesn't find Shakespeare confusing.

From what I see and hear, NuWho fans have a Spin-Off Fetish.  It seems that EVERY character Doctor Who 2.0 has, even a minimal guest character, has passionate fans who cry out for more stories separate from the Doctor Who mythos.  They got their wish with Torchwood, a spin-off for Captain Jack Harkness (or as I lovingly call him, The Intergalactic Nymphomaniac) first introduced in The Empty Child Parts 1 & 2 (The Empty Child/The Doctor Dances).  A similar situation emerged with The Sarah Jane Adventures, where Sarah Jane Smith got her own show after her return to Doctor Who in School Reunion proved a hit.

A side note: Sarah Jane HAD previously been the source for a potential spin-off, K-9 & Company.  Only one episode was ever produced: A Girl's Best Friend, and nothing more came from it.  Curiously, that episode wasn't all bad and had potential, but at least it was built around two well-established characters.

Rose Tyler, the NuWho's first Companion, had a spin-off/annual special in the works: Rose Tyler: Earth Defence.  That never came to fruition, but I've heard others call for spin-offs for roly-poly Craig Owens (of The Lodger and its sequel, Closing Time) as well as spin-offs for the central Doctor Who character of River Song.

(I've long argued that River Song is now the de facto star of Doctor Who, but that's for another time).

GIven the NuWho's mania for spin-offs, I'm genuinely surprised the NuWho fans haven't demanded a spin-off for Winston Churchill or Vincent van Gogh.  We Need to Know Whatever Happened to Them! 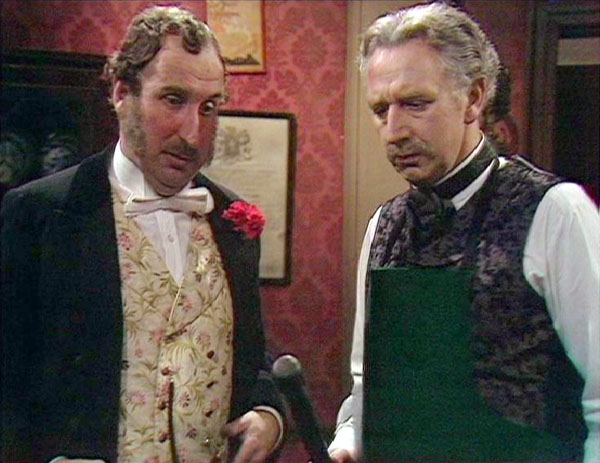 The only time I can recall when characters from a Doctor Who story were seriously considered for a spin-off were the characters of Jago and Litefoot from the Fourth Doctor story The Talons of Weng-Chiang.  They have gone on to helm a successful audio series of adventures, but the difference between Jago & Litefoot versus Madame Vastra and Jenny are tremendous.

In that time, the public had a chance to see the guest characters grow and become more important as the story developed.  The length of Talons allowed them a chance to build in the public mind, to be a continuing presence on the screens.  However much the rabid NuWho fans may claim to the contrary, that simply isn't the case with Madame Vastra and Jenny.

Jago and Litefoot were also an integral part of Talons of Weng-Chiang.  They weren't two characters that just popped in briefly.  They were almost Companions to the Doctor.  Can the same be said of Madame Vastra and her cross-dressing lesbian lover Jenny?

﻿
For the life of me I cannot understand why two secondary characters would inspire such passionate devotion (fan-fiction, artwork, hopes for more stories involving them, an entire mythology built around two characters that weren't even integral to the main plot they were featured in).  I could live with the idea of audio stories about Madame Vastra & Jenny (albeit with high reservations).  However, what is so good about these two characters, or Captain Jack, or River Song, that would make one want to watch them week after week?  I can't speak for Torchwood given I've never seen it, but I think Torchwood is its own thing and bares now only a minuscule connection to Doctor Who.

Fanboys (and girls), allow me some words to the wise: not every guest star deserves a spin-off.  Yes, good shows can be made from characters previously seen on other shows.  The Mary Tyler Moore Show had three: Phyllis, Lou Grant, and Rhoda.  All In the Family had Maude (which in turn had Good Times) and The Jeffersons.  Cheers brought about Frasier.  Angel sprung from Buffy the Vampire Slayer.

However, there is a marked difference.  All the spin-offs mentioned were based on recurring characters, not guest characters.  Second, not every show, even great ones, deserve a spin-off.

Remember The Golden Girls' spin-off Golden Palace, or AfterM*A*S*H, or the Three's Company's The Ropers, or 227's Sandra Clark spin-off Jackée?  In the same vein, why do Madame Vastra and Jenny, or roly-poly Craig Owens, or River Song, deserve a weekly program about them? What makes them THAT good?  Why do you get more excited over guest characters than the central character?

If there is a Madame Vastra & Jenny Show (The Lizard & The Lady, perhaps?), might I suggest a Spin-Off based on a character they've worked with: a Time Lord from the planet Gallifrey who goes by "The Doctor"?  Might make for a good series...