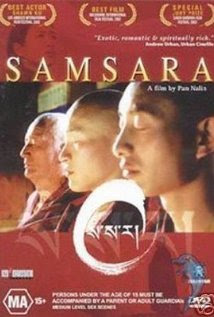 On Human Beings Being Human...

I'm not particularly fond of self-consciously artsy films.  I think Pina had soured me on basically dialogue-free films devoted to the arts and/or culture.  Samsara, therefore, made me a bit wary about a film that has no plot per se, no dialogue or voice-over, and relies on grand visuals and music to string together the film.  I feared erroneously: Samsara, minus one off moment that veers into weirdness, is a visual and intellectual feast.

Travelling the Earth from the sacred to the mundane, from the spectacular to the horrifying, from the beauty to the tragedy of human existence, Samsara is nothing less than a meditation on life and death, that which survives and that which evaporates, between that which changes and that which remains the same.  It does make the film seem rather esoteric and remote, but Samsara is far from that.  Instead, by not saying anything, Samsara allows one to form their own ideas IF one gives it a chance and one uses their minds to put things together.

Allow me to explain.  With Ron Fricke and Mark Magidson's (the director and co-scenarist respectively) skillful editing we get a series of juxtapositions that not only blend seamlessly within the film but get the connection between the images.  For example, early in the film we see the ancient ruins of Egypt, then we are taken to the ruins of New Orleans post-Katrina, then to the palace at Versailles.  It is without any commentary (the film is silent except for the music, but more on that later), but it is for us to find the connections.  Civilizations, Samsara whispers to us, come and go, sometimes leaving traces of glory, sometimes traces of shame.  We also can see both the failings of humanity and the glories of it.  We make the connection between the shattered Ninth Ward and the lavish French palace.

The horror of Katrina.  The glory of Versailles.  The folly of man, the beauty of man.  The power to destroy and create.  Samsara has on meditate, think on those things.

Again and again we see both the permanence of man as well as man's fleeting presence on this perpetual planet.  In another quick but beautiful moment, we are shown an unborn child in the womb, and just as we see the child, we shift to a long-dead mummy, almost in the same sleeping position.  We are subtlety reminded that the mummy was once an unborn child him/herself, and that the unborn child will also meet the same fate as that frozen corpse.  Samsara doesn't have to spell things out for us; instead, Fricke and Company trust us to put things together.

The film has some truly stunning visual images of the world, and it's not surprising given it was filmed in Panasonic 70mm.  Samsara is a visually splendid film, one that cries out for IMAX and filled with powerful images: even the trash we humans dispose of is beautiful if made with slow-motion and with the majestic score.

Let's move on to the music.  The score by Michael Stearns and Dead Can Dance's Lisa Gerrard is something is something that would fit easily into a Music From the Heart's of Space broadcast, but perhaps with one or two moments of total silence (usually while we are flying over a vista), we can see how this New Age-style fits within the imagery.  However, I don't want to say that there aren't moments where we can't see Stearns and Gerrard couldn't make something for the clubs.  There is a sequence where we are treated to the famous Cebu Provincial Detention and Rehabilitation Center's CPDRC Dancers where the music would work to make anyone dance and could make for a successful remix by someone like Deadmau5 or Andy Hunter.

We see how things in life are all connected: a montage of three heavy-set people eating fast-food follows with one overweight man preparing for liposuction, then to general plastic surgery, then to the perfection of plastic dummies and even to the perfection of the Ladyboys of Bangkok.  What IS beauty?  What IS faith (the musical and visual blending of Islamic to Christian to Buddhist music and houses of worship: Mecca, St. Peter's, Potala Palace being beautiful and showing the similarity in the human experience)?  These questions are presented to us visually, but we are not given any answers.  Those are for us alone to find.

The ONE moment in Samsara that I felt pushed it from being a masterpiece was a short sequence with a man who from what I gathered had become a human mandala.  This performance art not only looks bizarre, even downright nutty, but it takes away from the beauty of the human experience and the 'you are there' impact Samsara is going for.  I wish they had cut this self-indulgent pseudo-artistic scene that just came out of left field and left no impact except one of slight revulsion.

Minus that one off-moment, Samsara is a grand vision that casts a dispassionate eye on our planet: its splendor and folly, its greatness and miseries, its creations and destructions, its beauty and its bizarreness.  Samsara brings us strange sights from many worlds within this lonely planet, showing us how we are both incredibly unique and so similar to those who came before, will come after, and those who with whom we share this fantastic, fascinating, and contradictory world.