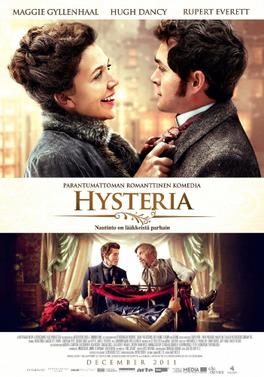 There is nothing funnier than Victorians and Sex.  We all know, after all, that the British who lived under Queen Victoria never had sex themselves.  Such things as homosexuality, menage a trois, and even how babies came into the world was something completely unknown to them.  As far as Victorians were aware, babies were grown in the garden, dusted off, and presented to unwilling parents.

Dr. Mortimer Granville (Hugh Dancy) is a man far ahead of his time.  He knows bacteria kills, and that good handwashing is essential to proper medical care.  For this, he's fired (yet again) from a hospital.  No doctor or hospital will have him...except one.  Dr. Robert Dalrymple (Jonathan Pryce) takes a shine to him, and the fact that he is in dire need of an assitant to his bulging practice also helps Granville's case.  Dr. Dalrymple is a leading expert on the women's disease known as 'hysteria'.  Dalrymple has come up with a unique treatment which is still practiced today: a specific scientific method today called 'fingering'.  OUr Victorian ladies find instant relief from all ailments thanks to the good doctor, and now Granville finds himself in high demand for his delicate touch.

One lady who doesn't suffer from hysteria is Dr. Dalrymple's daughter Emily (Felicity Jones).  She is the model of a Victorian lady: demure, properly behaved, but also quite the intellectual.  She is an expert on the science phrenology.  Granville and Emily soon start a tentative romance, highly encouraged by her father, who now sees Granville as a potential heir.

As for his other daughter Charlotte (Maggie Gyllenhaal), well, the good doctor doesn't care for her settlement house/suffragette/working-class supporting work.  SHE is not a lady, and she might even be suffering from hysteria herself.  While Granville continues his success, Charlotte continues her own socialist work.  However, eventually Granville is no longer able to handle his practice, and a disappointed Dalrymple has to dismiss him.

Granville, not willing to give up Emily, finds that perhaps an electric massager would put him back in the doctor's good graces.  With some help/inspiration from his friend and benefactor Edmund St. John Smythe (Rupert Everett) he reconfigures one of St. John Smythe's machines and voila...an electric massager.  The test it out on the Darlrymple's sassy lower-class ex-prostitute maid Molly (Sheridan Smith), who declares it a rip-roaring success.  Soon, Dr. Dalrymple is taken by the machine, and everyone wins.

Except Charlotte.  She continues her work despite Dr. Dalrymple's objections, and when he manages to take her settlement house from under her, she ends up punching a policeman.  Dalrymple believes his daughter is permanently lost to her hysteria, but in the end, Granville testifies that she is nothing more than a progressive woman, not crazy.  She's still locked up (she did punch a policeman) but in the end, Mortimer and Charlotte realize they were meant for each other.

Hysteria plays with the ideas we have about the Victorians (how stuffy and almost ignorant they were about sex) and takes a lighthearted take on the subject.  Hugh Dancy makes Granville both a man frustrated by the backward nature of the medical profession but also someone in his own way quite innocent when it comes to the pleasures of the flesh.  Dancy makes Granville one who is both a man who thinks greatly but who also is properly Victorian: respectful, not given to emotional outbursts, and both befuddled but accepting of his new medical practice.

Pryce is perfectly suited to Dr. Dalrymple, a man who truly believes his own oddball medical theories.  Never once does Dalrymple ever question either the logic of his beliefs or that there could be any suggestion that his treatments were indecent to say the least.  Pryce plays it straight (which he can't say for Tomorrow Never Dies, but that's another matter).

Gyllenhaal's British accent never fails, and Charlotte is a delight: bright, unafraid of life, and one who despite the limitations placed on her continues to keep to her path.  Equally good is Jones as her polar opposite sister.  While Emily might have come off as dim, Jones makes her into a woman with a mind, but one spent on a quackery that equals her father's.

Steven and Jonah Lisa Dyer's screenplay and story (from Howard Gensler's original story) never turned the people into idiots.  Far from it: Hysteria seems to have nothing but genuine love for those in our story, in their curious worldview, in their slow understanding that people do find pleasure in sex, and in their own encounters with beliefs that differ from their own.  Director Tanya Wexler guides the story mixing accidental sexual hijinks with a genuinely sweet love story between Granville and both Emily and Charlotte (depending on when he realizes whom he's in love with).

Hysteria is a sweet romantic comedy where the laughs come from the blending of Victorian propriety and the beginning of sexual awakening.  It moves well and its story is played both straight and for laughs.  It's a nice, simple story.

Besides, when has it not been funny seeing old ladies climax?