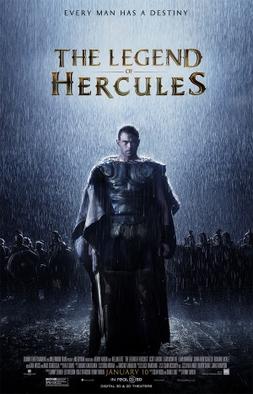 THE LEGEND OF HERCULES

A Legend Is Bored...

Last year, there were two competing 'White House under siege" movies: Olympus Has Fallen and White House Down.  This year, we have two competing Hercules movies.  The Legend of Hercules is the first one out, beating Hercules: The Thracian Wars by around five months.  Whether Thracian Wars will be any good is still a mystery, but despite what you may have heard The Legend of Hercules is not this horrendous disaster.

King Amphitryon (Scott Adkins) has just conquered Argos.  His wife, Queen Alcmene (Roxanne McKee) prays to Hera for a deliverer against her tyrant husband.  The Queen of Olympus hears her prayer, and tells her that her husband Zeus would come and impregnate her.  He does come to her invisibly, and she produces a strong, healthy son.  While the world knows him as Alcides, in truth he is Hercules (Kellan Lutz).   He is in love with Princess Hebe (Gaia Weiss), and while she feels the same she is betrothed to his older brother, Iphicles (Liam Garrigan).

From there, I think the story becomes a bit murky if not a bit odd to give an accurate description.  For reasons known only to the Olympians Hercules allows Iphicles to take credit for killing a lion.  For reasons known only to the Olympians Amphitryon and Imphicles want Hercules out of the way, and his and Hebe's attempted escape so they could be together allows the father/son duo that opportunity. Sent to certain death on a dangerous mission, only Hercules and his loyal second-in-command Sotiris (Liam McIntyre) survive.  They are taken prisoner and sold to serve as gladiators by Tarak (Johnathon Schaech), who I think had been assigned to kill them all.  However, Hercules (who at this point has taken this name against being known as Alcides) and Sotiris now have to fight their way from Sicily back to Greece before three moons time, before Iphicles and Hebe are married.


They do fight their way back to Greece, where Hercules begins an uprising against Amphitryon.  The King and Prince have no idea that Hercules and Alcides are one and the same, only that Spartacus...I mean, Hercules, is leading a rebellion that must be crushed.  Amphitryon has already killed the Queen after she tells him of her second son's true origin, and by killing Sotiris' wife and holding his son hostage, gain Hercules' capture.  They soon whip and chain him, but Samson...I mean, Hercules, now calling upon his real father and saying that he believes, breaks free from the bonds, and begins a final confrontation with his erstwhile sibling and father.

Now, I confess that what was suppose to be a climatic battle between Hercules and Amphitryon, I nodded off.  Part of it may be because the film is filmed in almost endless amounts of greys and blacks as to make so much obscure.  Part of it may also be that we rush through so much that we have no time to build any characters.  We hear talk of Sotiris' family but we really have no chance to know who he is, or who any of the characters are.  Story, plot, characters, are speed by that we are never grounded in anything.

Even if the story worked (which it doesn't), the performances are almost all so dull that we wouldn't be able to care.  Dear, dear Kellan Lutz.  He was a vampire in the Twilight series (excuse me, SAGA), so that should be explanation of his acting abilities.  Lutz has a great physique which the film goes through great length to showcase at every opportunity, but there is no emotion in his line readings.  Fortunately, Weiss is his equal in the blank reading department, conveying as much emotion as Lutz, which is none.

In the bad performances department, the real winner is Schaech, who not only has the unfortunate look of cornrows to deal with, but also adopts this bizarre Transylvanian accent that just sounds odd, even if almost all the other cast come from Eastern Europe.  Curiously, I spent a great deal of time wondering who Sotiris was, and it wasn't until I read the credits and found that it was Liam McIntyre, whom I finally recognized as Spartacus from the eponymous television series.

Oddly, I thought The Legend of Hercules would have been better with McIntyre in the lead.  Granted, he isn't as beefy as Lutz, but at least he gave Sean Hood and Daniel Giat's screenplay a stab at making it all believable.  He also has a leg-up in that he understands the genre and the requirements to perform it (a bit broad and slightly over-the-top).  I also thought well of the other Liam (Garrigan), who similarly took a stab at giving Iphicles a reason for his anger at his parents and brothers.  I think both Liams did well and tried to make the story work.

Even if the lousy performances could be forgiven or forgotten, director Renny Harlin's decision to simultaneously speed up and slow down the action scenes is the final nail on the head of The Legend of Hercules.  Take what could have been a great moment: when Hercules, all alone, faces off against six Greek fighting legends (exactly why I wasn't too sure and disinterested to care).  Instead of making this a fierce battle, it flows so quickly that the whole 'epic' battle is over within a matter of I would say two to three minutes...and that's counting the slow-motion.

The film could be a guilty pleasure, and perhaps even enjoyable if one doesn't think through it.  On the whole The Legend of Hercules (which I expect will not draw a sequel) is dumb, forgettable, and if there is nothing else on basic cable worth its mercifully brief running time.

Then again, I have seen only one film in 2014 so far, so I have nothing to compare it to.