The entire story of Her seems so bizarre, so laughable, so nutty, that it is extraordinary to see how, despite it all, it makes sense and even works.  If I were to say it's about a guy who falls in love with his computer operating system, you would be excused for thinking 'it's just a dumb idea'.  However, Her isn't about a man falling in love with an OS, but about how people are becoming so isolated emotionally in our growingly digital world that such things are plausible, right down to the sex.

Theodore Twombly (Joaquin Phoenix) is living alone after his wife Catherine (Rooney Mara) has filed for divorce.  While he has his job at Beautiful Love Letters dot Com, he himself is pretty lonely.  He can always have virtual sex with strangers he can talk to over the phone (I stress this is not the same as phone sex but close to it), but on the whole Theodore really has no one apart from his friend Amy (Amy Adams), who lives near him with her husband Charles.

One day, he decides to purchase OS1, an operating system with a conscience.  Once installed, he opts for a female voice, and that female voice dubs herself Samantha (Scarlett Johansson).  Soon, Theodore and Samantha start exploring each other's existence, her views and his willingness to open up to her like he hasn't with anyone else.  Somehow, some way, Theodore starts becoming emotionally involved with Samantha, and Samantha in return starts to reciprocate these odd things call 'feelings', culminating in a strange session of disembodied lovemaking. 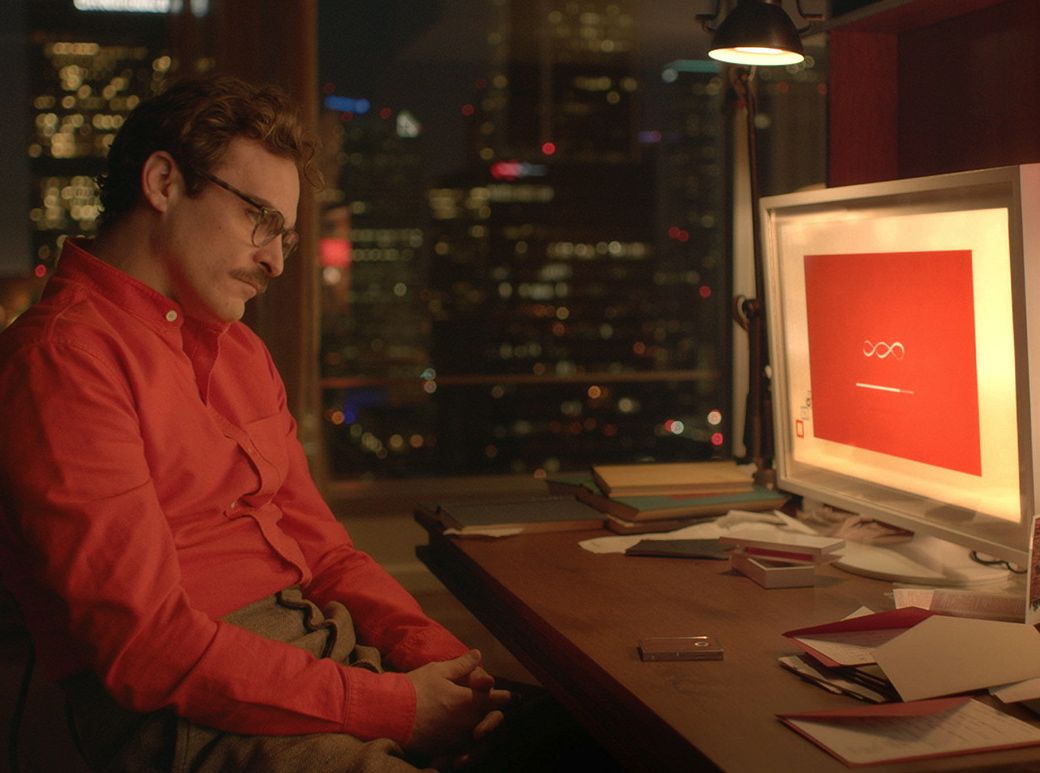 This situation, curiously, is not unique to Sam and Ted in this world.  Many people are having relationships with their OS, including Amy, who has broken up with her husband.  Things like these are so commonplace that Sam goes through the trouble of hiring a human surrogate to have sex with Theodore.  He tries with Isabella (Portia Doubleday), but he simply finds it all too bizarre: it is and it isn't Sam.  Samantha is upset by all this, and moreover, Sam wants however, to discover the world as she develops.

In the end, Ted finally signs the divorce papers, and his now ex-wife finds his new relationship proof positive that he cannot communicate with actual humans.  Sam, meanwhile, confesses that she loves 641 OS' but that it doesn't alter what she feels for him.  It does alter how he feels, and when she goes offline to find herself along with other OS', he has reached a place of peace.

I don't think Her is meant to be taken literally.  Instead, Spike Jonze is going for allegory, about how people are so isolated and unable to have deep emotional contact that artificial relationships with artificial beings soon become or may become the norm.  As Ted is 'making love' to Samantha, I could not see much difference between this encounter and that between Ted (going by the name Big 4 by 4) to SexyKitten (Kristen Wiig).  Both are not physical encounters, but audible ones.  The only real difference is that SexyKitten would have wanted just physical release, while Samantha would have been seeking out that thing called 'love'.

Even Theodore's profession indicates what Jonze wants us to get from his film.  Theodore is someone who writes deep, heartfelt love letters or letters of condolence for others.  I think Jonze is trying to say that people are no different than machines when it comes to true emotions or matters of the heart.  The idea that people now have to hire others to write things for them to me is as foreign as giving love (and making love) to a being that is not only not there, but that basically does not exist.  This is just a guess on my part, but I think Jonze is saying that there really is no 'substitute for love', which is what Sam is for Theodore.

It also shows Theodore to be in his own way quite selfish.  Samantha, as far as he knows, has no real existence or identity outside him.  When near the end of Her, he finds the message that "OS1 System Not Found" when he literally 'turns her on', he goes into a blind panic.  It is because he fears she is gone, or because she is not there when he calls her.  Seeing his devastation when he learns she's fallen in love with 641 other Operating Systems, one almost feels for him, seeing how he's given so much to this voice.

I think Joaquin Phoenix, for all the crazy in his own life, continues to show just how good an actor he is.  We see in his demeanor: his shy hesitancy coupled with a desire (though not the ability) to at best go beyond the physical and at worst not be able to communicate with a real person.  Phoenix does what appears impossible: make us believe that a man can if not actually fall in love with an Operating System, at least give himself so emotionally to one.  Johansson continues to show that she is not just a pretty face (though she is that too).  In Her, she cannot rely on her beauty, but instead squarely on her voice.  Johansson equals Phoenix's ability, going through the range of emotions from eagerness about the reality outside her own to a confused, even hurt feeling when he rejects her substitute.  Adams' performance, while smaller, is still a good showcase for her strengths as one of our best actresses around.  Granted, her disheveled look is a bit hard to take (she looks like she's escaped a looney bin), but I can't take away from her performance.

I also though highly of Arcade Fire's score for Her.  I'm probably one of the few people on Earth who doesn't know their music (or at least recognize it), but I found the mix of romantic and electronic music to be beautiful and natural to the subject: the automated and lush nature of the story.

Her makes this premise believable, and it has wonderful performances by Phoenix and Johansson.  It takes a great deal of talent to make something so bizarre work, and I am the first to say I'm not a Spike Jonze fan, but I give credit where it is do.  Her says so much about the strange nature of love and how we are slowly becoming so disconnected from others to where the idea that one can give emotions to a machine seems sadly plausible.