The pilot for The Americans gives us both the plausible (the Soviet agents working deep within the heart of the U.S.'s capital) and the implausible (whatever ARE the odds that a counter-intelligence FBI agent would move across the street from these KGB operatives?).  Still, with some solid acting and incredible action, we are plunged into two seedy and dangerous worlds: international espionage and suburbia.

Phillip Jennings (Matthew Rhys) and his wife Elizabeth (Keri Russell) run a travel agency, or so it seems.  Within minutes we find out that they take on numerous identities, with the truth emerging quickly: they are KGB agents whose latest mission is to abduct a defecting general and return him to Mother Russia.  Unfortunately, complications involving another agent, Robert (Chase Coleman), who got stabbed, has them literally miss the boat.  Now with their captive Timoshev (David Vadim), they must decide what to do with him.

All this while keeping their tangled lives secret from their friends and especially their children, Paige (Holly Taylor) and Henry (Keidrich Sellati).  Meanwhile, two FBI agents, Amador (Maximiliano Hernandez) and Stan Beeman (Noah Emmerich) are now on the hunt for Timoshev, whom in flashbacks we discover was Elizabeth's mentor.

The Jennings' home lives are also getting them into trouble.  Paige attracts the unwanted attention of an older man at a shopping mall, displeasing Phillip (while his own fascination with cowboy boots and doing a bit of line dancing at the store embarrassing his daughter).  Philip is more at home with the kids and with America in general, while Elizabeth, even after fifteen years of undercover work, still struggles with both motherhood and the American way.  As it turns out, Stan happens to move across the streets from the Jenningses, and while Stan's wife Sandra (Susan Misner) and son Matthew (Danny Flaherty) are taken in by the neighbors, Stan's suspicions are raised when the Jennings' car fits the exact same description of the one which took Timoshev.

In the end, Philip is the one who will do everything to protect his family (taking delight in using his skills to take care of the guy making advances on his thirteen year old daughter), but is spared from killing Beeman when after Stan breaks in he finds nothing. 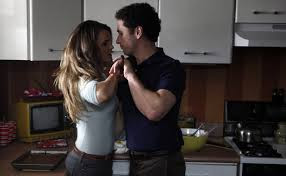 The Americans has an incredible mix of action and domestic dilemma. The opening throws you into this dangerous world the Jennings live in, and we get flashbacks that flesh out how Philip and Elizabeth became the way they are (and answers those questions as to how these Russians will always speak flawless American English).

The performances give us so much to work with.  I hold Rhys especially high up for praise: he has to maintain sounding like a typical American and speak in other voices when he plays other people (like a faux-FBI agent who has tricked an FBI office worker to be his mole).  That in itself is remarkable, but when you consider Rhys is Welsh, it is a sign of how good an actor he is that he can keep all these voices separate without jumbling things together.

Rhys also shows Philip to be close to his children.  He laughs with them and takes interest in what they do (when he is singing The Star-Spangled Banner at a school event with his unsuspecting son giving the scene an added layer of irony).  Philip is also someone who is wavering in his loyalties.  He doesn't want to defect for his own selfish reasons, but does consider it because he likes America (the good plumbing and cowboy boots) and thinks his children would be better off here.  There is a great mix of gentleness and ruthlessness in Rhys' performance: he can have big action scenes and then shift to father-daughter bonding smoothly.

Russell is his equal, playing various roles (seductress, mother, spy) and the only thing she is sure of is her devotion to The State.  Still, the rage she has against her former mentor who hurt her gets the better of her.  However, when Philip kills Timoshev, it shows how their relationship has evolved into something curious: not love but not deception either.

Granted, there are things that do seem far-fetched.  Having Stan move across the street is not only too similar to a Breaking Bad scenario (the DEA agent being Walt's brother-in-law) seems almost preposterous, and in what only be considered either uncharacteristic or plain idiotic inviting Stan to get car cables when Philip does not know whether or not Timoshev is still in the trunk of the car appears bizarre at best, downright stupid at worst.

Still, The Americans I think can build on this and create a good show where in a family, arguments between husbands and wives involve how to get rid of a defector and make it all look so rational.

Next Episode: The Clock
Posted by Rick at 4:43 PM