Holmes Shaken to the Core...

Sherlock Holmes is a most frustrating fellow.  He's sharp, intuitive, but also terribly insensitive towards others, at least when it comes to those pesky human connections.  Elementary has had as its running theme the concept of having Sherlock Holmes comprehend that he is not the center of the universe (even if he doesn't know that the Earth revolves around the Sun rather than vice-versa).  Tremors is the deepest exploration of this theme so far in the series.  Normally, I'm not a fan of flashback episodes, but Tremors handles the situation well and more importantly, gives us less a crime investigation than an exploration of Holmes' reluctant acceptance of people's value.  This I figure won't sit well with some Holmesians for whom the crime is everything, but I was extremely taken that Elementary does what other adaptations have either ignored or treaded lightly on: make The Great Detective human, with all the flaws accompanying it.

In an official police inquiry, Sherlock Holmes (Jonny Lee Miller) must explain his actions involving his consulting on two related cases.  Case One is that of Silas Cole (Zachary Booth), who appears at the Precinct waving a sword claiming to have killed his 'lady'.  Using archaic knighthood rules, Sherlock manages to help subdue Cole, though the Judge does not believe Holmes' testimony that Captain Gregson (Aidan Quinn) would say Holmes was 'brilliant' and some sort of guiding light that would lead them to the truth.  Words to that effect is Holmes' counter-argument.

As it stands, Prosecutor Marvel (Cassandra Walker) insists Holmes and his protégé Dr. Joan Watson (Lucy Liu) routinely break the law in their investigations.  Now in particular Holmes' antics have landed a police officer in the hospital.  She also wants Holmes to stick to the case in hand, but he insists the situation involving James Dylan (Danny Mastrogiorgio) is tied to the Cole murder case.  The murder case against Cole (who is suffering from delusions) is clear, but the motives for his killing his ex-girlfriend Rhada are not, especially since a.) she was shot prior to Cole's beheading of his 'lady', and b.) she was fighting cancer and apparently on the road to recovery.  To finance a specific line of treatment, she has a viatical life policy: in exchange for a stipend, someone else holds your life insurance policy.  Holmes is appalled at this line of business, and suspects Dylan, who owns the policy, had a hand in Radha's death (since if she lived he would lose his investment). 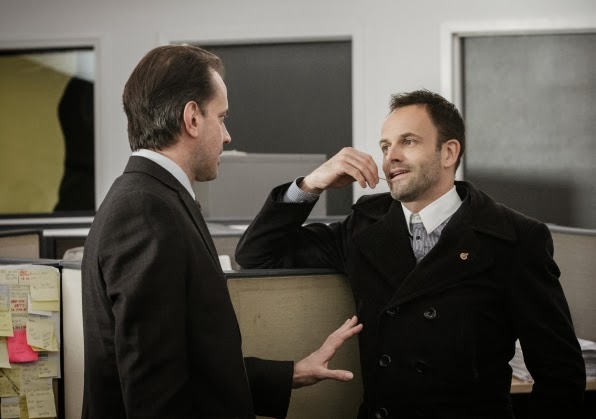 Holmes, through perhaps dubious methods, knows that Dylan is on parole, but his alibi (that he was at a bar the night of Radha's death), is a violation of his parole.  Holmes and Watson also discover that Radha had been dead for hours before Silas arrived, due to an overdose of potassium in her system.  With this new information, the duo turn to Dr. Phineas Hobbs (Jordan Lage).  Hobbs had been treating Radha with the experimental treatment, and Watson's medical knowledge leads her to conclude that his treatment was worse than the disease.  The medication was enlarging Radha's heart, and to stop the discovery Dr. Hobbs killed Radha, then conned the delusional Silas into taking the fall.

In the present, Watson (who is forced to back up Holmes' claims on how doors in New York City always appear unlocked whenever they need to go in somewhere) concludes the story on the stand.  After Hobbs' arrest Holmes is trying to get Detective Bell (Jon Michael Hill) into becoming a fencing student.  An enraged Dylan comes to the scene, telling Holmes that his boss and parole officer have discovered that he is a felon and a parole violator, thus sending him back to prison.  Dylan pulls out a gun, Bell gets in front of Holmes and is shot.  Throughout Tremors we know it is Bell who has been injured, and who may not be able to use his arm again, thereby ending Bell's career.

At the end of the inquest, the Judge recommends that Sherlock Holmes and Joan Watson no longer consult with the NYPD, and only the Commissioner can overrule the recommendation.  The Commissioner himself goes to Bell, asking for the detective's advise.  After constant requests and suggestions from Watson, Holmes finally goes to visit Bell.  The Commissioner, it seems, has opted to let Holmes and Watson stay on, with more supervision, and Holmes attempts in his way to make amends.  He even offers to bring Bell a specialist from Europe to help in his recovery, but Bell declines, saying he wants no favors from Sherlock Holmes.

Tremors has two pluses on its side.  First is the case itself, which ties together neatly both cases.  The actual Radha murder is not the greatest of mysteries (it would take some medical explanation for us to know things about potassium poisoning) but the way Liz Friedman's screenplay brings what would in any other story be a minor character/red herring (Dylan) into an antagonist that triggers (no pun intended) the crisis is well-down.  Granted, it isn't a surprise to see it is a.) Dylan who shoots, and b.) Bell who is shot, but I am not going to quibble with what I pretty much suspected (Bell would be the injured party in more ways than one).

Here is where the second aspect of Tremors comes into play.  Rather than this being about the crime itself, Tremors again is about the exploration of Sherlock Holmes as a person.   As much as he may not want to admit it, Sherlock Holmes has built a support system of people who at the very least, respect him and who may actually like him as a person.  Moreover, Holmes is being forced through circumstances to acknowledge that these people he's around have value apart from him.  Sherlock Holmes is a sharper person analytically than Joan or Marcus or Tobias/Thomas, but these people have been affected by Holmes' actions and now someone that he genuinely respects (Detective Bell) not only saved his life but may also lose his whole career over Holmes' actions. 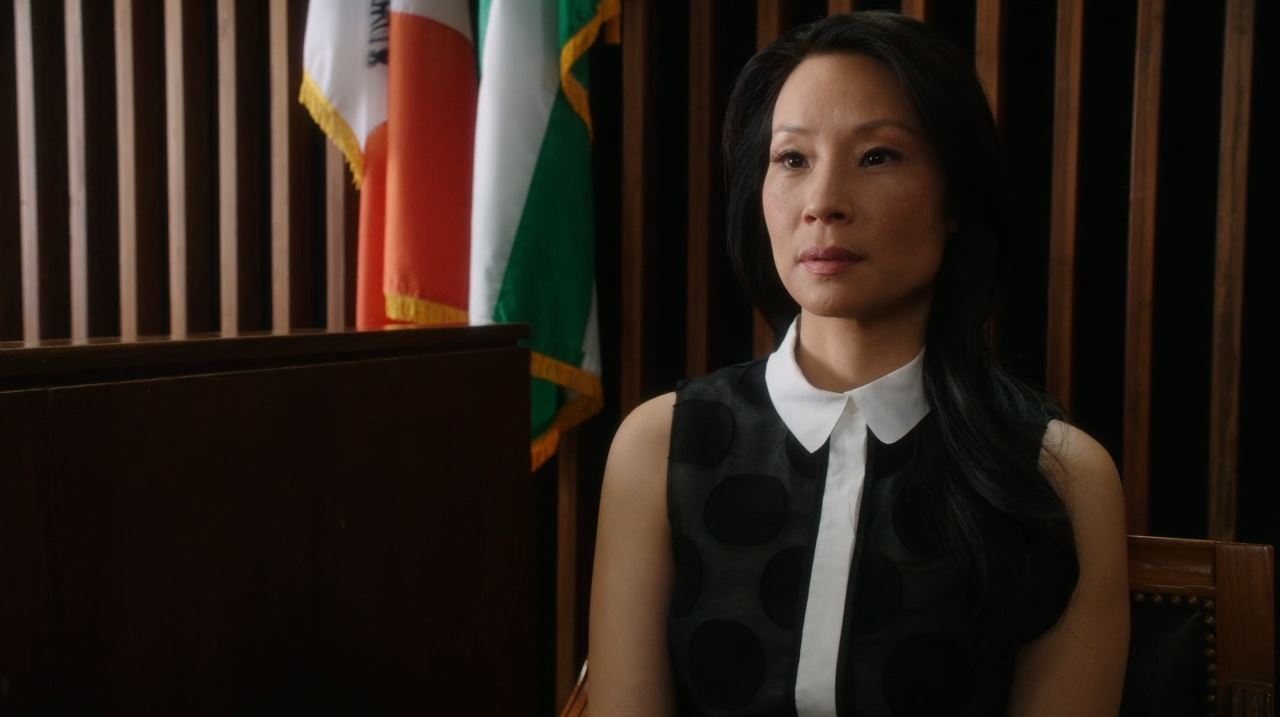 I thought that Sherlock Holmes egged Dylan on in their final confrontation, and throughout Tremors we see Holmes is almost thoroughly unapologetic for his methods and his treatment of people.  On the stand he is in turns evasive and arrogant, and Holmes at one point tells Watson that he is basically above the rules.  However, in his act of baking (which he says he does to relax) and in his attack on the dummy he uses to sharpen his fighting skills, we can see in Miller's performance that his Sherlock Holmes is struggling to come to terms with the end results of his own recklessness.  He uses the excuse that going to see Bell to express "banal bromides" or shedding tears for him would not help either of them in any way.  Watson tells him that sometimes banal bromides are enough.

In short, Tremors is about going to Sherlock Holmes' heart, which has been the primary course of investigation in Season Two of Elementary.  Holmes is coming to terms with having this unit of people, and his final scene with Hill show Miller to have truly come into his own as this variation of Sherlock Holmes: egocentric (his embellishment of what Gregson said at the station show Holmes has a very high opinion of himself), unwilling to admit error, but now incapable of denying that people are affected by what he does.  It isn't just Dylan who is affected (he is going up the river thanks inadvertently to Holmes) or even Watson (who is forced to corroborate his dubious testimony) and Gregson (who has had Holmes' back despite internal opposition), but now Bell, whom Holmes genuinely respects and who may have his career and life permanently altered because of Holmes' inability to control himself.

The baking, the attacking of the dummy, even the return of Holmes' pet turtle Clyde (always a welcome appearance) all show that Sherlock Holmes would rather do anything rather than admit he is human.

This isn't to leave out Liu's continuing greatness as a Watson for the ages.  She is fully aware of Holmes' struggle, and her performance shows that Watson knows when and how and how much and how far to push Holmes.  She tells him that what happened was not his fault, which is technically true: Bell did what was instinctive and he didn't mean to cause Bell a major injury.  Watson knows that all this is difficult for Holmes, but she also knows that if he doesn't fully accept the feelings of guilt he may have Holmes will not be truly at peace.  Seeing Hill's performance here also shows that Bell is a thoroughly capable detective on his own accord and someone who himself is conflicted: angry at Holmes but also wondering about those 'if only' questions that run through all officers minds.  "If only I had moved faster...", "If only I had let Holmes get shot...", "If only I had put my arm lower or higher..."

Tremors is a fitting title to the Elementary episode, for Sherlock Holmes has been more than rattled by this turn of events that even he did not foresee.  We now have several episodes to witness the aftershocks, and I for one am looking forward to see the rebuilding process.

Next Episode: Internal Audit
Posted by Rick at 12:01 AM