What happened to Matthew McConaughey?

I'm not referring to his physical transformation for Dallas Buyers Club (though seeing the man best known for baring his pecs at the sight of sunlight turn into a gaunt skeleton certainly is something to surprise those who know him best as the himbo du jour in bad romantic comedies).  I mean what happened to Matthew McConaughey, the guy who couldn't act his way out of a paper bag, the spiritual father to Channing Tatum?  I once put him among my Worst Actors List, someone who just flashed his body and smirked his way through any movie, where his distinct East Texan drawl made him sound dimwitted.
Now the 44-year-old is turning into an actual actor, one with some range where his body is not the selling point.  There was Mud, there was his small but memorable turn in The Wolf of Wall Street, and now Dallas Buyers Club.  What next: Matthew McConaughey as Shylock or Professor Henry Higgins?  Dallas Buyers Club certainly is his best performance and best role since he played what I have always thought was a variation of himself in Dazed and Confused, but while I would argue this isn't some shocking revelation of his artistic prowess (he IS playing a Texas redneck, not what I would call a stretch for the Austin native) McConaughey does show he is capable of more than just naked bongo playing.

Ron Woodroof (McConaughey) lives fast: screwing women left, right, center, heavy into drugs like cocaine and gambling, not ashamed of his immoral behavior and getting away with it.  He cares for nothing and no one but his own satisfaction, but he hasn't been looking very good.  He has a persistent cough and is rather thin.  One night, he collapses at home, and another time, the electric shock he receives sends him to the hospital.  Here, Drs. Sevard (Denis O'Hare) and Eve Saks (Jennifer Garner) give Woodroof the most shocking diagnosis: he has HIV.  Woodroof is infuriated: he ain't no homo, and in 1985 we all know that only 'fags' have HIV, which leads to AIDS.  Even worse for Woodroof, he is told that he has at the most 30 days.  Neither the diagnosis or the time frame does Woodroof accept.

On Day One, he decides the best thing to do is be with hookers and use coke.  On Day Seven, while reading on HIV, he finally and angrily accepts that indeed he does have HIV.  However, he also hears of new clinical trials for the AZT drug which shows some success.  He tries to bribe Saks but nothing doing.  However, Woodroof does have a few tricks up his sleeve: at a strip club he sees an orderly who was at the hospital and bribes him to bring him AZT.  His attempts at self-medication (with a generous helping of booze and cocaine) play havoc with his health.  Dr. Savard wants to know where he got the AZT, but Woodroof isn't talking.  However, here on Day 28 he meets Rayon (Jared Leto) a transgender individual who is going through the trials.  Woodroof wants nothing to do with this 'queer', but given that Rayon can outplay him at cards earns him Ron's grudging respect.

Once he gets out of the hospital, Ron learns of alternative treatments that he comes to realize are better than both AZT and the dosage the Food and Drug Administration has.  He wants those treatments and drugs, but they are not FDA approved.  "Screw the FDA.  I'm going to be DOA," he says.  After going to Mexico for drugs and treatment, he hits on a brilliant idea that came to him via news reports: he will import the non-approved but not illegal drugs and start a 'buyers club'.  In theory, members will pay nothing for the drugs, merely $400 a month for membership in this club.  He has few takers for his club at first, until he finds Rayon, who will serve as his entry into the gay world he so despises.  Rayon wants a cut of the profits, making them partners.  Woodroof isn't happy about this development, but he has no choice.

Now Woodroof, who has improved and outlived his initial diagnosis, begins a war with the FDA.  He has grown to despise AZT more than he has those 'fruits' he deals with, and despite himself Woodroof does slowly come to find that Rayon is not this degenerate, going so far as to make a former friend of his who disowned him after his diagnosis shake that 'queer's' hand through physical intimidation.  The FDA and Dr. Savard do their best to force the Dallas Buyers Club out of business, but Woodroof fights back.  When things are at their darkness, Rayon goes to his father, dressed as a man and answering to his birth name of Raymond, to get the money Woodroof needs.  Rayon, however, does succumb to AIDS while Woodroof is on a business trip to Japan to import other non-approved drugs.  A visibly hurt and pained Ron insists that Savard all but murdered Rayon with the AZT he gave Rayon.

Despite all his work, Ron Woodroof loses his case against the FDA, but thanks to him and his stealth and determination to save his own life, he saved others.  He lost the battle, but not the war.  On Day 2557 after he first learns of his diagnosis, we are told that Ronald Woodruff died of AIDS on September 12, 1992, seven years after he was diagnosed with HIV.

Dallas Buyers Club does not shy away from making Woodroof into a thoroughly unlikable person.  I thought he was scum in how he at one point stole Dr. Saks' medical prescription pad to bring in more drugs.  He also has little compassion or interest in being a charity: when someone comes to him with a mere $50, he coldly tells him he can come back once he has the other $350, then walks out of his makeshift office in a hotel and tells all those waiting that he will accept nothing less.  When he finds a rare woman among the clientele, one who has full-blown AIDS, Woodroof doesn't hesitate to take advantage to finally have sex with a woman without worry about infection. 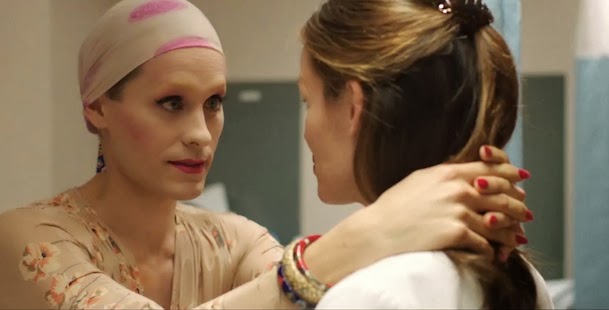 However, I have to give McConaughey credit in that we do the evolution of Ron Woodroof from hick bigot to hick who accepts that this scheme isn't just about making money or finding a way to save himself (yes, he's not only the President of the Dallas Buyers Club, but he's also a client, to quote an old tagline).  It's also about fighting the system (a typical Texan reaction to obnoxious government overreach) and saving lives.  When he finds that Rayon has not only gone to his father but has sold his own life insurance policy to bring in cash to allow Woodroof to buy more medication, Woodroof embraces Rayon, slowly, perhaps hesitantly, but compassionately and sincerely.  When later he learns of Rayon's death, there is a mixture of fury and pain in Ron that, given how homophobic he was, is astounding.

Yes, McConaughey gives an excellent performance, where for once his Austin drawl and swagger come to good use, but where he also gives us a steely determination and even an odd moment of vulnerability to go with it.  I also think Leto was excellent as Rayon (a fictional character who was a composite of people Woodroof worked with).  Again, I'm not a Leto fan (I wouldn't go to a Thirty Seconds to Mars concert of my own accord) but seeing his performance in DBC I saw a 'woman' who was him/herself highly troubled (he, unlike Woodroof, wouldn't go for clean living) but who also humanizes Woodroof and could get him to do things he didn't want to (for example, go inside the gay bars rather than just stay outside for fear of being around them).  The relationship between Leto's Rayon and McConaughey's Woodroof builds to one of actual respect, and both are excellent in their roles.

I also have to compliment Garner, who truly has never been better as she was in this film.  It's been a while since Garner showed she could act (Daredevil AND Elektra, anyone?) but her mixture of compassion for her friend Rayon and steely determination to do what is best for the patients and not the FDA were a remarkable thing to watch.

Craig Borten and Melisa Wallack's screenplay kept the story flowing quickly and I don't think it made the FDA or Dr. Savard intentionally evil.  The story does at least give Savard a justification in adopting Woodroof's cowboy behavior: a fear that without controlled studies there would be no way of knowing what worked and didn't.  Director Jean-Marc Vallee also has some beautiful moments in terms of both acting (the three leads) and visually.  In one scene, Woodroof with soft candlelight flickering in front of him asks God for a sign.  When he gets his sign, we know that those candles are not in front of an altar (I had already suspected as much).  He is 'praying' at the altar of a strip club, with the candles at the table having lit his pleas for divine intervention.

Dallas Buyers Club is a strong film that sometimes was a little heavy-handed with the rodeo symbolism (Woodroof falls similarly to how rodeo riders did in the opening), and I never understood what relationship Steve Zahn's cop had with Woodroof (were they related? friends?), and then there is the fact that Steve Zahn is in the movie.  If there was a suggestion of romance between Woodroof and Saks it fell flat.  However, minus those aspects Dallas Buyers Club is evidence that on occasion, Matthew McConaughey can act.  That in itself is a miracle of filmmaking.