Battle of the Year: A Review BATTLE OF THE YEAR

I am old enough to remember when it was called 'break dancing'.  My mother, a nurse, loved to regale me with stories of unfortunate kids who became paralyzed because they tried one wrong twist.  The fact that somehow spinning on my head never appealed to me never registered with Mumsy.  That being the case, when I watched Battle of the Year, which a character described as 'Fame with Crips and Bloods', I didn't think b-boying was anything other than Break Dancing with a different name.

I guess I am old now.  Not only do I not know or can tell the difference between the five boys of One Direction (apart from Harry, the 'cute' one with the big hair whom I think is rather unattractive, and Zayn, the only Muslim pop star I know of outside of Cat Stevens or Arab Idol), but until Battle of the Year, I never knew that b-boying was so big among the 'youth' that they would make a film so full of clichés and bad acting to show that it is capturing the zeitgeist of the Millennial Generation.  Battle of the Year is beyond bad.  It's stupid and even a little sad that it looks like they're trying but are unaware of how inept everyone in front and behind the camera are.

B-boying is no longer cool.  The U.S. is no longer dominating the sport.  Even worse, the Europeans and Koreans are now the b-boying kings (the French spend money subsidizing the 'art', which explains why the French kept failing to conquer the world).  This is a crisis in the mind of Dante (Laz Alonso), a hip-hip impresario.  His solution is to get his former b-boying running buddy Jason (Josh Holloway), now a disgraced drunk ex-basketball coach, to whip Dante's L.A. crew into shape.  Aiding Jason is "Franklyn with a Y" (Josh Peck), a nice Jewish boy who is obsessed with b-boying, down to repeatedly watching Planet B-Boy (the documentary that is the b-boying Bible...and happens to be the documentary made by Battle of the Year director Benson Lee.  Funny coincidence that...).  One look at Dante's crew leaves Jason in despair...they're good, but they are too much into themselves to be a team.

With that, he hits on a radical idea, one that might shake the very core of the b-boying world: get the best dancers from across the nation in open auditions and form a B-Boy Dream Team. Who would have thought of that?  Thus we get a whole crew together.  There is Lil' Adonis (Richard Maguire), an openly gay b-boyer, the homophobic Anis (Anis Cheurfa), and two dueling b-boyers, Do Knock (Jon "Do Knock" Cruz) and Rooster (scum of the Earth Chris Brown).  There are also some others: a Jewish b-boyer (disproving Franklyn with a Y's concept that Jewish men were rendered clutzes at circumcision), and a collection of stereotypes.  Jason is going to put them through boot camp: training for 12 hours a day, seven days a week, with each week one person eliminated until he has a team.  Franklyn with a Y describes this as Fame only with Bloods and Crips. 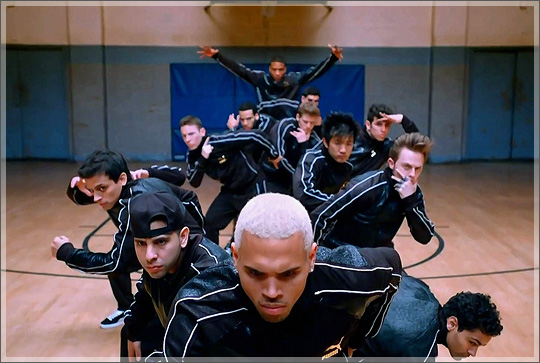 Most of the film takes up the inner workings of the dance crew: their arguments, their dancing, their begrudging respect for dance coordinator Stacy (Caity Lotz), and the rivalry between Rooster and Do Knock, former friends who had a fierce falling out over a girl both had slept with.  Eventually, after a lot of struggle, Jason gets what he wants: a group that works as a team, not a collection of divas, especially after in a trial run at a club against a Russian group makes a mockery of them and shows how disjointed the Americans are.  Eventually, they do manage to come together, with even Rooster and Do Knock reconciling.  However, tragedy strikes when Rooster is injured showing off a new dance step, making it impossible for him to go to Europe for the big Dance Contest (and I imagine, something about his probation making things difficult for him to leave the country).

Now, it's off to Paris for the final Battle of the Year, competing with the b-boy dominance of the South Koreans, headed by Fuel (who to me looked like a Korean drag queen).  We see the Americans, highly disliked after a bar fight caused by others painted them as 'ugly Americans'.  However, their skills, including a well-crafted dance about how each member was of a different background but were one, earns them respect, and a chance to dance against the South Koreans.  Even though they do not have victory, Jason teaches them that a.) they had won by coming so far from where they were, and b.) they would return.

I read that Battle of the Year had a budget of $40 million.  The question then is, 'why?'.  The cast is made up primarily of professional dancers who don't even bother to use character names (they might just as well played themselves, and while I think they did, they did it badly).  The 'professional' actors also embarrassed themselves.  Holloway looked as if he just wanted to get out of this, but to his credit he did try to use the character's alcoholism as character development.  However, Brin Hill and Chris Parker's screenplay never resolves the situation or uses it to really build up any sense of triumph.  Even worse, making his alcoholism come from the death of his wife and child is so horribly cliché.


Peck does himself no favors with his Hebrew schtick, and again we wonder why he would have played second-in-command to Holloway.  As for the others, it truly makes no difference who or what they are.  At one point one of the dancers named Bambino (Luis Rosado) leaves, but through the various eliminations and subplots of Battle of the Year we never really saw, remembered, or cared about Bambino, so his departure and subsequent return do not hit the emotional notes the film begs us to feel.  Further, minus the Rooster/Do Knock subplot, no other stories get any time.

For example, we go on and on about Lil' Adonis' sexuality (even though we never get a hint that he has any interest in anyone: no boyfriend, no desires for his fellow dancers) but how and why Anis turned from homophobe to homophile we know not, nor do we really care.

The screenplay does provide some moments of comedy, sometimes intended (Rooster, after the disastrous dance-off with the Russians, yells at them, "Call yourself the Dream Team?  More like Dream Girls!"), sometimes unintended (again, as Rooster scum of the Earth Brown says in the pre-audition interview "Breaking is my everything", making one wonder whether he is talking about his relationship with Rihanna). 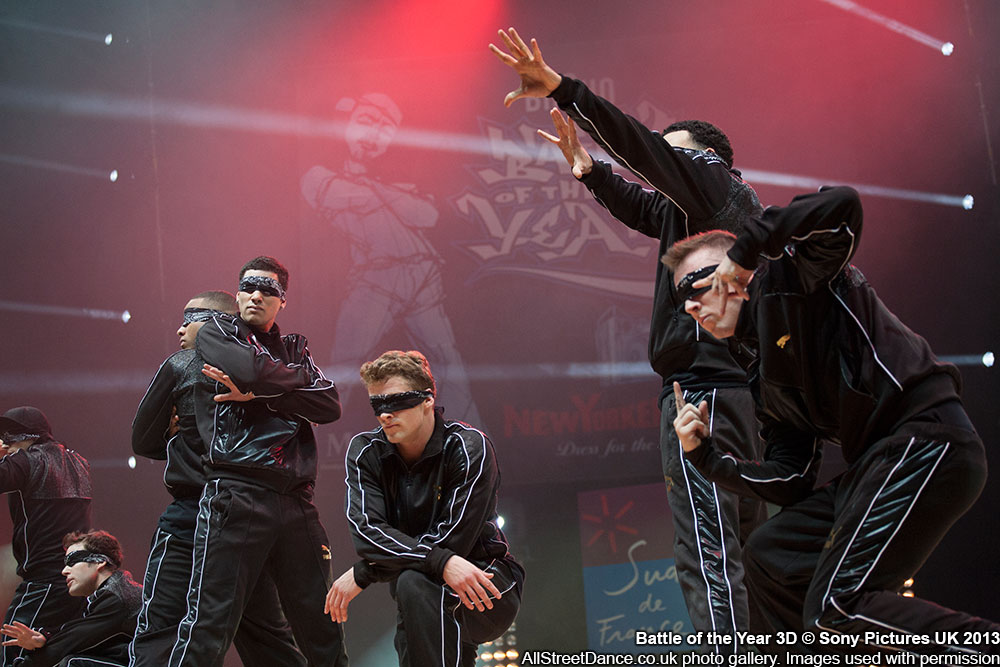 Even in the thing Battle of the Year (inexplicably released in 3-D) should excel in (the dance numbers), most of them are poorly shot and executed.  Only the final two numbers (one where the dancers are blindfolded to show how 'out of many, one' the U.S. team formed from Korean, Mexican, African, and Israeli Americans among others, and the battle between the U.S. and South Korea) are worth the time, but by this time it is simply too late to care.

Battle of the Year is gleefully, hilariously stupid.  It's as if all of them are playing at being hip-hop but despite their backgrounds in the field know nothing of the subject.  Fans of break-dancing, or b-boying, or whatever you want to call it, should stick to Planet B-Boy, unless they like laughing at how bad acting, directing, and writing can wreck their activities.