The Americans: The Clock Review

THE AMERICANS: THE CLOCK

Time Gives No Quarter To The Enemies of Socialism...

The Clock starts to slowly build on what we've seen in The Americans to create a tense Cold War thriller where the human costs of spying for the Soviet Union starts interfering more and more with the spies domestic lives.  We get to see the lengths our KGB family will go to for their mission (and poisoned umbrellas, which I always thought were works of fiction), and see that the FBI is also both so close and so far from finding that the enemy is literally just across the street.

With the election of that 'crazy man' Ronald Reagan to the Presidency, the Soviet Union is in a panic over what he wants to do: destroy 'the evil empire'.  Obviously, loyal Soviet spies Elizabeth Jennings (Keri Russell) and her slightly wavering husband Philip (Matthew Rhys) can't let that happen.  Over their unraised objections they are given the task of bugging Secretary of Defense Casper Weinberger's home.  Both know that such an operation is both dangerous and rushed, but they can't go and complain to anyone, so they do the best they can with the extremely short time they are given for their mission.

To get into Weinberger's home, they poison Grayson Johnson (Grantham Coleman) the college student son of the Weinbergers' maid Violet (Tonye Patano).  They tells Violet that all she has to do is steal a clock from Secretary Weinberger's office, give it to them, and then return it to his office.  In return, they will give Grayson the antidote that will save him.  She at first cannot do it, convinced her faith will see her through, but after a violent confrontation between Philip and her brother, she realizes she will lose her son and thus, does as told.

Meanwhile, FBI agent Stan Beeman (Noah Emmerich) has a mole of his own in the Soviet Embassy.  She is Nina (Annette Mahendru), whom they discover has been stealing caviar from the embassy in exchange for stereo equipment, which she in turn sends back home (I figure to sell for hard currency).  Nina can either be exposed or cooperate with the U.S., and she figures go for the lesser of two evils.

The bug is placed and while Grayson is saved, dealing with a civilian's mother makes Elizabeth question whether her own children will be safe should something happen to them.  Both of them are disgusted with the rushed nature of the job, but it does yield results.  The Soviets overhear a conversation between the British and Americans, where they learn for the first time about a missile defense shield the Americans are cooking up, what would eventually be the Strategic Defense Initiative but which would be called "Star Wars". 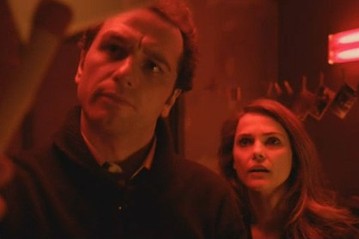 In truth, The Clock has a very simple premise, but it is expertly handled thanks to great writing by The Americans creator Joseph Weisberg and by some solid acting.  Of particular note is Rhys, who continues to excel in his multilayered performance.  Rhys doesn't just play Philip, but he also has to disguise himself as "Scott", a Swedish Intelligence Officer who seduces a member of Weinberger's staff to photograph the Secretary's office.  He also has to disguise his appearance whenever he interacts with Violet, so if one thinks on it Rhys has to play a variety of roles within the episode (and the series itself).  Not once does Rhys falter in any of his performances, making each character believable.

Russell is equally strong as Elizabeth, who is devoted to the cause but also sees that her superiors ask for too much from them in a short period of time.  She shows compassion of sorts to Grayson, which in turn have her think of her children.  Elizabeth has not been one for mothering (Philip is the more compassionate of the Jennings'), but now we see a small crack in her strong veneer.  At the end of The Clock, we see that Elizabeth is starting to try to bond with her daughter, and that Elizabeth is like Violet, a worried parent who wants to get close to her child and fears for their lives.

We see this also reflected in how she sees Violet, who is caught up in intrigue not of her own making.  Patano is great as Violet, not going too overboard with the fierceness of her faith but also a woman who knows that working for these two is morally wrong.  The concern she has for her only child is terrifying and heartbreaking, so when we find that he will live we do get an emotional release, but also know she has gone through a terrible ordeal.  Personally, I hope she returns for another go-round.

The Clock is also building up future stories with Nina getting tripped up by her actions, and with the Soviets stunned at the SDI they have learned about.

The Americans and The Clock are both good, solid episodes, and promise great things which hopefully the series will deliver on.   In this case, it looks like these are spies worthy of investigating.