An Inside Look at Holmes' Interior

Internal Audit left me wondering whether Elementary has been given the credit it deserves for being both a good Sherlock Holmes adaptation and a good show on its own merits apart from the Conan Doyle roots.  This episode managed to throw nods to the Canon that even the most cursory Holmesians would recognize while putting them in totally new context.  Internal Audit, coming right after Tremors, does the running theme of looking into how Sherlock Holmes has become more human proud.  The case itself is also quite solid, working on those multiple levels Elementary is specializing in, and we still get in between the actual murder investigation those personal explorations of the characters.  Internal Audit, however, doesn't just go for Holmes' internal audit, but we also get into Joan Watson and Detective Bell, tying things so well.

Donald Houser (Thomas Ryan), a Bernie Madoff-type, has been murdered at his home.  It's unfortunate too, given that we see Houser was about to commit suicide when someone beat him to it. The person who discovered Houser, his personal chef Chloe (Heather Burns), immediately recognizes Joan (Lucy Liu) and vice-versa.  Houser's crimes were about to be exposed by investigative journalist Rosalie Nunez, but oddly, now she has turned up dead too.

We turn to the last person to see Houser alive.  That is Jacob Weiss (Richard Masur), the head of the World Reparations Council, which is involved in restitution for Holocaust victims and their descendants (I imagine locating stolen finances and art).  Weiss has an alibi but unlike others, the WRC has not been swindled, since Houser worked for them for free.  We also learn how Chloe and Joan know each other: Chloe, once a highly successful restaurateur, was one of Joan's first clients.  She however, has been sober for several years and with a child.  Chloe fears exposure of her past will both discredit her to her clientele and put her child at risk of being taken from her.  Joan promises confidentiality and that Sherlock can be trusted. 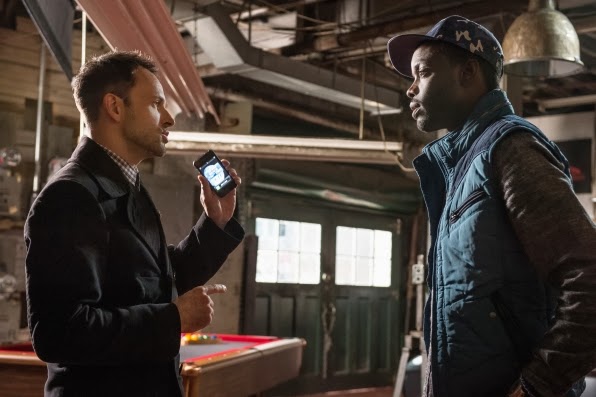 While Holmes continues the investigation, he has other matters creeping into his life.  Alfonso (Ato Esandoh), Sherlock's sponsor, now throws Holmes a giant curveball.  He thinks Holmes is ready to be a sponsor himself, and presents Randy (Stephen Tyrone Williams).  Holmes is highly ambivalent to take Randy on.  Watson now fixates on videos to see if she can find Nunez's killer whom they believe was inadvertently caught on tape by skateboarders recording themselves.  They get lucky: Nelson Maddox (Lucas Hall) fits the description Holmes deduces.  Complication: Nelson is Chloe's ex from their using days.

Holmes wants Chloe to go and identify Nelson, even if it means exposing her past and putting her child at risk of being taken in a custody fight.  He and Watson argue about this, she insisting there has to be another way.  To clear his head, he goes to Alfonso's, finally breaking into the car with the security system Alfonso has had Sherlock try to crack.  After a heart-to-heart Holmes jumps back into the case.

The search for Maddox leads them to an art gallery run by Fabiana (Rebecca Dayan).  This 'Neo-Deconceptualist' gallery appears legit, but we find that a.) it's a money-laundering front, and b.) Maddox is dead in the dumpster outside.  We discover that Maddox has been a silent partner in the front, as well as who killed Maddox (who had been hired to kill Nunez and Houser because both knew too much), and it involved stealing money from Holocaust victims.

It is a bane of Elementary to not have true follow-through on many characters.  While it is good to see Alfonso back, given the show's track record I don't know whether the idea that Sherlock Holmes being a sponsor will get any traction.  I'm after all still waiting for Ms. Hudson to return.  That should be the best case against Elementary by the Sherlockians (even if their own show has flaws, but that's for another time).  That, however, while a big point, doesn't cloud the good work Internal Audit does with regards to the characters and plot.

I highly enjoyed the word "Thief" in blood on the wall.  This is obviously a reference to "Rache" on the wall in A Study in Scarlet, and this in a side note is a fascinating look into how Elementary and Sherlock handle this iconic Canon scene.  In A Study in Pink, the word "Rache" was written on the wall (just like in Canon) but the reasoning was reversed; in the novel, the police thought it was an attempt to write "Rachel" but Holmes points them in the right direction: it is rache, the German word for 'revenge'.  A Study in Pink has it the other way round: the police think it is the German word for 'revenge' but Holmes points them in the right direction: it is "Rachel" interrupted, going so far as to ridicule the idea that someone would think it was rache.  I still don't know why those who love the Canon never object to this twisting of A Study in Scarlet.  In any case, Elementary moves away from the whole 'rache'/Rachel situation by substituting another word but keeping the writing on the wall.

I think Bob Goodman's take on this was a smart choice, honoring the Canon but making things fit the particular story.  We also get good moments of comedy in the screenplay.  There's Holmes' dismissive attitude of the youth having this narcissistic need to post all their trivial exploits online.  The best moments involve Randy (whom he calls Randall).  When the recovering addict says, "I'm Randy", a genuinely perplexed Sherlock asks if that was his name or his state.  Randy is now confused, but Holmes clears things up: he is asking the youth if he is horny because Sherlock (in Sherlock's view) has an effect on people.  Here, through both the screenplay and Miller's performance, see that Sherlock is still someone with a high view of himself but that these British puns can be used to great effect.  It is comic without being ridiculous.

Moreover, Internal Audit shows Sherlock Holmes to be in deep internal conflict.  He admits that the rational side to him won't admit error in regards to what happened in Tremors, but he also knows that that thing called conscious is eating at him.  We also see that what would have been easy for Holmes to do (expose Chloe's secret to apprehend the killer) is now harder, and not just because Chloe could lose her child.  Watson, the one person who is able to stand up to Holmes, insists that revealing Chloe is wrong on so many levels.  She points out what he already knows: he won't admit to feelings.

As with Tremors, we still see the repercussions of Holmes' actions.  Bell makes a smaller appearance, but now we see through Hill's performance that Bell is trying to move forward despite the difficulties he faces.  It's a credit to Hill as an actor that even though he has few scenes he brings the best in them.  We also see subtle shadings that Watson is slowly adopting Holmes' methods.  We see this in the scene where Watson is observing the video of the skateboarders: she is watching multiple screens simultaneously (which is how we first are introduced to Sherlock Holmes in the pilot).  It's subtle, but effective.

Internal Audit showcases great performances by Miller, Liu, and Bell.  It has a strong story where the twists and turns make sense, a murder plot that holds.  I doubt we will see much of Sherlock Holmes as a sponsor (which would lead to fascinating stories or subplots) but other than that I think Elementary as a whole and Internal Audit specifically are doing Sherlock Holmes proud.

Next Episode: The Diabolical Kind
Posted by Rick at 12:01 AM