Woman In Gold: A Review 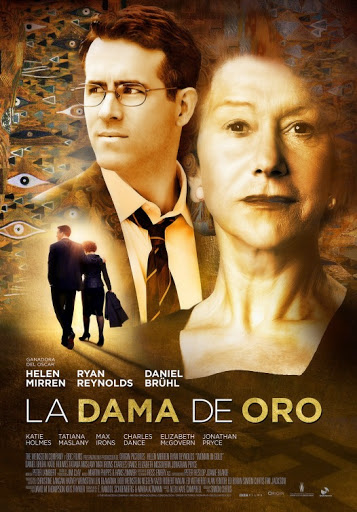 There may be a temptation to look on Woman in Gold and think two things.  One: it is early Oscar-bait.  Two: why would you cast as a nice Jewish boy someone like Ryan Reynolds, who is as goy as they come?  Unlike the Gustav Klimt masterwork, Woman in Gold has flaws.  However, I think some of its detractors have been excessively harsh on the film, which is respectable, tells an interesting story, is generally well-acted, and hits all the right notes (like a master cellist).

The film jumps between present-day Los Angeles and pre-Anschluss Vienna.  In the present-day, émigré Maria Altmann (Helen Mirren) asks a family friend's son, Randal Schoenberg (Ryan Reynolds) for legal advise. Randy, a lawyer whose efforts at starting his own firm flopped, is hardly interested either in helping Mrs. Altmann or in his own Jewish heritage.  He isn't even that interested in the fact that his grandfather is the legendary composer Arnold Schoenberg, seeing this detail as more a burden than a source of pride.

The unflappable Maria will not be dissuaded in getting Randy to help her in her situation.  She wishes to reclaim paintings stolen by the Nazis when they took over Austria.  In particular, she want her aunt's portrait.  This, however, is not just any old oil painting.  It is Portrait of Adele Bloch-Bauer I by none other than Gustav Klimt.  The painting is legendary, and the current Austrian government, considers Woman in Gold as they call it, to be legally theirs.  Mrs. Altmann, however, does not see it that way.

Therefore, she, with a reluctant Randy by her side, does what she swore never to do: return to Vienna, her childhood home, to push for restitution of her family's stolen property.  We get glimpses of her life and that of her extended family before the Nazis marched in.  We learn how the younger Maria (Tatiana Maslany) lived a happy life, and married an opera singer, Fritz (Max Irons).  Things, while not perfect, were good, but despite her uncle's warning to flee Austria before it was too late, the family chose to remain in their homeland.

Bad decision, as they are now targeted for being Jewish.  The Nazis come and take anything they want, even her father's beloved cello.   In a desperate bid for freedom, Fritz and Maria give their Nazi minder the slip, though it means leaving her mother and ill father.  Through a combination of luck and helpful friends, Fritz and Maria make it to America, where they learn of her father's death.

The Austrian government will not budge, and are determined to keep the painting in Vienna.  Altmann begins tiring of all the fighting she has to do, including going to the United States Supreme Court to argue that she can take the Austrian government to American court.  Eventually, she fires Randy (despite having grown close), and he pursues the case on his own, every step of the way aided by a noble Austrian journalist, Hubertus Czernin (Daniel Bruhl).  In the end, to the surprise of everyone, the three-member arbitration board rules in Altmann's favor, and she takes her family's collection, including Portrait of Adele Bloch-Bauer I, to America, with the proviso that it be displayed publicly for all time.

Respectable is the best term for Woman in Gold.  It is a fascinating tale, and on the whole I think one told pretty well.  Helen Mirren, my own "Woman in Gold" hits every note perfectly as the sometimes upbeat, sometimes snippy Maria.  I've seen and heard comparisons to Philomena, but I think there's a marked difference between both the characters and the films.  Philomena Lee is a rustic Irish lass, while Maria Altmann is a more sophisticated and cultured Austrian émigré.  Moreover, while both were touched with terrible tragedy, the fact is that Philomena had to make peace with a lack of closure while Maria got what she wanted.

However, Mirren was a delight to watch as she did her usual great job.  I also compliment Maslaney, best known for the cult series Orphan Black.  She not only handled the growing terror of the Nazi thugs well, but had to do it sometimes with speaking German.  (As a side note, Mirren's Austrian accent was excellent).  It's almost a shame we didn't get the young Maria story because her flashback scenes were sometimes better than the present-day scenes.

In fact, perhaps it would be good to revisit Woman in Gold to focus squarely on Maria's life before her flight to freedom.  This would give someone like Max Irons a chance to have a greater role, though I think in his limited time he left a positive impression.

Where Woman in Gold is weak is when it comes to Reynolds.  Again, I am one who thinks Reynolds is a good actor when given both a good script and good directing.  He didn't have that here.  He came across as a bit lost, not aware at times of how things worked, which is strange given he is suppose to be a lawyer.  Granted, I've met dumb lawyers, but here, Schoenberg isn't so much dumb as uncomfortable, hesitant, what I would call a bit of a nebbish.  Ever more curious, we're suppose to think that Schoenberg has a growth of conscience about both the injustice done to Maria and to his own Jewish identity.  This is suppose to culminate when he goes with Maria to the Holocaust memorial in Vienna, but as played by Reynolds and directed by Simon Curtis, it almost looks like he just suffered with some indigestion from strudel.

I'll say this: Reynolds gave it a good go, and while not terrible, it isn't as good as he could be.  And again, why did they pick this Canadian Gentile to play Schoenberg?

As a side note, it might have been nice to a.) have had some actual Schoenberg music play apart from a brief moment near the end where Randy attends a Schoenberg concert in Vienna, and b.) given Katie Holmes (not the greatest actress in the world) something to actually do apart from being Mrs. Schoenberg.

Still, despite its flaws Woman in Gold is...respectable.  Efficiently made, it might have been better, but on the whole, I enjoyed its tale of justice delayed but not denied.