I will not say that Amy Schumer is this generation's Carol Burnett. Bill Hader, on the other hand, is another matter.  I'm an unabashed Hader fan, having been convinced by The Skeleton Twins and Trainwreck that he is one of America's best actors, comic and/or dramatic.  I think Trainwreck is meant as a showcase for Schumer, which is great (since she wrote it).  Like just about every Judd Apatow film, Trainwreck suffers from excess length and some jokes that for me were hit-and-miss.  However, the story was clever enough and engaging enough to keep it all rolling pretty well.

It also was funny, to where I was laughing almost despite myself.

Amy (Schumer), has gone from one-night stand to one-night stand, boozing and pot-smoking her way through life, convinced that she will never settle down, though she has something of a continuing relationship with gym rat Steven (John Cena).  Her sister, Kim (Brie Larson) has married and has a stepson, Allister (Evan Brinkman), who calls her 'Mom'.  Their father, Gordon (Colin Quinn), who is suffering from MS, has been put in a nursing home, a source of conflict between Amy and Kim (Kim seeking a cheaper place for the father they struggle to love, Amy determined to keep him in the nice one they have him in).

Amy works for S'Nuff Magazine, a low-rent Men's Health/Maxim blend.  At a staff meeting, editor Dianna (Tilda Swinton), assigns Amy a profile of a sports medicine doctor working on a revolutionary surgical procedure.  Amy detests sports and thinks both that sports and their fans are beneath her (something she shares apparently with lauded writer John Green).  Although this profile could elevate her position at the magazine, reluctantly she goes to see Dr. Aaron Conners (Bill Hader).  Aaron is non thrilled to see she has no interest or knowledge about sports, but gamely goes ahead with the profile.  As part of the profile, and having just broken up with Steven, Amy resorts to form and sleeps with Aaron (the booze both consumed helps). 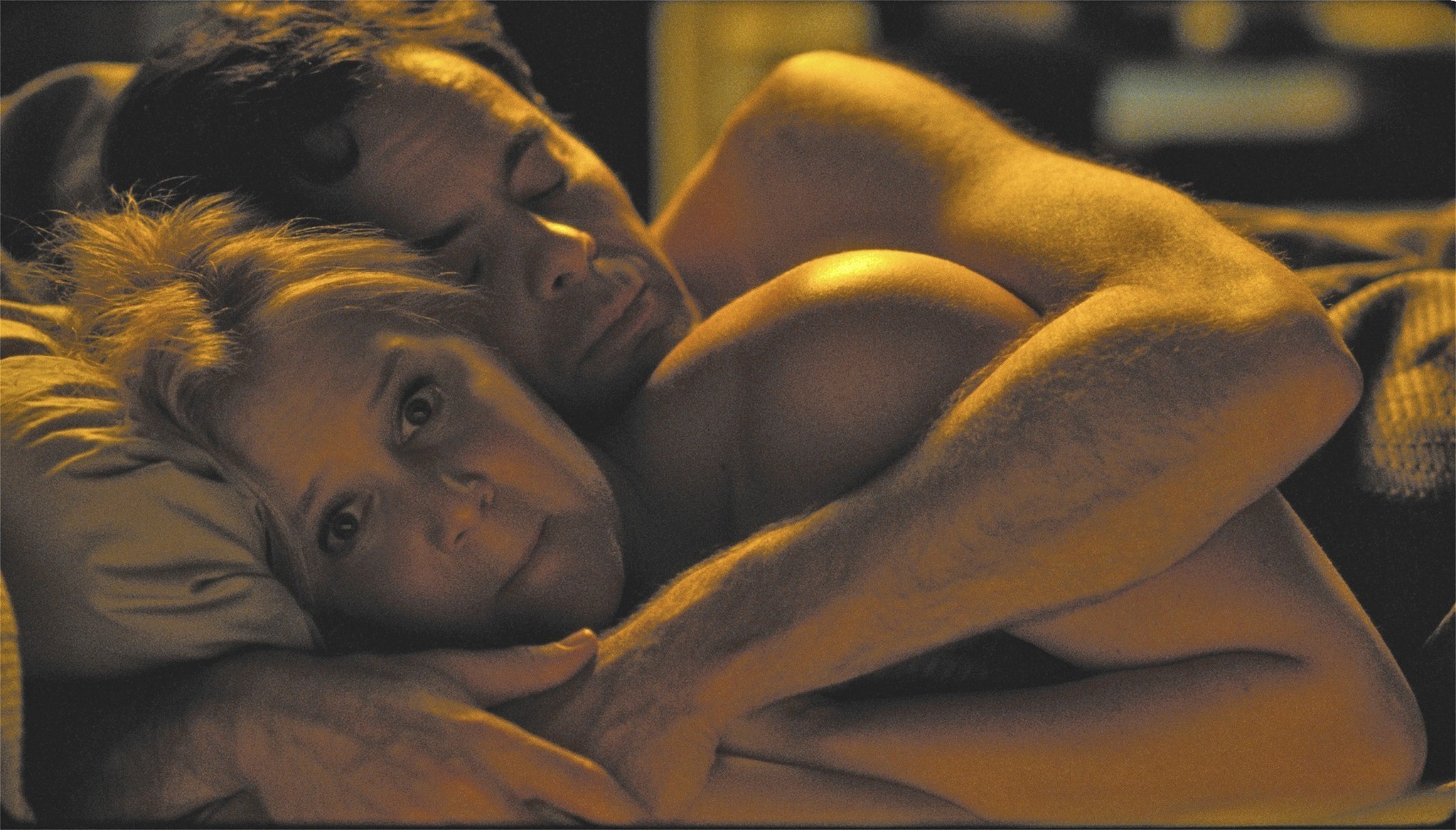 Encouraged by Dr. Conners' friend LeBron James (playing himself), Aaron finds he wants Amy in a relationship, shocking Amy.  However, despite herself, Amy soon starts finding the joys in monogamy (down to a romantic montage).  Her father, cranky Nuw Yawker that he is, is slightly happy for her, and her sister even more so.  However, Amy's own hang-ups about herself do everything to sabotage the relationship, and she takes a call at a special ceremony honoring Aaron for his work with Doctors Without Borders (which was a.) important to him and b.) she referred to as 'Doctors With Borders').  Her own problems push Aaron away.

As a result, Aaron is too distraught and sleep-deprived (having stayed up all night listening to her) to perform surgery for Amar'e Stoudemire and really playing with Amy's own issues (Gordon's death not helping either with her relationship with both Aaron or Kim).  It also kills her work at S'Nuff (her attempts at a one-night stand with intern Donald (Ezra Miller), whom we find out isn't 21 but 16, don't help there either). As Dianna helpfully points out, she could be arrested for assault (Donald being into a little S&M) or fool around with a minor, but not both.

Eventually though, Amy pulls her life together: she quits boozing and pot-smoking, rewrites the Conners profile S'Nuff rejected and takes it to Vanity Fair (where it's accepted), reconciles with Kim and most importantly, goes to Aaron and shows she does love him (with a little help from the New York Knicks Dancers), all to the rhythm of his favorite song, Billy Joel's Uptown Girl.

This mix of sincere and raunchy works so well, and both Schumer's script and Apatow's direction keep this mostly balanced.  The film is filled with hilarious moments from just about everyone.  Quinn has a great bit where he attempts to convince his daughters the nursing home is a hedonistic pleasure palace.  "After 7, after dinner, this turns into Caligula", he snaps.  John Cena, by no means an actual actor, is surprisingly hilarious as the essentially gay boyfriend who apparently doesn't realize he's probably gay.

When Amy asks the meathead to 'talk dirty', he first attempts to introduce gym jargon into the talk, but then manages to cum when he tells her that when he saw her for the first time, from the back she looked like a man.  At the theater where they were watching The Dogwalker (with cameos by Daniel Radcliffe and Marisa Tomei as the actors in the faux-film), Steven starts arguing with someone who asks them to keep quiet.  Calling him an a-hole, Steven replies, "You know what I do to a-holes?  I lick them", but Cena delivers it so straight (no pun intended) that it's even funnier.

The cameos by other sports stars are equally good (except for Tony Romo, but that's because he just sucks in general).  LeBron James has a lot of fun offering his friend Aaron advise on romance.  Like Cena, his straightforward quoting of Kanye West's Golddigger as a warning about using protection is hilarious (as is his assertion that Aaron has to come watch Downton Abbey with him because as he puts it, James doesn't want to be left out of the locker room conversation. An extended scene where James offers more advise to Aaron which segways into a virtual commercial for Cleveland and Ohio as well as commentary on his recent Miami-Cleveland return had me almost on the floor. Any man who can give the sexual advise "No Penetration Without Representation" and deliver it straight gets major props from me.

It is also amusing, if not downright shocking, to see Tilda Swinton a.) play things for laughs, b.) be so good at it, and c.) look like an attractive woman.  She and the rest of the S'Nuff Magazine crew (and as a side note, it is good to see Korean-American actor Randall Park, most recently of The Interview, play a character named Bryson), although with small parts, did make things funny.  Quinn too is quite funny in his cynicism, though he is his usual Colin Quinn persona.  I was amazed to see 100-year-old (!) Norman Lloyd in this film, playing Gordon's nursing home frenemy Norman.

Bless Norman Lloyd...and get him either an Honorary Oscar or Kennedy Center Honor.

Larson is there to provide the gravitas to the film, and she does so in a strong way that Trainwreck could have been reworked as a drama and Larson would easily be at home there.  However, I'm glad she is in a comedy, and a funny one at that.

At the heart of Trainwreck are Hader and Schumer.  I'm an unabashed Bill Hader fan, and he brings a naturalism and sweetness to Aaron, a nice guy who while not having the sexual experiences of Amy (he admits to having been with only three women, compared to Amy who probably has had three women in the past six months, let alone countless men) really has fallen for this highly flawed woman.  I was so happy to see a romantic comedy where the nice guy is realistic and who is sensible (he does leave when it becomes clear Amy won't change).

As for Schumer, this is my first experience with her, never having seen Inside Amy Schumer.  I can't say she's a genuine actress (if maybe she and Larson had changed parts, I might get a better sense of what Schumer can do).  Still, in her narcissism, in her self-destructiveness, and in her acceptance that maybe she was worthy of love, Schumer did exceptionally well.  Her scene at Gordon's funeral was real, amusing, and sad all at once.

Now, as I stated, there are one or two issues with Trainwreck.  First is length.   There were parts that could have been left on the cutting room floor (a scene at Kim's baby shower where the women have to describe the most shocking thing they did for example, especially since a punchline was missed because we were laughing at what Schumer had said and I couldn't hear what the next person said). Same goes for The Dogwalker making repeat appearances.  The first time it was amusing, the second, not so much.

I guess if you hire Radcliffe and Tomei, might as well get your money's worth.

Some of the jokes I confess to not getting, but I put that on being a somewhat sheltered person.  The Donald subplot was a bit odd: how did he go from being 21 to 16 without anyone knowing it?  Maybe that too could have been eliminated.

Apart from that it's clear Trainwreck is anything but.  It's a funny film, perhaps more risqué and downright dirty than I go for.  However, with really funny moments and strong performances by everyone (especially Hader, who will be overlooked for this like he was for The Skeleton Twins), Trainwreck knows what it is, plays with its own conventions, and has you laughing (sometimes despite your best efforts not to).