The Interview: A Review 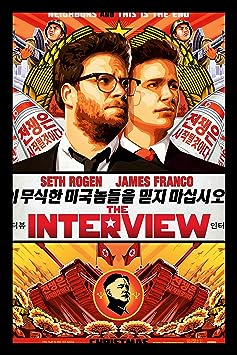 The Interview is terrible.

There's just no getting around that.  Separate from the scandal and misery the film caused Sony in terms of leaked e-mails and hacking from a terrorist regime so paranoid and devoid of humor, The Interview as a film is unfunny, insulting to the audience, crass, immature, and just terrible. Terrible, Terrible, Terrible.

In other words, it's a Seth Rogen production.

Dave Skylark (James Franco) is the host of nightly talk-show Skylark Tonight, which while popular is not respected, which goes double for Skylark himself.  Dave is a vapid moron who is so witless that his only points of references to just about anything is Lord of the Rings (the movies, not the books, since Skylark is the type of dimwit who thinks To Kill A Mockingbird is a hunting manual).  His best friend/producer Aaron Rapaport (Rogen) pretty much goes along with everything Skylark does, though at a party to celebrate their 1,000th episode he sees a former friend who sneers at Skylark Tonight and everything to do with it (his friend works at 60 Minutes).  This needles Rapaport, but it doesn't bother Skylark since, in his words, "They hate us cause they ain't us".

These are the types of inane oddities Skylark dishes out often.

Skylark, however, gets surprising news.  He comes upon a profile of North Korean dictator Kim Jong-un, and discovers that the fat pig of a despot is a fan of all things, Skylark Tonight.  More shocking than North Korean nuclear missiles coming at us, Rapaport manages to negotiate a live interview with the reclusive leader of the Hermit Kingdom.  This news stuns the entire universe: an idiot like Dave Skylark gets a sit-down with Kim Jung-un?!  Even Bill Maher in a cameo mocks this, suggesting Dave is such a moron that when Skylark gets to Pyongyang (which Dave can't pronounce), he'll end up thinking he's interviewing the guy from Gangnam Style.

Dave and Aaron, for their part, want a little street cred, but being Dave and Aaron, go on a drug-and-alcohol fueled bender.   Enter Agent Lacey (Lizzy Caplan), the sexy CIA agent who gives these two an assignment: take out Kim Jung-un.  Dave and Aaron, being Dave and Aaron, at first don't get what she means by 'take him out' until it's made perfectly clear she means assassinate.  With some training in applying a specific poison, the dysfunctional duo go off to the Socialist Paradise (or what the United States will look like in the second term of President Bernie Sanders).

At last they meet Dave's number one fan, Kim Jung-un (Randall Park).  Dave is easily smitten and taken in by all the greatness of the North Korean paradise and ends up thinking Kim is a really cool guy.  He's so taken with his little buddy, who shoots hoops with him, shows him his tank (complete with Katy Perry blasting in the tank's sound system) and the hot chicks he decides Kim is just a misunderstood player like himself.  Kim just suffers from a bad rep, and thus, Dave won't kill him.

Aaron is appalled at this, and with a little help from the sexy North Korean official Sook (Diana Bang), decides they will do the deed during the scripted interview.

I'd like to point out that Skylark, with a very reluctant Rapaport, had agreed to ask only the questions Kim supplied them with.  Like everything in North Korea, the whole thing is staged. It's only when Skylark a.) sees Kim lose it and drunkenly plot nuclear war, and b.) discovers the grocery stores are fake and filled with fake food, does he finally agree to go along with this caper.  In the end, while they bungle the plans they do end up killing Kim and return to a pleased America...complete with puppy.


Obviously, a satire on Kim Jung-un is possible, and certainly an intelligent one.  The Interview is not such a satire.  It tries too hard in so many ways to be funny when it ends up cringe-inducing.  Dave Sterling's screenplay (based on a story by Sterling and co-directors Rogen and Evan Goldberg) has nothing in it that is funny apart from the first scene, where Eminem in a cameo 'comes out' as gay.

Even here, though, we can see why The Interview is so horrendous as a film.  Dave Skylark as portrayed by Franco and as created by Rogen/Goldberg is such a complete and total moron that he can't come up with any follow-up questions without Aaron speaking into his ear.  Throughout The Interview the yin and yang of Franco & Rogen's characters never appears realistic.  That 'struggle' Rapaport has about being a 'real news producer' are thrown out there, but never explored (unlike Rogen's anus, which was the subject of a particularly ugly sight gag).  Skylark, for his part, is such a total dimwit that he cannot identify a tiger, referring to it as a 'big striped dog'.  His character is shown as such a moron again and again to where one wonders whether he is not actually stupid but downright insane.

Again and again Rogen & Company are obsessed with this kind of juvenile humor that those Freaks and Geeks would have left in high school.

At this point, the question as to why Seth Rogen has a career in film should be brought up, because apart from a few films (maybe Superbad, probably This Is the End, maybe Neighbors...though I haven't seen that one yet), Rogen has done the same shtick again and again and it just isn't funny.  Not that it was then, but why are people still paying money to see this over and over again?

More surprising to me is how violent The Interview gets at the end, particularly with Rogen's character.  It's played for laughs, but I think the actual reaction one has is revulsion , not revelry.

This takes away from Park's Kim Jung-un, who comes across almost sympathetic: more needy and spoiled than bonkers or even evil.  As played by Park, Kim is just a messed-up kid trying hard to live up to Daddy Dear Leader's expectations.  His performance (and Eminem's cameo) are the only good things in the film.

IF the screenplay had bothered to make Skylark slightly more intelligent than the gibberish-spouting loon/nitwit he was, or if it had bothered to make Aaron the more sensible of the two (well, it actually did try, and failed spectacularly in those efforts), or even attempt to make fun of the situations and characters rather than rely on "I have a hard on, let's look at it" style of humor, The Interview might have been worth something.

It's a sad commentary that the North Koreans went into fits over this dribble.  Obviously, they are sheltered and humorless.  If they had any sense, they would have done what the rest of us should have done: ignored it and watch it die a quick death.  Instead, it sent its Guardians of Peace after The Interview and Sony, giving this horror much more publicity than it deserved.

Though, in fairness, how else would we have learned about Angelina Jolie being a 'talentless spoiled brat', or about "Johnny Madrid" aka Tom Hanks, or how the industry leading the charge against a 'war on women' goes out of its way to pay the broads less than the bros.

The fact that the G.O.P. targeted The Interview is a funnier pun than anything the film itself came up with.