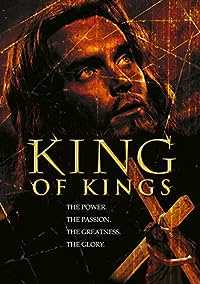 I notice that almost all the films that depict Christ are so wrapped up in portraying the Divinity of Christ that they forget the Humanity of Christ.  That is the great mystery of Jesus the Christ: how He can be fully Man and fully God simultaneously.  This I think is called the Hypostatic Union.  Out of all the films about Christ, I think only the television movie Jesus, with Jeremy Sisto in the lead role, bothered to ever show Jesus as someone who had any human emotions (that Jesus laughed, danced, joked with his friends).   I am someone who is growing to place Christ as my God, the whole ruler of my life.  However, I believe Christ has given me some abilities to think and review, and King of Kings, a film version of the Life of Christ, is slow, sad, solemn, serious, stodgy, and stilted.

For all intents and purposes, despite its epic nature and long running time, Christ is almost irrelevant to King of Kings.  And that's perhaps the least of its problems.

King of Kings follows the life of Christ (Jeffrey Hunter) from Birth to Resurrection.  In between all of His work, we get into various subplots that connect characters together.  You have a lot of screentime devoted to Barabbas (Harry Guardino), who is plotting a revolution against the Roman occupiers.  There is Lucius (Ron Randell), the Roman official who slowly comes to accept the idea that this carpenter is The Christ.  There is John the Baptist (Robert Ryan...yes, THAT Robert Ryan), condemning the decadence of the Jewish monarchy imposed by Rome and eventually beheaded for speaking truth to power.

King of Kings in a fair world would have been called Christ's Greatest Hits.  We hit all the points of His Life: His Birth, ministry, Crucifixion, and Resurrection.  What is missing from King of Kings is a sense of wonder, of passion, of the importance of Christ.  Part of the it I think is the fact that King of Kings decided to treat Christ with such reverence that He doesn't come across as either Divine or human.  Instead, He appears to be a man of perpetual misery, boring everyone around Him with heavy pronouncements to where a "Good Morning" would come across as a declaration of the End of Days.

Now, let me make this clear: I'm in no way mocking Christ Himself.  I love Jesus (despite myself).  What I would mock is Hunter's (and director Nicholas Ray's) interpretation of Christ.  First, the figure of Jesus doesn't appear in King of Kings until close to half an hour into the film.  It doesn't help matters that when He does appear, it isn't in a spectacular or even interesting manner (which is odd given how remote Christ is throughout the film).

Perhaps as a side note, that is one of King of Kings' biggest problems.  Christ is so remote, removed, distant, from us His subjects and believers.  He isn't real, he isn't...human.  Perhaps the worst moment regarding Jesus is when he gives the Sermon on the Mount.  Rather than showing this to be where Christ offers His followers His wisdom or delve into the power of His words, as given by Hunter it comes across as a dull reciting of a list.

A lot of derision came Jeffrey Hunter's way when he played the part.  Despite being 33 at the time (incidentally, the same age Christ was at His Death and Resurrection), his youthful looks earned the film the mocking title I Was a Teenage Jesus.  The fact that Hunter looked much younger is not his fault.  The fact that he comes across as a bore is.

Again, it is the fact that King of Kings tries to be so reverential that it forgets the Humanity of Christ.  My Jesus didn't just strike poses and speak lofty words.  He was a carpenter, a working-class man who ate and even drank with sinners.  Hunter tries so hard to be 'dramatic' he kind of leaves being Human off the table.

Of course, a lot of the actors in King of Kings suffer from this case of Overt Seriousness. Siobhan McKenna, who plays Mary the Mother of Christ, near the end looks on some carpentry work Jesus left behind and says, "The chair will never be mended".  This premonition is given with such excessive emoting that I suppressed a small giggle.  Just about everyone in the film behaves like this.  Even Orson Welles' ponderous narration goes into the THIS IS SERIOUS tones.

As a side note, his diction is a little peculiar: he insisted on pronouncing Apostles "Ah-POHST-les", emphasizing the 't' which is usually silent.  I also note I'm not big on voice-over in general, let alone voice-overs that tells us everything AND everything that we're seeing.

Bless Robert Ryan for coming close to making John the Baptist human (though again, tough guy Robert Ryan?!) and bless Frank Thring for being wildly camp in his desires for his stepdaughter.

I think for me, one of King of Kings' biggest problems was that it played a bit like Ben-Hur Revisited, down to Miklos Rozsa's score.  A lot of people love it and think it brilliant.  I'm not quite there yet.  Ben-Hur was a big film about a small subject, King of Kings is a big film about a big subject, but played so grandly that it becomes small.  All that jazz about Barabbas leading revolutions, throwing in major battle scenes that have nothing to do with the life of Christ, takes away from what I imagine is meant to be a biopic and slips into a generic film set in Biblical times.

Slow, Sad, Solemn, Serious, Stodgy, Stilted.   It tries so hard, but King of Kings is no epic.  Get me DeMille anytime...