In 2007, a mere twelve years ago, Flash Gordon returned to television, dying a most dishonorable death in its first and only season. Now, I take a look at the series, beginning with its two part Pilot episode. Flash Gordon does try to be good, but it has simply too many factors against it that sink it fast.

Steve "Flash" Gordon (Eric Johnson) is a racing phenom but he's running nowhere fast. Still living with his mother Laura (Jill Teed) after the death of his father, Dr. Lawrence Gordon (Bruce Dawson) 13 years prior, the now-26 year old feels both a frustration and emptiness about it all. Making matters worse is the return of his ex-girlfriend Dale Arden (Gina Holden), whom he still yearns for.

Dale for her part, despite being engaged to Detective Joe Wylee (Giles Panton) and having a career as a local reporter, also struggles with her feelings for Flash. Their personal issues have to wait while they solve the mystery of 'the RV Dude' who is following Flash around, asking about Flash's father as if he were still alive and showing up where reports of aliens are coming up more frequently.

It's not long before 'RV Dude' is revealed as Dr. Gordon's right-hand man, Dr. Hans Zarkov (Jody Racicot), who tells them Dr. Gordon discovered a rift in space where he disappeared into another world. The space rift has reopened, but Dr. Gordon has not returned. 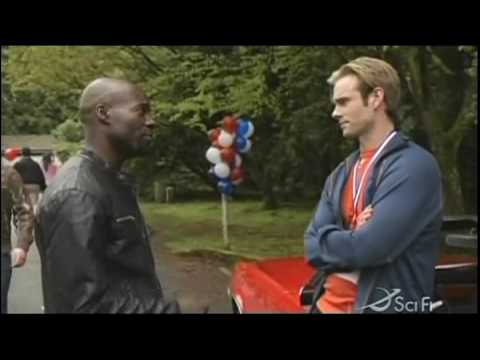 Rescued by the mysterious Chanza, later revealed to be Ming's daughter Princess Aura (Anna Van Hooft), Flash and Dale search for this 'Imex' while attempting to thwart both Aura and Baylin (Karen Cliche), Ming's henchwoman sent after them all.

The 'Imex' is revealed to be a 'Timex' watch that Dr. Gordon has, containing all the knowledge of the universe within it (as well as being able to take a licking and keep on ticking). The fight to control the 'Imex' continues, but while Flash decides, for now, not to go through the rift again, unbeknownst to him, Dr. Gordon is still alive and held prisoner.

I think Flash Gordon has some good ideas rattling around it, but one cannot start a series by focusing on one of the most camp aspects of the series: the evil Rankol. First is the name, which may be from the original comic series but which I kept hearing as "Rankle". Not only is "Rankle" a name I can't take serious, but Walker's very 'cold' performance came across as comical rather than serious. I figure Walker was directed to be very still and aloof, but instead it came across as hilarious.

Him all but floating about on something akin to a hovercraft hiding under his skirt only lends more hilarity to the hijinks.

For better or worse a lot of Flash Gordon came across as hilarious, intentional or not, with mixed results. A subplot about a Spanish-speaking trailer driver who encounters the aliens and ends up winning the lottery was I figure meant to be comic relief. Leaving aside the horrible cliche to almost racist nature of this, Ernesto (Alejandro Abellan) was cringe-inducing at every one of his scenes.

I don't fault Abellan per se, but the character was rather insulting to where I wanted Baylin to kill him.

At one point, Mrs. Gordon is being held prisoner by the space assassin as Flash comes home, aware of the situation given she called him 'Flash' (something she never did). "Hello, Flash," Laura says in what is supposed to be a zombie-like state. "Would you like some pie?" How can one not laugh at that? At this fight between the alien, Flash, Dale and Zarkov, Dale grabs something to hit the alien with. "No! Not the blender! My mom will kill me!" he says, but Johnson's delivery seems if not bored at least dry.

When on Mongo, Flash and Aura rescue Dale who had already managed to escape. Dressed in elaborate garb, Flash asks about it. "I had a Ming makeover," she replies, but again Holden delivers her line as if it is not worth bothering to try and make it convincing. It could have been played for laughs, it could have been serious, but it ended up as nothing.

The performances were also less than what they could have been. Johnson had some good moments and has a nice build to him, but sometimes he looked bored to confused, a trifle unenthusiastic as Flash. Take the "No! Not the blender!" line again. He's much better when showing the somewhat clumsy manner with Dale or even when playing detective than when he has to mourn his father.

It's a pity Holden could not match Johnson when he was good. She seems almost lost whenever she is speaking. Whether facing off against the haughty, spoiled princess or seeing Ernesto win the lottery thanks to her ticket or attempting not to be one of Ming's many concubines, Holden is pretty much the same. Cliche (a name to be played with) tries to be menacing, but does not quite pull it off. Ralston's Ming has two strikes.

First, he looks like he raided Walter Mercado's closet for his wardrobe, making him less "the Merciless" and more "the Humorous". Second, he seems a bit too controlled in his rage, as if trying to be suave but not knowing how to be. Van Hooft's Aura was a hoot as the spoiled princess, and I'll cut her some slack due to having very little to work with (and that's not a comment on her costume).

To be fair, the actors en masse had little to work with, though Racicot had the 'crazed scientist' bit down. Panou as Flash's best friend/business partner Nick too did well as more 'comic relief'.

Flash Gordon could have been better, especially given that for all the Sturm und Drang of the two-hour pilot not much actually happens. The effects are not top-line though Michael Picton's theme is good. On the whole though this is a weak pilot where with some reworking we could have built up a better universe for the savior of the universe.