The Secret Life of Pets: A Review

THE SECRET LIFE OF PETS

Before scandal engulfed him, Louis C.K. managed to work both in adult and family-friendly fare. The Secret Life of Pets is his entry in a 'cute-and-cuddly' production before his fondness for unwelcome auto-erotic exercises derailed his career. The Secret Life of Pets is adequate, a pleasant-enough diversion though with elements that trouble me when I think of the target audience.

Jack Russell terrier Max (C.K.) is living the high life with his human Katie (Ellie Kemper) in New York City. He is anxious whenever she leaves him, but he has a circle of pet friends to chat with and keep him company, ranging from the disinterested heavyset cat Chloe (Lake Bell) to the hyper pug Mel (Bobby Moynihan) and cheerful dachshund Buddy (Hannibal Buress).  There's even a pretty little trick across the street, Pomeranian Gidget (Jenny Slate), clearly in love with an oblivious Max.

Max's excellent world, however, is overturned when Katie brings Duke (Eric Stonestreet), a massive Newfoundland mix, from the pound. Duke seems friendly but also territorial, pushing Max around. Max, however, has a few tricks up his own sleeve, and their war starts escalating until after one incident too many, both end up getting lost in New York.

Max and Duke now are forced to work together to escape "The Flushed Pets", a motley crew of discarded animals led by the vicious bunny Snowball (Kevin Hart). Snowball and his crew plan an animal revolution, but our two more domesticated creatures find that an impossible task. Gidget, for her part, is horrified that her unofficial boyfriend is lost and mounts a search and rescue, even if it means going to Brooklyn.

Now it's a race for Max and Duke to get back home while avoiding both the Flushed Pets and Animal Control while Gidget & Company are racing to rescue Max and Duke. Things culminate on the Brooklyn Bridge, but all's well that ends well with everyone working together to save their respective friends, Gidget finally getting Max's attention, both Max and Duke accepting each other and even Snowball having found domestication isn't all that bad.

There were a couple of aspects in The Secret Life of Pets that troubled me greatly. The first is relatively minor but one I still found irritating as the film went on: the endless shout-outs to previous Illumination Studios films. One was OK: the brief clip of Despicable Me 2's theme Happy playing in a chase. The bus sign advertising Sing however felt almost insulting, its prominence making it more so. One could be a nice in-joke, but two seemed almost as subliminal advertising.

To be fair other jokes that probably would fly over children's heads were nice touches. The telenovela spoof La Pasión de la Pasión (The Passion of the Passion or perhaps closer to Passionate Passion) that Gidget is obsessed with was nice, as was a little Alien bit. My favorite was a bit where elderly Basset hound Pops (Dana Carvey) mistakes Chloe for a dog and starts making googly-eyes at her. When she tells him she's a cat, he replies, "Well, nobody's perfect", a clear homage to Some Like It Hot.

The other element that troubled me, and troubled me more, was how violent to scary some of the elements were. We had suggestions that the hawk Tiberius (Albert Brooks) would eat Gidget, Max and Duke ineptly trying to convince the Flushed Pets they killed their owners, the mourning of a goose named Ricky whom Snowball holds to have actually killed humans (or at least wanted to), the death of Duke's previous owner, a massive snake named Viper getting crushed and the Flushed Pets forever threatening to kill those who opposed them pet or man.

Granted perhaps I'm overthinking this and children are smart enough to recognize that all this 'violence' is essentially in good fun, but I was still surprised at the level of it all. Take Tiberius' clear danger to feast on Gidget. In retrospect perhaps it plays better for children than for me: Gidget's naivete and sincerity versus Tiberius' duplicity mixed with ineptness. 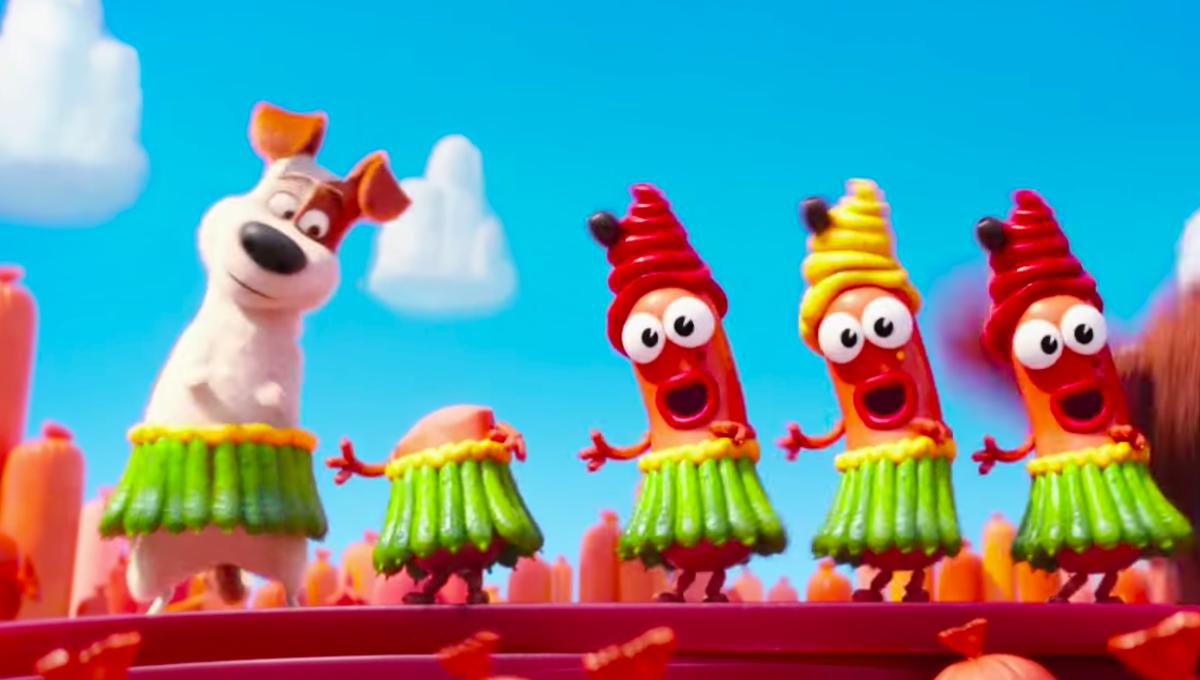 Other parts were a bit weird, such as the weiner eating montage at the Weiner Kingdom sausage factory that is one of the trippiest numbers in an animated children's film. The mixing of Grease's We Go Together with Max and Duke happily munching away at the singing and dancing wienies is what I imagine an LSD trip would look like to kids who ever tried to get high off Pixie Sticks.

Finally, the plot point of Max encouraging Duke to find his old owner seems as if it wants Max's motivations to go both ways: a sincere desire to reunite Duke with his human and a cynical way to get rid of him. It's a bit muddled in my view.

However, there are other elements that The Secret Life of Pets does well. You have some great themes about accepting new family members to where I would recommend parents about to have a new child either by birth or adoption could show the film to their kids to underscore the message. The love and affection humans have for their pets and vice versa is also a positive message, as is the idea that all kinds of humans can go with all kinds of pets.

Who would think a heavily tattooed guy would be so delicate with his little pet parakeet?

The voice work was all-around great. C.K. was a good Max, spoiled but with a genuine heart. Slate was delightful as Gidget, sweet and trusting and convinced of how everyone knew she and Max were meant to be together even if no one else knew it (Max least of all). Hart was fun and outrageous as the angry bunny. I think Stonestreet was given a bad hand in that the film seemed him to be both bully and innocent but over time the film softened both him and C.K.

Bell to my mind is the standout as the thoroughly uninterested Chloe, aware of her own superiority over dogs due to her being a cat but unable to stop herself from eating. Seeing her dignity suffer, especially on "YouTube" was a delight.

The Secret Life of Pets is pleasant though perhaps a bit darker than I would have liked. I was going to be a bit harder on the film but remembering the target audience I, like Max, softened enough to open myself to it.