It isn't often I write notes like these when watching, "Everyone in town is having sex here".  Yet the pleasures of the flesh are a dominant factor in The Escape Artist, where the off-screen death of a mutual obstacle to both Norma Bates and Nick Ford is the least bizarre moment.  One can question how it is that Norman Bates, the stumbling, shy momma's boy, gets more action than George Clooney, but such is the weirdness of Bates Motel.  Then again, given that for Norman, sex and murder slowly intermingle...

Dylan (Max Thieriot) is temporarily homeless, having moved out.  "It's you and me, Norman.  It's always been you and me," Norma Bates (Vera Farmiga) tells her other son, Norman Bates (Freddie Highmore).  Perhaps, but now Norman has a new woman in his life: bad-girl Cody (Paloma Kwiatkowski), the theater tech who is tough on the outside but deeply vulnerable on the inside (especially with a verbally, perhaps physically abusive father at home).  As part of their theater work, he almost forgets the saw, she the money for the lumber.  Norma takes an instant dislike to Cody, and if she knew that Cody and Norman went up to Cody's Magical Treehouse and got it on...

However, that's not the only screwing going on around White Pine Bay.  Emma (Olivia Cooke), the girl who has loved Norman (and who is about the only sane person in town) has now fallen hard for Gunner (Keenan Tracy) the small-time drug seller who treats her with kindness and affection.  Norman is surprisingly quite moralistic about Gunner, piously reminding Emma that he sells dope (begging the question, you had a one-night stand with a girl you barely knew, ignored Emma at the prom, are about to have sex with another girl you barely know, participated in covering up a murder, and may have potentially murdered your own father and teacher...and YOU'RE the one looking down at someone for selling marijuana?!).  She is so infatuated, if not in love with Gunner, that she asks Norma's advise about losing one's virginity. 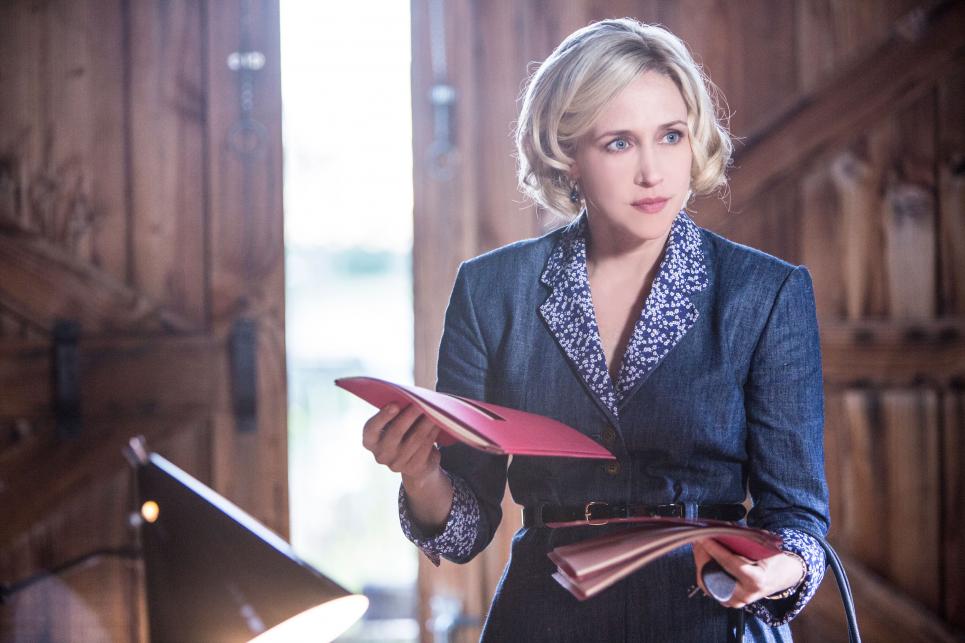 Given how Norma lost hers (at the hands of her own brother, who fathered his own nephew), she might not have been the best source on the subject.   Happily, Norma thinks that things are finally going her way.  Even if her erstwhile nemesis Sheriff Romero (Nestor Carbonell) has been forced to take up residency at the Bates Motel, she has found an ally against the bypass with Nick Ford (Michael O'Neill).  He asks her to basically be the 'front-woman' against a mutual rival, Councilman Borman.  Norma is puzzled but thrilled to find that Ford has hired a scientist to dig up an endangered species that will block the bypass' construction.  A happy Norma can mean that something disastrous will happen, and wouldn't you know it: Sheriff Romero at the end tells her that Councilman Borman was killed in a car accident.

Make of that what you will.

Dylan, despite the sheer lunacy of his life or because of it, no longer seems to care about things.  The drug war in White Pine Bay comes out into the open in a literal blaze of fire, with a drive-by shooting at him and Zane (Michael Eklund) (and thus, making our fair Oregon town more dangerous than Ciudad Juarez or Baghdad).  As the car comes back for another swipe, Dylan stands in front of it, shooting at it before both a bullet and a massive hit-and-run put him out of commission.  As he fights for his life, he is thanked by a woman who identifies herself as both Zane's sister...and Dylan's real boss.

Oh, and Emma looks like she is about to be one lover short of equaling Norman Bates' count.

Like I said, everyone was getting some action on this episode.

The Escape Artist should more than any other Bates Motel serve as example of what is a running theme: despite Norma Bates' best efforts, every time she thinks she's come out a winner, every time she thinks things are finally turning around for her, it always ends up blowing up in her face.  Part of it is indeed her own fault: why she doesn't wonder why a.) Ford is so willing to help her out given he doesn't seem to have a stake in whether the bypass comes or not, and b.) Ford can't be seen to be open about his actions, make me wonder whether Norma is so desperate for help she'll turn to anyone without really thinking things through.  Even Romero's warning to Norma to disassociate herself from Ford seems to not register.  Is it because she still harbors resentment against Romero for that thing with Deputy Shelby?  Is it because she doesn't like a man (particularly one who has thwarted her as much as Romero) being in the right?  Even the very tempting suggestion that like Cleo the Nympho of the Nile, Norma Bates will be able to cast a spell over Sheriff Alex Romero there seems to be something antagonistic about them.

Councilman Boreman's death, I'm sure, will not endear Norma to Romero...and may leave Norma wondering whether it is all some awful coincidence.

For myself, I find the romance between Emma and Gunner both oddly sweet (the drug dealer who is really a nice guy) and even more oddly, realistic.  Tracey has a charm to his Gunner, as someone who I figure doesn't see anything wrong with selling marijuana and thus, doesn't have the moral hang-ups that the surprisingly prissy Norman has.  The interplay between Tracey and Cooke is portrayed quite naturally and believably, making the Gunner/Emma romance not just a highlight, but a respite from all the insanity going on unwittingly around them.

Their performances makes me almost want a.) them to end up happily (and hopefully drug-free) and b.) a spin-off for them.

The Escape Artist also has some light moments, at least for me.  The sight of Norman Bates getting all high-and-mighty about Gunner's profession (especially given his sexual and killing behavior) is amusing, as is the undertone of jealousy on Norman's part.

Highmore and Farmiga continue to make the relationship between mother and son believable (if a bit bonkers) and individually, they continue to also be believable as individuals (though Farmiga more than Highmore).  Norma continues to be a real person: sometimes petty (her obvious delight in sticking it to Boreman is countered by her genuine worry on learning of his death), sometimes naïve (her joy in finding a way out of her predicament is almost sad given how it will turn out).  Highmore is equally good as Norman, who struggles between being good to Momma and finding pleasure.

I struggled a lot with both Thieriot and Dylan in Seasons One and Two, but now both have grown on me.  Thieriot still is saddled with perhaps the least interesting part of Bates Motel (this drug war), but he does a marvelous job of making Dylan less the 'bad boy' and more the deeply wounded, constantly beaten-down boy struggling to find meaning in a life that has had more than its fair share of knocks.

One thing I am still not warming to is Cody.  She still strikes me as terribly clichéd, more so now that we find her father is an abuser.  I think Kwiatkowski does her best with the part, but I still can't shake the idea that we've seen this 'bad girl with a heart of gold' bit before, and she is the one character so far in this series that I think is two-dimensional.  Emma, Gunner, Norma, Norman, and Dylan all seem like real people, people I would know and/or interact with.  Cody just seems like a character, not really real.

Still, on the whole both The Escape Artist is a good episode that begins to push story threads that appear to have great potential.  With Bates Motel hitting the midpoint in Season Two, it is building up to another explosive finale.  We have Norman and Emma's new romances (though not with each other), Dylan's continuing struggle to be part of something, Norma's entanglements with Ford and Romero (and with her slowly being caught in their mutual crosshairs), and the unsolved murder of the luscious Miss Watson still lurking in the background.

We may still see Norman Bates get out of things one more time...

Next Episode: Plunge
Posted by Rick at 1:14 AM