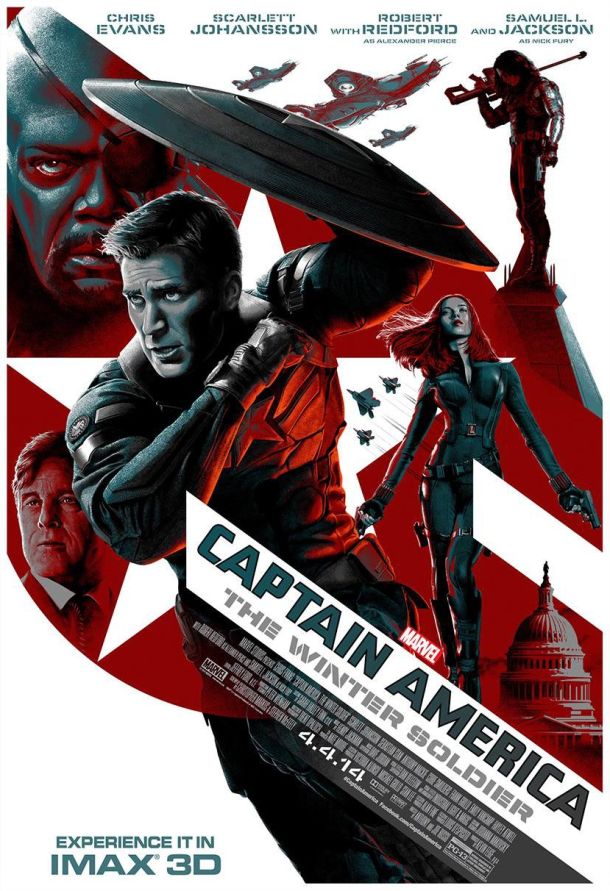 Would I be forgiven if I said that I was a little underwhelmed by Captain America: The Winter Solder?  I didn't hate it by any stretch: there are good action scenes and some strong performances (particularly by Chris Evans, who generally can't act, and Scarlett Johansson, who generally can).  I also confess that Winter Soldier has grown on me since I left the screening (albeit slightly puzzled: not having read comic books, sometimes I had to ask who certain characters, particularly in the closing credit scenes, were).  However, while I liked The First Avenger more than The Winter Soldier, the latter had more plusses than minuses.

I can't really give a major plot overview without providing spoilers.  I'll do my best to keep things as opaque as possible but to be frank I have to have a few tidbits to explain what I liked/didn't about Winter Soldier.

Steve Rogers, aka Captain America (Chris Evans) is adjusting as well as he can to the Twenty-First Century, keeping a list of all the important events he's missed (though at least he got Star Wars out of the way).  He works for S.H.I.E.L.D., most often alongside Natasha Romanoff aka Black Widow (Scarlett Johansson).  On one mission, the Cap finds something is off, and in short he finds the direction S.H.I.E.L.D. is taking in the name of national security morally wrong (remember, he IS from the 'Greatest Generation', a term I have trouble with not because I don't appreciate the struggles that the World War II generation went through, but it implies that all other generations past or future...say, Generation X...isn't any good).

In any case, the moral questions Rogers has are thrown into the back-burner after Nick Fury (Samuel L. Jackson) is viciously attacked by a mysterious force.  Whatever Fury's fate, there is something nefarious afoot at the agency, so much so that Rogers and Romanoff are forced on the run and are considered outlaws, especially by Secretary Alexander Pierce (Robert Redford), who wants to neutralize threats before they happen.

Eventually, not only do the Cap and Black Widow find out who is behind this massive conspiracy, but also come across the Winter Soldier (Sebastian Stan), a merciless assassin with a history with Cap.  With nowhere else to turn, the fugitives find help from Sam Wilson (Anthony Mackie), who has created special wings that will allow him to fly as Falcon.

Now the Cap and Black Widow must stop the nefarious actions of those using S.H.I.E.L.D. from causing all sorts of evil.

In the post-credit scenes, we are introduced to two siblings who have incredible powers (superspeed and telekinesis) and at the end, a mysterious figure from Rogers' past visits the Captain America exhibit at the Smithsonian and learns something of his true identity.

Perhaps my great problem with the Marvel Cinematic Universe is that I, never having read comics, really don't know a lot of what causes gasps.  My coworker Fabian, who insisted on going to Winter Soldier opening weekend, might have become nonplussed at having to keep hearing from me, "Who's that?"  When we saw the Winter Soldier unmasked, I sarcastically said, "Should we be shocked?"  He replied yes, even though anyone who knows at least something about the story (which I did) would know who the Winter Soldier was.  I did ask in the first post-credit scene, "Are they mutants?"  The technical answer is that yes, they are, but given the rights issues we really can't use the term 'mutants'.

That has been, for me at least, the biggest thing that keeps films like Winter Soldier and all their connected films a bit distant from me.  I shouldn't have to watch things like Agents of S.H.I.E.L.D. or read the comic books and/or have vast comic book history knowledge to try and keep up with whatever is going on.

Now, there are some other Winter Soldier aspects that did puzzle me.  No matter how often people try to convince me otherwise, I am immune from feeling anything over the 'death' of a character whom I suspect is not really dead.  Doctor Who 2.0 specializes in killing off characters only to have them return sans reason, and Agents of S.H.I.E.L.D. is built entirely on a character whom we last saw killed off (rather convincingly) in The Avengers (no spoilers there, and for the record I campaigned for a Best Supporting Actor nomination for Clark Gregg).  One almost wishes George R.R. Martin were involved in the MCU if only to make sure dead characters remained...well, dead.

Christopher Markus and Stephen McFeely's screenplay also takes too many liberties with reality.  Why would Pierce place weapons on the World Security Council members' pins if he thought his plan would be foolproof?  How did the Cap get the flashdrive into the vending machine without anyone noticing?  How did said 'non-dead' character convince both medically trained staff and machines that said character really was dead?  I'm sorry, but it was not a shock to find this person alive.  It would have been a shock to have found the character actually...dead, and not just merely dead, but most sincerely dead.
Finally, this whole quasi-Dr. Strangelove business (when we get a big revelation and the return of yet another character from The First Avenger, all I could think of was that said character was coming close to calling out, "Mein Fuhrer, I can WALK!") and the inner workings of a massive Illuminati-type conspiracy struck me as almost laughable.

However, my BIGGEST beef with Winter Soldier is that, for a character whose name is in the title, the Winter Soldier himself played a small role in all the machinations going on.   He was part of the major action sequences, but apart from that was he really necessary apart from because he was part of the Captain America mythos?   The sentimental/secret visit by Cap to his Smithsonian exhibition (or as I call it, a plot exposition scene) all but tells us what will happen, but as for his actual role in the movie, it was rather minimal.

Again, I don't think Winter Soldier is bad by any stretch.  Directors Anthony and Joe Russo kept the movie flowing to where the two-hour spectacle speeds by.  The action scenes are all big and loud (just like we like 'em), and within it there are some strong performances.

I start out by saying that I am NOT a Chris Evans fan.  I don't think I will ever shift him from my Worst Actors List, but I am willing to amend my thinking to a certain degree: Chris Evans CAN'T act EXCEPT as Captain America.  For some reason the character is the only thing that triggers anything close to a performance out of our beautiful creature.  In his conflict between the world as he remembers and as it is, in his concern over how things are drifting, Evans manages to convince that he IS Captain America.

Would that he do so every time he's on the screen.

Similarly, Johansson does such a great job as the mysterious and world-wise Black Widow that I can see how calls for a spin-off for her character keep growing.  Johansson creates a character who is smart, committed to the mission given to her, and moreover has wonderful rapport with Evans.  She has so smoothly shifted from one of my Worst to one of my Best Actresses working today that I tip my hat to her.  Anthony Mackie makes a strong impression and a welcome addition as Falcon, and the interplay between him and Evans is equally strong as that of Evans and Johansson.

I do also congratulate Winter Soldier for tackling the issue of security versus freedom, of how far we should go to protect the world.  These issues plague us now, and Winter Soldier, while not taking sides (I've seen comments on how it is both a conservative and liberal film) it at least gives us the ability to see that, like all good allegories, it can tell a smart story without skimping on the action and daring-do we've all come to know and love.

Oh, if I must confess if made to choose I prefer The First Avenger over Winter Soldier.  As I am removed from my first initial reaction I think there is much to admire in Winter Soldier.  I also confess that because I don't know much about the MCU, non-comic book people like me may get a little perplexed by it all.  However, despite the fact that I still feel the actual character of the Winter Soldier didn't play as important a part in the proceedings as he could have (and I think, should have), on the whole Winter Soldier is a strong addition to the Marvel Cinematic Universe.

Does this mean I HAVE to watch Agents of S.H.I.E.L.D. now?

Next Marvel Cinematic Universe Film: Guardians of the Galaxy