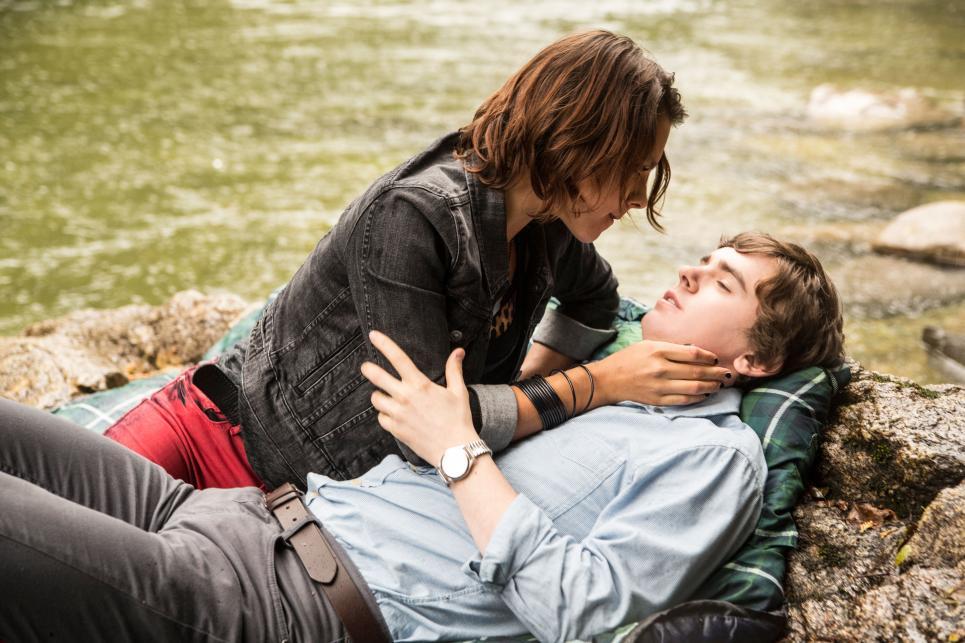 The Course of Bates Love Never Did Run Smooth...

The Escape Artist was a mild reprieve from the craziness Bates Motel excels in (or at least as mild as the show will allow).  Plunge throws us into the mayhem that is the show's forte, and at least now we have what we have never had: Norman Bates' first confirmed kill.

Norman Bates (Freddie Highmore) and his mother Norma (Vera Farmiga) look like they finally are getting what they want.  It seems that all the horrors of the past are slowly receding.  With the encouragement of her new bestie Christine (Rebecca Creskoff) and Christine's brother, former lawyer George (Michael Vartan), Norma make lemonade out of the lemons of her late rival Councilman Berman's death by asking the Mayor (Andrew Airlie) to have her fill his seat.  Despite her growing misgivings about her association with Nick Ford (Michael O'Neill), which her temporary hotel guest Sheriff Alex Romero (Nestor Carbonell) advises against, it is precisely her connection with Ford that impresses His Honor the most.

Norman, for his part, is growing infatuated with both 'bad girl' Cody (Paloma Kwiatkowski) and the idea of getting his driver's license.  Cody may be falling for our geeky hero, but she still has problems at home, in particular her abusive father.  Fortunately, she is close to turning 18 and thus free from having to live with him.  They ditch the tech crew for a nice time at a remote location, unaware that Emma (Olivia Cooke) and her new boyfriend Gunner (Keenan Tracy) have pretty much the same idea.  Cody suggests they all take a literal plunge.  Norman has misgivings but does so to his delight.  Then it is Emma's turn.  Her illness puts her in danger of drowning, but goaded into things by Cody, she goes in and nearly dies.  Norman rescues her, then scares everyone with the intensity of his fury.

Dylan (Max Thieriot) has his own problems.  His real boss, Jodi (Kathleen Robinson) puts him up at her house far from town to help in his recovery, then tells him she is putting him in charge of operations but Dylan has to keep Zane from finding out he, not Jodi's brother, is the real power.  Oh, and she sleeps with him (given how everyone was getting some, it seems fair that he get some too).

Things come to a head with a chain of information.  At one point, Norman and Cody hide in her closet.  Norman starts having flashbacks to his own father's abusive behavior towards Norma and blacks out.  Cody, alarmed at the frequency of these blackouts, tells Emma, even though Norman has asked Cody not to tell his mother.  Emma, worried after Norman's intensity at the swimming hole, breaks down and tells Norma just as Norman is about to take his driver's license test.  Without missing a beat Norman stops the driving test and asks if one can get a license who suffers blackouts.  The instructor immediately cancels the test, and Norman is furious.  Confronting Cody (having walked all the way), they are interrupted by Cody's father, and in the fight that ensues Norman pushes Cody's father down the stairs.

In the great scheme of things, Councilwoman Bates is not the nuttiest idea that Bates Motel has ever introduced.   I would say it is almost downright rational.  Plunge however, does what I think are two things right.  First, it minimized the drug war White Pine Bay finds itself in (which I have felt was always the weakest part of the series) to where it is in the background.  Second, it puts various other threads (Cody, Gunner, Bates parent and child) and combines them into a situation that appears normal, almost frighteningly so.

The entire swimming hole scene struck me as highly realistic: teens behaving foolishly, Norman's protective nature getting the better of him, Gunner regretful he put the girl he likes in danger, Cody realizing she may be tough, but Norman is far more dangerous than she is.  We also get the idea that Norman is struggling to break free from Norma's control (though given how Farmiga makes Norma to be, the degree to which Norman is allowed to be controlled rather than how much control she actually has is a bit hazy).

Did she stop Norman from getting his license because she was genuinely concerned he would have a blackout while driving, putting him and others in danger?  Was it a subconscious desire to keep him under her thumb, with her latching on to anything to stop him from getting a driver's license (i.e., his freedom)?  It is all a bit murky, all these interfamily politics, but now Norman's growing anger pushes him from everyone and everything.  His mother slips between his dearest friend and his bitterest hindrance, Cody is either the temptress or the danger, Emma is the friend he can confide almost anything to.

Kerry Ehrin's script doesn't give us straight answers, which is perfect in that there is still room for doubt on both sides.

In regards to Norma, we get now strange possibilities.  Norman takes an instant dislike to George (who by all accounts so far is a rare thing in WPB: a nice, rational guy), setting up a strange sense of jealousy on little Normie's part.  Romero, for his part, tells Norma she should close the curtains because he can see her in various stages of undress.  Does this please either?  Are these two bound for a tryst?

What BABIES these two could make: her face, his eyelashes, their beautiful figures together...sorry, got lost there for a moment in a 'shipper' fantasy.

Plunge has top-notch performances from just about everyone (still not buying what Kwiatkowski is selling) and it allows for a greater focus on Norman and Norma.  This does mean pushing Dylan and his Drug War to the sidelines, but unless Bates Motel gets them together in an epic storyline the drug thing seems from another show altogether.  Plunge also is not afraid to torture our leads: just when Norma achieves something wonderful, Norman has to screw it up.  Just when Norman is about to find freedom, Norma comes along to screw it up.

Talk about hurting the ones you love...

Next Episode: Presumed Innocent
Posted by Rick at 6:13 AM