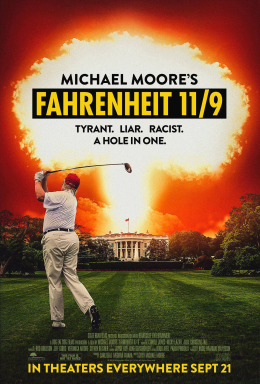 After an unexplained eight-year absence, Michael Moore is back with his latest effort, Fahrenheit 11/9. By now one's view of Moore should be settled by the viewer: those who agree with him will love it, those who do not agree with him will hate it. I found Fahrenheit 11/9 quite amusing, even hilarious at times, and perhaps persuasive until he does what he often does: become scattershot and prone to going overboard.

Quoting from his previous take-down of his hated nemesis the GOP, he begins by asking "Was it all a dream?". We start with the 2016 election, one that guaranteed his somewhat personal choice, Hillary Clinton, would win massively. He and her supporters happily singing Fight Song and eagerly awaiting the electoral sweep; then things took a strange turn and we found that Donald Trump, whom the film suggests never really planned or wanted to be President, ended up winning.

The entire 'Trump for President' thing, if Moore is correct, was really a ploy to get more money for The Apprentice than The Voice's host Gwen Stefani. Once this megalomaniac saw how adored he was, he decided to keep at it.  This section ends with "How did the f*** did we end up here?"

After this though, Trump becomes an afterthought for a long stretch. Fahrenheit 11/9 then shifts to among other topics the Flint water crisis, the West Virginia teachers strike, the Marjory Douglas Stoneman High School shooting, various Democratic candidates running for Congress (including two rising stars of the Left: Alexandria Ocasio-Cortez and Rashida Tlaib), ending the Electoral College and declaring the United States is a Leftist country before returning to Trump, whom he compares to Hitler and strongly implies that we are inches away from becoming Nazi Germany unless we heed his call. 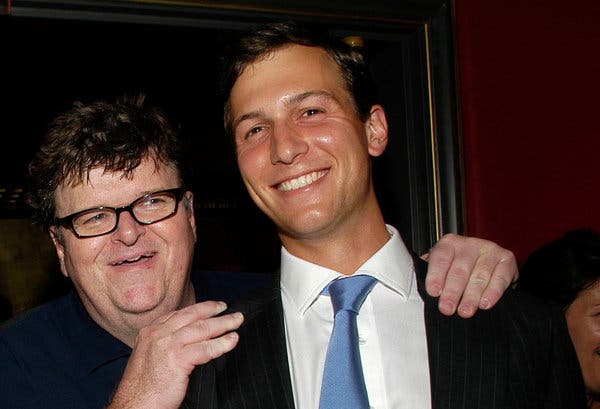 Again, there's never any subtlety to a Michael Moore film, so one should go into Fahrenheit 11/9 knowing that it, like all his films, is not a pure documentary. It goes even beyond what most 'documentaries' are now: essentially advocacy pieces for whatever they are chronicling. Fahrenheit 11/9 is a freewheeling cinematic essay where he can express his views and make the connections to what he wants however he wants.

As with all my experiences with Moore's films, he comes close to convincing to his views until he goes one step too far and I if not recoil at least think he goes overboard to the point of insanity. Fahrenheit 11/9 for example through subtle innuendo (to quote a song) suggests President Trump has incestuous desires for his oldest daughter Ivanka. He does not flat-out state Trump wants to have sex with or has had actual sex with his own daughter. Instead, he does this by showing a montage of pictures of them together, focusing on where Trump has his hands. He takes a Barbara Walters interview with his four adult children (Barron too young to be interviewed) and when they answer that Ivanka is their father's favorite, the music and the previous montage again suggest that there is something tawdry and grotesque in the Donald/Ivanka relationship.

Moore also fails when he 'dubs' Trump's voice onto an Adolph Hitler speech and rally. Again there is no subtlety in his arguments.That old maxim of losing an argument when you compare your enemies to Hitler either seems to have escaped Moore or is of no interest to him.

In fact, Moore doubles down on the Trump-Hitler comparison. Everything Trump says or does, from rather innocuous jokes about becoming "President for Life" to declaring media outlets 'fake news' all apparently come from Trump's The Art of Mein Kampf.

Fahrenheit 11/9, curiously though, does not delve much into exactly how we got a President Trump. He does circle back to it after going through the most effective element in the film: the Flint water crisis, a subject that would merit a whole film itself. Moore mentions that Trump was the only candidate of either party to actually visit Flint and takes former President Obama to task for essentially parroting the line about how the Flint water is now safe, down to pressing the point about Obama's 'stunt' of "drinking the water" when he just touched it with his lips.

What the end result of either visit really was we do not learn.

By the time we get back to Trump after he excoriates Michigan Governor Rick Snyder for his 'ethnic cleansing' and celebrates the Douglas Stoneman students for their activism (save for the more openly conservative MSD student-activist Kyle Kashuv), the viewer has pretty much forgotten all about Trump.

I think conservatives, despite their loathing of Moore, will find things in Fahrenheit 11/9 to enjoy. Those on the right will delight in reliving Mrs. Clinton spectacular failure to achieve her sixteen-plus year campaign to return to the White House as President in her own right. Moore, to his credit, also takes on the Democratic Party establishment, particularly in the way they tipped the scales for Mrs. Clinton against Senator Bernie Sanders.

As with almost all Michael Moore films, you won't see interviews with those who disagree with him or anything that contradicts his views. His films are as I've said: cinematic essays and should be seen as such. You also see that he again comes close to persuading until he goes one step too far (one can be Never Trump but not think he either wants to or has made his daughter his mistress).

Those who see Fahrenheit 11/9 should know what they are going into. It's partisan and your embrace or rejection of it will in large part be based on that. For my part, I can say I was fascinated by it all, if not convinced at least entertained at the sheer lunacy of it all, of both Donald Trump and Michael Moore.

Email ThisBlogThis!Share to TwitterShare to FacebookShare to Pinterest
Labels: 2018, Review