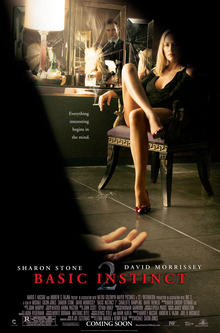 Nearly 15 years after Basic Instinct shocked America with its graphic sexual and violent content, we're treated to the continuing adventures of our favorite bisexual murderess with Basic Instinct 2. The sequel, I was told, was horrible, with more obscene sexual content, bad performances and an illogical story.

All that is true, but goodness did I find it all hilarious.

Catherine Tremell (Sharon Stone) is involved in the death of football star Kevin Franks, who died when the car they were in plunges into the River Thames. Detective Ray Washburn (David Thewlis) is absolutely convinced she's a coldblooded killer, but they have to have a psychological evaluation. Assigned this task is Dr. Michael Glass (David Morrissey), who has his own issues.

A previous patient killed his pregnant girlfriend and Glass blames himself. Whether he knew said patient was dangerous is a subject of debate that hangs over the film and is mentioned repeatedly. Despite any common sense Glass agrees to take Catherine on as a patient.

There's a lot of 'despite any common sense' in Basic Instinct 2.

As more people start dying off (a nosy reporter, Glass' ex-wife, Tremell's drug dealer), Washburn is convinced Tremell is the murderess while Glass finds himself slowly seduced into her wicked sex games. And yet, who is the killer? The "shocking" ending leaves one person in a psychiatric hospital, with a hint that maybe even the master player got played.

Basic Instinct 2 requires a great deal of stupidity by just about every character, even the waitress with whom Glass has a one-night stand and is never seen or heard from again. The film is filled with outlandish coincidences and leaps of logic that will provoke one of two reactions: puzzlement or laughter.

Glass' mentor, Dr. Milena Gadosh (Charlotte Rampling), despite talking with Glass about the highly-covered Tremell case, has no idea who Tremell is when she talks to her at a party. More outlandish, the highly respected and literally wigged-out Dr. Gerst (Heathcoate Williams) has Tremell as his guest at said party and at Glass' informal interview for "the Douglas Chair" despite her connection to a murder case. Even more outlandish, Milena and Catherine have some 'girl-talk' while Gerst tells Glass that he cannot recommend him for "the Douglas Chair" because of the past patient who killed his pregnant girlfriend.

It's not because Glass (and Gerst) are running around with a woman who has been and is currently a murder suspect. It's because there are whispers that Glass may have known the past patient was dangerous, whispers that came via a sleazy tabloid reporter who was sleeping with Glass' ex-wife before the reporter was bumped off in some kind of kinky S&M death.

I wonder if "the Douglas Chair" was a tongue-in-cheek reference to the missing Michael Douglas from the original, though perhaps that is giving Basic Instinct 2 far too much credit.

Anyone else think this whole setup is already bonkers?

Leora Barish and Henry Bean's screenplay has a cacophony of stupidity that astounds. At the top is how it is almost at the end of the film that Glass discovers Tremell's connection to the original story, which astoundingly was not brought up or apparently discovered by either the sleazy reporter or the sour detective.

Over and over you keep thinking 'these people (Catherine included) must be stupid'.

The performances are of no help. Stone is trying too hard to be vampy and ends up campy. Her efforts of playing the femme fatale make her come across as overtly over-the-top, making her scenes with Morrissey come across as more hilarious as he tries desperately to play things straight. I sensed that Thewlis was suppressing giggles whenever he had to perform as the gruff detective who seems totally clueless. I could not suppress giggles, however, at Washburn's end. I flat-out howled with laughter.

Hugh Dancy as Adam Towers (said sleazy tabloid reporter) and Indira Varma as Denise (Glass' ex-wife) were not in the film long enough to leave any impressions, though here it may be a blessing.

Rampling somehow managed to come out of this disaster with her dignity intact as she, despite Milena's own idiocy, seems to be the closest person with reason.

The actual sex scenes are, apart from Glass' tryst with fellow doctor Michelle (Flora Montgomery) who also disappears from the film after he gets too rough with her, are hilarious. As a critic who tends to get lost in details, I kept wondering how Glass managed to keep breathing and thrusting with a belt tightly wound around his neck.

Worse of all, it takes an hour and sixteen minutes before Glass finally gives in to the pleasures of Catherine's flesh, with only forty minutes left in the film.

The film also has simply horrible camera work. If you notice, you can see the camera literally shaking at times, though perhaps the cameraman was struggling not to laugh as Catherine went for another "Would you like me to seduce you?" scenes.

Basic Instinct 2 is not a good film. However, it is a surprisingly funny one.