GOTHAM: THE TRIAL OF JIM GORDON

As Gotham ends its run, we get a hint of what might have been and what it was in The Trial of Jim Gordon. This episode has two of its cast work behind the scenes: Jim Gordon (Ben McKenzie) wrote the episode, and Barbara Kean (Erin Richards) directed it.

For good and bad, it shows on both fronts.

Gordon has called a conference for the gangs to have a cease-fire to keep the water supplies up versus having a free-for-all with questionable water. The gangs appear to agree when a shot rings out. It hits Gordon. Despite Harvey Bullock's (Donal Logue) suspicions neither Penguin (Robin Lord Taylor) who organized the conference, nor Bonkers Babs did the hit.

As Gordon slips in and out of consciousness, he imagines himself on trial for his continuing failure to bring peace to Gotham. He condemns himself and is about to be electrocuted (in other words willingly die) but the thoughts of his unborn child and Dr. Leslie 'Lee' Thompkins (Morena Baccarin) bring him back from the brink.

As to the actual shooter, that is Victor Zsasz (Anthony Carrigan), but he is under the spell of Poison Ivy (Peyton List). It's all part of her plan to stop reunification and return Gotham to its literal roots. For this, she has not only hypnotized Zsasz, but also Bruce Wayne (David Mazouz), who in turn hypnotizes Lucius Fox (Chris Chalk) as part of her nefarious plans. Only Selina Kyle (Camren Bicondova) can stop her now-enemy.

The Trial of Jim Gordon has certain positive elements, though they come more from what has been established than from the episode itself. At the heart of the good is the Bruce/Selina relationship. Mazouz and Bicondova have always worked well together in their Bat-Cat dance, and their 'date' was a nice respite from the horrors. The script gave them something to work with, especially in their fight while Bruce is under Ivy's spell.

The fight itself was a bit hard to follow, but the interplay between Mazouz and Bicondova was excellent. We even were allowed a little bit of comedy whenever we saw the men under Ivy's control. Mazouz did well here, making when he is released from her spell from a strong kick by Selina a touch anticlimactic.

Carrigan, however, is the standout as Victor Zsasz. He's never failed to be funny, but the 'hypnosis' element gives his sarcastic yet innocent comments more lightness, as if being in love makes him even more offbeat. As good as the Bruce/Selina fight was, I thought the Victor/Harvey fight was better.

Somehow, the Bruce/Selina subplot, down to a genuine kiss between them, overtakes the main plot. Gordon's trial is where The Trial of Jim Gordon flounders.  I would have thought that storywise, things would have worked better if Gordon were not just prosecutor but also judge. As such, he would literally be judging himself.

Perhaps the rush to complete Gotham blunted a good idea. A longer season could have allowed for more witnesses for the prosecution. We got a glimpse of Gordon's wake (which was the only scene that allowed Cory Michael Smith's Edward Nygma a chance to appear, where he tickled the ivories while Pengy belted out a tune), but I think Richards could not resist a little visual flair. 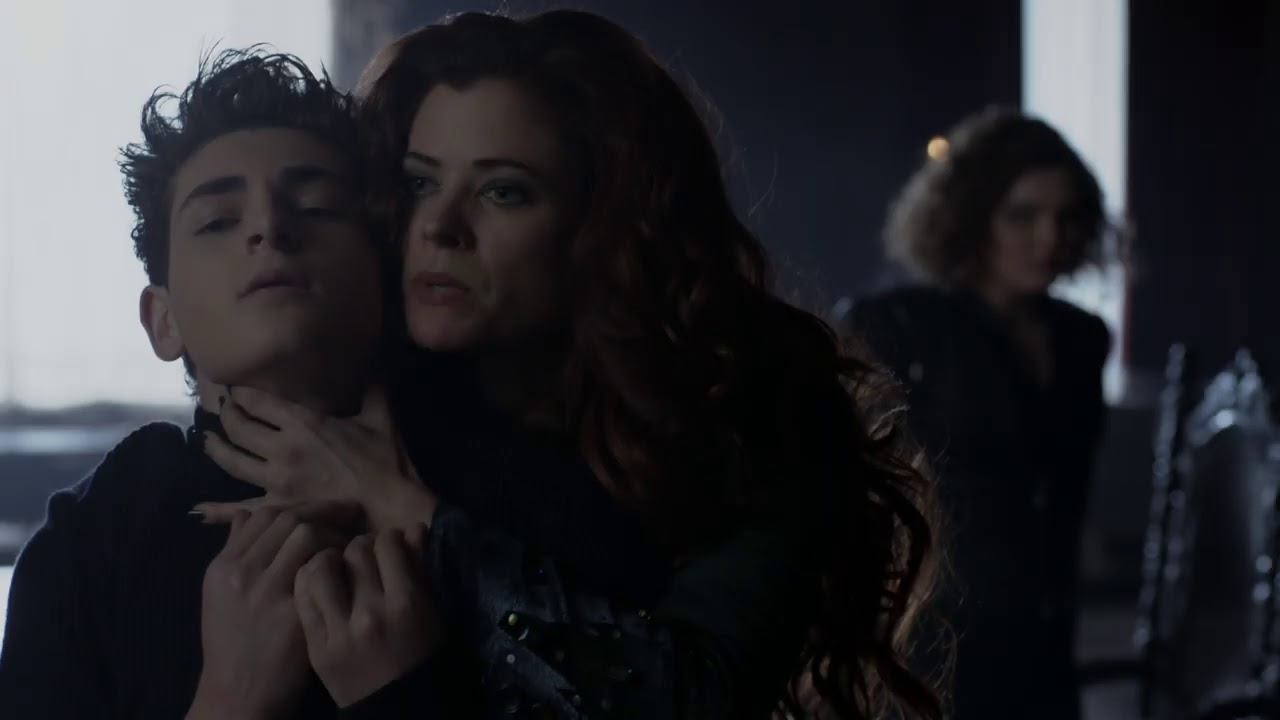 A lot of The Trial of Jim Gordon had what I see is an actor-turned-director motif: the 360-degree turn. I'm not sure why actors who direct episodes of the shows they are in love to have the camera make 360-degree turns, but we got that when Bullock brings Gordon to the station to try and save him.

I also think the story was a bit rushed, but again given the time pressure Gotham is on I'm cutting it some slack.

As good as some of the performances were, some were not that good. Baccarin was almost hilarious in her frantic fears and hysteria about Gordon. Richards didn't seem to have that much emotion, and even the usually reliable Taylor seemed to be almost coasting. In fairness, it was nice to see List vamp it up while still managing to be something of a threat.

As a side note, what is the budget for hair gel on Gotham? I note that Mazouz and Taylor seem to have very high, stiff hair in this episode. I'm just curious.

There is a lot of good in The Trial of Jim Gordon. A theme touched on but perhaps not explored deeply given the time limit was how both Bruce and Jim carry a lot of guilt and blame for how things are. We got some nice comedic moments from Carrigan in particular. The duet of David Mazouz and Camren Bicondova continues to be a highlight.

I can't shake the idea that I am being too generous with The Trial of Jim Gordon. I think it's because I know Gotham has only three episodes left in its run. It's a pity that a lot of time seemed to be wasted in those years.