Pumpkin Pie Wars may be my last sojourn into the world of Hallmark Channel original films. Just as with Dater's Handbook, I would not have bothered with this film either save for the fact that one of its stars is Eric Aragon. I am not an Eric Aragon fan. I am, however, an Aragon, and as such, I feel almost obligated to check out what Cousin Eric* is up to.

Pumpkin Pie Wars has what I worry is a Hallmark Channel movie trend: inconsistencies in the plot that drive me crazy. It is not particularly well-acted but I suppose rather harmless if one gave it no thought.

Former BFFs Faye McArthy (Michelle Scarabelli) and Lydia Harper (Jennifer-Juniper Angeli) had a massive falling out at the 32nd Emeryville Harvest Festival when Faye learned that Lydia was going to open up a bakery solo rather than jointly. As much as Lydia protested that her father would not have given her the money unless it was a solo project, Faye refused to listen. Her only consolation was in winning the Annual Pumpkin Pie contest.

An accident forces Faye to drop out of the Pumpkin Pie contest, which could mean financial ruin if she loses again and the publicity from the show Pie Heaven goes again to her hated rival. Casey is the only one who can jump in. Sam has his own problems, as Lydia constantly squashes his hopes to expand Fuller Street to a full-service restaurant.

What Casey needs is an instructor to guide her to the art of baking. What Sam needs is a financial presentation to win Lydia over. Looks like we have a recipe for romance. 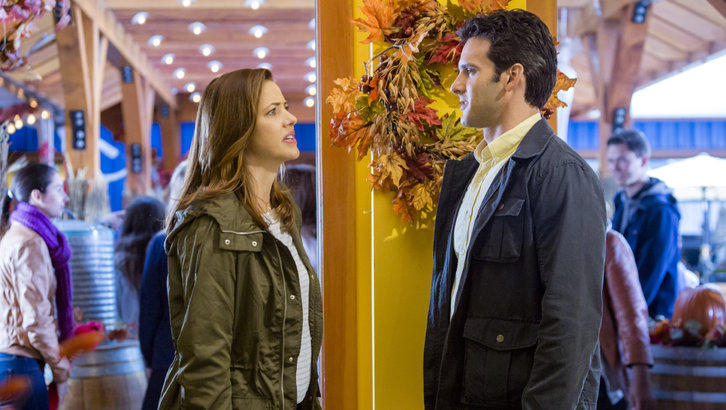 As they secretly help each other, they fall in love, a Romeo & Juliet among the pie crust. Eventually though, everything comes out, much to Faye and Lydia's displeasure. However, they are forced to join forces against a surprise frenemy: Betty Lund (Dolores Drake), one of the few people who has managed to maintain friendships with both of them.

Betty, a nine-time also-ran against Lydia and Faye, seizes her chance amidst the McArthy/Harper entanglements essentially by cheating. Now it's up to Sam and Casey to metaphorically and literally get together to save their respective dreams: Casey the bakery, Sam his restaurant.

Pumpkin Pie Wars had an element in it that is a personal pet peeve. I have been accused, not without cause, of becoming fixated on details, the most notorious example being Get Out, when I kept asking why there were candles in the operating room. It was a pesky detail that simply would not let go.

In Pumpkin Pie Wars, we have a similar situation. Sam at one point tells his mother that he did not train at the Cordon Bleu IN LONDON (emphasis his) to make pastries for the rest of his life. Later when Casey compliments him on his skills/gives an info dump, she remarks how he was the former star quarterback who went to culinary school in France (emphasis mine). He does not correct her or even appear to notice she said France when he earlier said London.

London, to my knowledge, is not in France.

Yes, help me but I'm picky about things like this. It's just that to me such inconsistencies suggest that no one was really paying attention to things. Granted it seems like a bizarre thing to fixate on, but it just seems so odd. We had a similar situation with Dater's Notebook, when the main character says her two love interests 'passed each other in the hallway' when we clearly saw they actually interacted in front of her, albeit briefly.

Does Hallmark not bother with a continuity editor, or is it that I shouldn't care about such details? 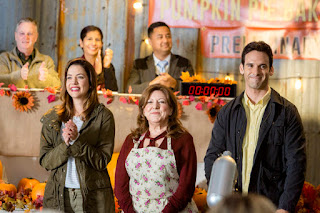 Pumpkin Pie Wars at its heart has a nice story but wants to put in some last-minute drama with Betty. It was obvious she was casing the joint for information about Casey's pie recipe and deceptively pumping Lydia for the same on Sam's. It was really the only way to have both Sam and Casey win as very late in the film Pumpkin Pie Wars threw in a Sophie's Choice scenario: Casey's winning would save the bakery, Sam's winning would save his restaurant dream.

With the story boxing itself in, why not turn to the only figure who could serve as antagonist for both: the perennial loser Betty. Even more bizarrely, for all the talk of Pie Heaven, we never actually saw a Pie Heaven host or camera crew involved. If Pumpkin Pie Wars had a Pie Heaven host interview Casey or Sam or any of the McArthy or Harper members we could have felt those stakes go higher.

Then again, such a scenario would have required to give Casey's lawyer sister a name. Rhonda Dent is billed as 'Alisa McArthy', but I don't remember her name being used once. As a side note, and again I know Pumpkin Pie Wars is meant as fluffy, light entertainment, 'Alisa' has a daughter, but unless she kept her maiden name Alisa's potential story may prove more scandalous than her younger sister gallivanting about town with her family's hot rival. 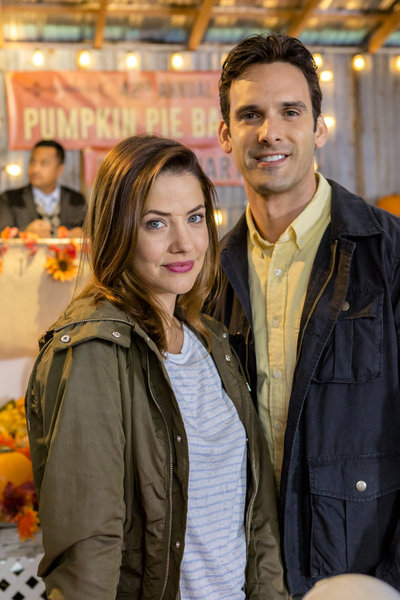 Truth be told, the secret friendship of their father Reggie McArthy (Peter Graham-Gaudreau) and Max Harper (David Allan Pierson) would have proved more interesting than either the Faye/Lydia feud or the Casey/Sam romance. In fairness though, Max was off the screen for so long I sometimes thought Lydia was a widow, especially since Reggie had more to do.

I was not impressed with Pumpkin Pie Wars acting. Gonzalo is the best of the lot: she made Casey a relatively bright figure who played Casey's culinary ineptness for the proper laughs. Cousin Eric is handsome but he seemed surprisingly relaxed in every scene, as if he thought the whole project was too hilarious to even bother finding a character to play. He played Sam as pretty calm, saying his lines in the same way: slightly disengaged but amused.

Drake was actually amusing as Betty, but not perhaps in the way intended. Her final scene of 'running in terror' after being exposed as a cheat is part unintentional comedy, part 'oh just let me off this as I walk away'. Again, I would have liked a film about her machinations given how incompetent she was as a baking spy who essentially cheated her way out of winning.

Pumpkin Pie Wars is not without some qualities. There are positive messages in it, everything from the Harper Family slogan of "Create something unique for yourself" to Casey's admonition to Sam that "Dreamers have ideas. Doers have plans".

On the whole though, Pumpkin Pie Wars is pretty weak even for the very light entertainment it is intended as. There is virtually no actual acting aside from Gonzalo (sorry Cousin Eric), with pretty weak lead characters who are not as interesting as those surrounding them. Pumpkin Pie Wars definitely does not take the cake.