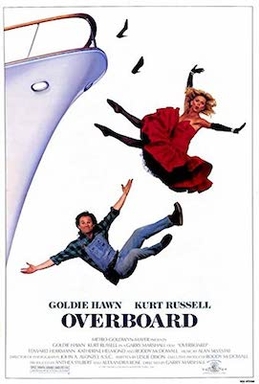 Kurt Russell and Goldie Hawn have had one of the longest non-marriages in film: 36 years together as of this writing. As such, any questionable issues regarding Overboard can be overlooked because we the audience know that they are a real-life couple. Overboard is a frothy film and should be seen as such.

Spoiled heiress Joanna Stayton (Hawn) along with her husband Grant (Edward Herrmann) have temporarily docked their yacht in Elk Cove, Oregon (which the haughty couple insist on calling 'Elk Snout'). She calls in working-class carpenter Dean Proffitt (Russell) to remake a closet and then in a huff refuses to pay because she is unsatisfied. She then compounds matters by literally throwing him and his tools off the yacht.

It isn't long before Joanna herself falls from the yacht, giving her amnesia. A nightmare to deal with in Elk Cove, she drives the local police and doctors crazy until her 'husband' comes for her. However, her 'husband' isn't Grant, who abandons her to escape her. Her 'husband' is Dean, claiming she is his wife, "Annie". Partly to get rid of her, the officials hand "Annie" over to Dean.

"Annie" now finds herself in a nightmare with Dean and his four out-of-control sons. Dean intends to have her work off her debt and then tell her the truth, but as time goes on she eventually takes control of her circumstances and becomes the mother the Proffitt boys need and a stabilizing force to her 'husband'. Dean also warms to her and they fall in love.

Everyone is satisfied until Joanna's mother Edith (Katharine Helmond) forces Grant to produce her daughter. On seeing Grant, Joanna's memory fully returns, but true love both romantic and familial will not be denied.

Overboard is not meant to be taken seriously. What makes it work is the evolution of Joanna/Annie. She is so horrid to everyone in her obnoxious, self-absorbed manner that the audience sympathizes with Dean and understands why he did what he did. However, what Leslie Dixon's script does well is that it shows her evolution from antagonist to sympathetic character. As Joanna, she is monstrous. As Annie, she is metaphorically abused until she begins to be proactive and unwilling to take Dean or the boys' abuse. Once she takes charge of herself, our sympathies shift to see her succeed, as she has shown herself to be capable of kindness and genuine love.

This is sold through the performances, all of which understood that Overboard is not meant as an exploration of class or gender roles but as a romantic comedy and which were well-handled by Garry Marshall. Hawn essentially plays three characters: the rich-bitch Joanna, the put-upon but ultimately loving Annie, and the reformed Joanna. She balances the three through a surprisingly deep performance.

The rich-bitch Joanna is haughty without being cartoonish, Annie goes from shell-shocked and mistreated to growing into a strong yet supportive and loving woman, and Joanna 2.0 becomes a better person finding wealth does not make one better.

Russell too gives a strong performance as Dean. We empathize with our working-class man to where we pretty much forgive his deception. The audience might despair over how he himself goes overboard in his treatment of "Annie" but then we see a lovely moment where we see him realize he has gone too far and shifts to start treating her better.

It's when she gets poison oak after romping joyfully with the boys and later telling off the haughty principal. Up to that point Dean went out of his way to fill Annie with a succession of horror stories about her alleged past. However, when she asks for a memory from her past that isn't horrible, he concocts a sweet story about how she saved someone's life while working in a fast-food place and became the Employee of the Month as a result. The tenderness from him and the joy from her shows that they are starting to fall in love. 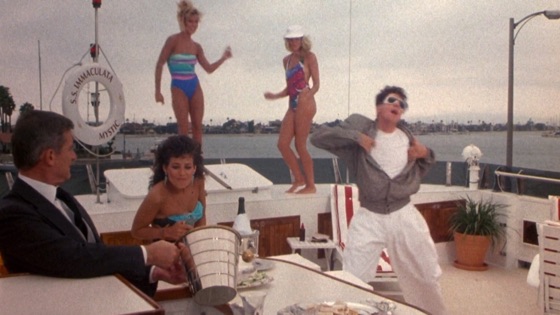 Overboard's unsung quality is the supporting cast starting with Herrmann, who was a smart enough actor to know Grant was essentially the comic foil. Whether in his remarkably PG-romps and sexcapades or how he rattled off hilarious lines without missing a beat, Herrmann played the posh twit with almost deranged glee.

Whether when calling Joanna everything from 'a hillbilly harlot' and a 'treasonous tramp' to his cavorting with a bevy of beauties, Herrmann made Grant into an over-the-top childish figure. Few people could confess to abandonment and adultery by stating "I was whacking the donkey with painted ladies" with a straight face and make both realistic to the character and outlandishly funny as the posh Edward Herrmann.

Roddy McDowell, who was an executive producer on Overboard, plays the stereotypical put-upon valet Andrew with a mix of resignation and wisdom. Helmond was the stereotypical grande dame but unlike Joanna was never deliberately cruel to others, making her more likable in her eccentricities and pampering.

The film also poked gentle fun at the alleged hicks of Elk Cove, from the slightly inept television husband-and-wife team to the harried doctor and police chief who endure the wrath of an amnesiac Joanna.

Overboard may be in the spirit of screwball comedies, but at times it does not showcase great wealth. The miniature golf course that Dean and his partner/partner-in-crime Billy Pratt (Michael Hagerty) create is shockingly cheap-looking. The story too may have some oddities, such as how both Grant and Dean were able to get away with their schemes for as long as they did, but again, this is not something the audience is asked to focus on.

Instead, Overboard asks us to focus on how these two mismatched people ultimately find love with each other once they remove the barriers that had hereto separated them. Overboard is a nice, harmless romp, one to be enjoyed as amusement and nothing more.