Captain Marvel, for better or worse, has found itself the subject of antagonism and idolization even before the film screened for general audiences. Let's get this out of the way now: Captain Marvel is neither a turning point in cinema or a disaster. I found it to be a decent-enough movie, but one hampered more by the directing and nostalgia fetish than by its lead.

'Vers' is an intergalactic Kree warrior under the command of Yon-Rogg (Jude Law) who suffers from vague memories and dreams of an unknown woman. Vers goes with Yon-Rogg and others on what he says is a 'dangerous mission'.

At this point, I would like to ask 'is there such a thing as a non-dangerous mission'?

Vers is captured by the Kree mortal enemy, the shape-shifting Skrulls (whom my BFF Gabe said looked like Romulans. Not being well-versed in Star Trek lore, I can neither confirm or deny that assertion). She is cajoled into releasing what little she knows but makes her daring escape, eventually crashing on Planet C-53, the Terran world known to Terrans as 'Earth'.

With help from Danvers fellow Air Force pilot/friend Maria Rambeau (Lashana Lynch) and Fury, Danvers pieces together her own story, with twist and turns involving both Yon-Rogg and Skrull leader Talos (Ben Mendelsohn), culminating to the rise of our newest superheroine, Captain Marvel.

I am astonished that for all the planning that goes into the world's longest and most expensive soap opera (aka The Marvel Cinematic Universe), Captain Marvel is essentially a pastiche of other films ranging from Top Gun and The French Connection to Guardians of the Galaxy and Iron-Man 3 to Spaceballs and most surprisingly Toy Story 3. Without giving too much away, we could have renamed the Jude Law character Yon-Lots O'Huggin' and Telos as The Skrull Mandarin.

Also, it is just me or does the name 'Rambeau' come off as a little too on-the-nose?

The 'oh look, it's the 1990's!' bit was a bit overdone. As much as I loved REM as a teen, I don't need to have Crush With Eyeliner playing in the background to remind me of the time.

As a side note, for the rest of Captain Marvel, Crush With Eyeliner kept playing in my head to where I almost missed hearing Man on the Moon. Pity that it was set a bit too early for one of my favorite REM songs, E-Bow the Letter, to be playing, though Drive sounds similar. Perhaps a better song would have been What's the Frequency, Kenneth?, especially the last one given we were dealing with otherworldly beings. Maybe when the superfluous Blue Man Group was attacking, but I digress.

I also think playing Just A Girl at Captain Marvel's climatic battle was way too much of a shout-out and felt out of place. Moreover, it hearkens back to Guardians of the Galaxy Vol. 2 to where you wonder if Danvers was going to shift into Mrs. Pac-Man. 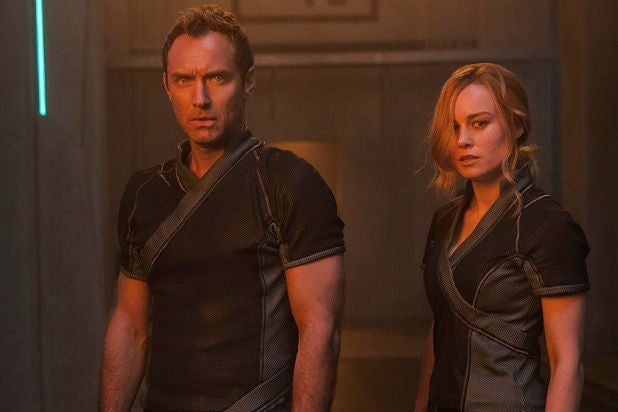 The screenplay by co-directors Anna Boden & Ryan Fleck (co-written with Geneva Robertson-Dworet) indulged in all these 'throwbacks' that called way too much attention to themselves. Why did we need Danvers in a Nine Inch Nails shirt other than to signal yet again when we are.

I think the main problem with Captain Marvel is the story itself. There are five people credited with the story, but I suspect it was far more. Not only is it a regurgitation of other films from within and without the MCU, but I think the flashbacks did the film no favors. A more straightforward story where we got to see Danvers before she became 'Vers' might have made us care more for her. It might not have made the 'shocking' twist actually shocking. However, it would have put us the audience ahead of Danvers, making a stronger emotional impact when the truth is revealed.

The Boden-Fleck directing also impacted the performances. First, contrary to the silly controversy Larson does smile in Captain Marvel. However, for the most part she is very remote, as if she were directed not to show any emotion. This holds true for almost the whole cast: Lynch, Law, Djimon Hounson as Kree warrior Korath all appeared to have no emotional range. There was no awe, no anger, no joy, nothing in their interpretation. Bening had some but it looked as if she thought she really was above it all. Mendelsohn was a pleasant surprise, showing a nice comic touch after the shift from being the villain and even some tender moments. For me he at times looked as if he had wandered off Galaxy Quest 2, but it's a nice change of pace for him.

Jackson was having a ball as the two-eyed Fury, showing a lighter side apart from 'the how I really got my eye-patch' bit that wasn't funny; his de-aging was successful to where I forgot all about it. Gregg's smaller role was good but de-aging wasn't: he looked as if he overdosed on Botox.

There is a danger of reading too much into Captain Marvel from both sides of an absurd set of controversies; what the film is ultimately is a lesser Marvel Cinematic Universe film, one that recycles past MCU tropes with some weak performances (though I would argue it is more the directors' fault than the actors). The mid-and-end credit scenes were not good or funny, but the opening Marvel Studios credits were a nice tribute to Stan Lee.

Captain Marvel does not merit either the lavish love or fierce hatred it has received.