I am not big on Hallmark Channel films. As such, I would not have bothered with something like Dater's Handbook save for the fact that Dater's Handbook is the final performance of one Meghan Markle, who left acting to pursue a career as Her Royal Highness the Duchess of Sussex.

This is the first time I have seen Markle act, as I never saw her television series Suits.  Markle is fine in Dater's Handbook. It's the rest of the movie that I am puzzled by.

Cassandra Brand (Markle) is a highly successful Denver marketing director. She is also unsuccessful in love, with her current boyfriend Peter (Matt Hamilton) being especially atrocious. The sports-loving bartending jock not only won't consider marriage, he won't even accompany Cass to her assistant's wedding!

As such, she goes alone and finds herself in Table 5, the children's table. This oddity is helped somewhat by the appearance of Robert Zappia (Kristoffer Polaha), who is also seated there. Robert and Cass strike up an instant connection, especially given that Robert is almost amused at Cass' odd habit of stealing bits of food off his plate.

It's at this point that Cass, prodded by her sister Nadia (Christine Chatelain), starts using The Dater's Handbook, a self-help book by "Dr. Susie" (Teryl Rothery). Dr. Susie's main advice is to find a man that is 'reliable, responsible and dependable,' three things Peter isn't. She breaks off with him and after reencountering Robert, starts going out with him.

She finds Robert fun, spontaneous and slightly goofy. Things seem to be going well until one of Cass' clients, George Kazminski (Jonathan Scarfe), asks her out. George fits The Dater's Handbook profile to a T: he takes her to art exhibits, chamber music concerts and French restaurants, all things Robert wouldn't.

Nadia favors George, while their mother Gloria (Lynda Boyd) prefers Robert. The checklist and The Dater's Handbook would go for George. However, which man will Cass choose? 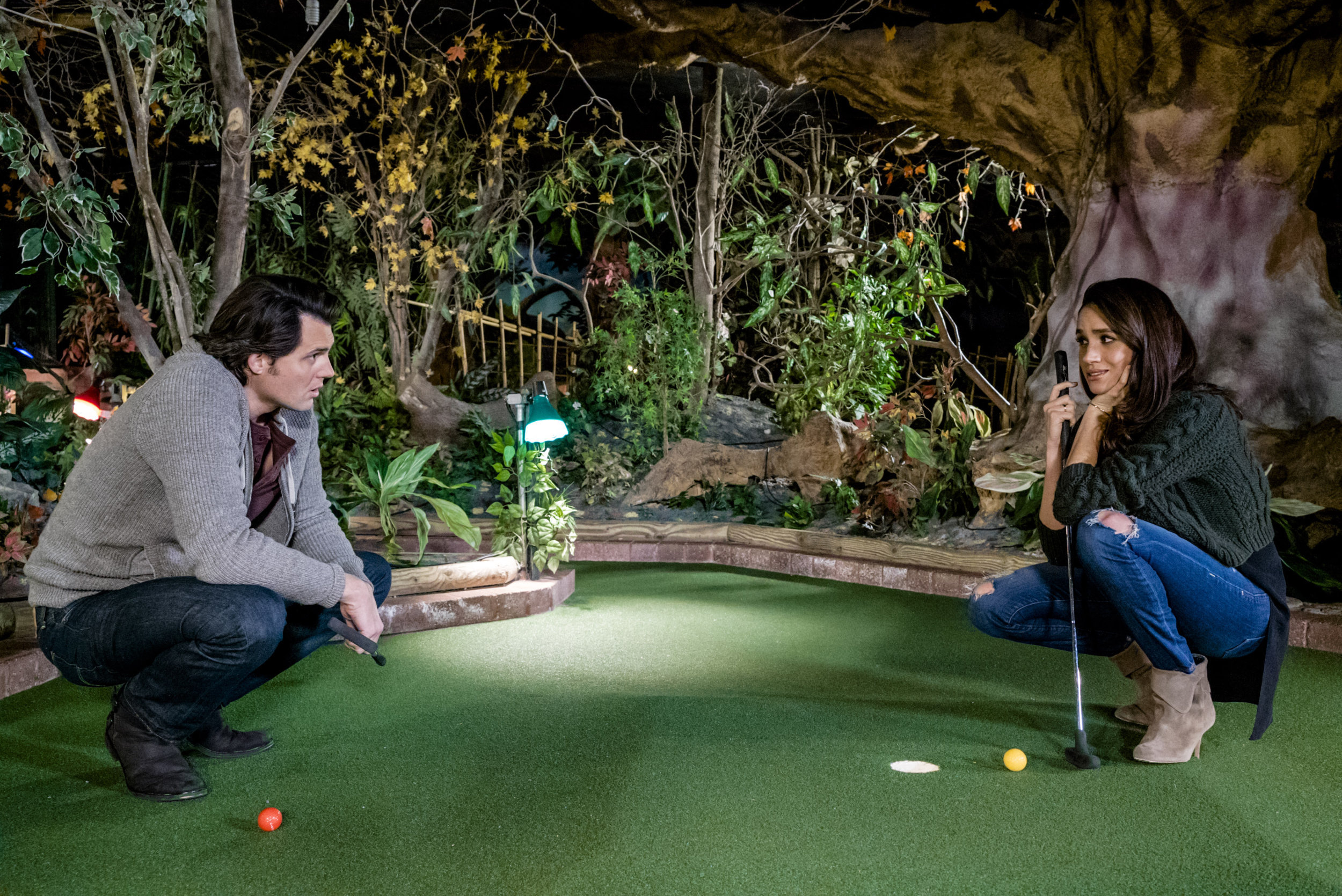 If you genuinely do not know whom Cass should end up with at the end then you have no discernment whatsoever. Dater's Handbook throws in a very bizarre 'twist' about whom she first chooses, then teases the audience for a bit by withholding that information until we see whom she invites to her nephew's birthday party. Given we have at least a half-hour before the end, we know both whom she initially chose and that it was the wrong choice.

Dater's Handbook is muddled by the fact that Robert is if you go by the actual Dater's Handbook a good choice. His flaw, if you can call it that, is that he is more laid back and casual in his manner, but he is nowhere near Peter in terms of boyfriend material. Robert is reliable, responsible and dependable; at each turn in the Robert/George debate, the former shows he is a remarkable catch.

He gets Cass a new iPod for her birthday after having accidentally broken hers. He charms the kids he finds himself seated with, quipping he'll order them a round of Shirley Temples on him. On the make-or-break date, he chastely sleeps over to make sure she's OK after accidental food poisoning. He shows up on time and even got Gloria REO Speedwagon tickets after learning that was her favorite band.

As a side note, one can question whether Robert pulled strings to get them since he is an official with Denver's Parks & Recreation Department and REO Speedwagon was performing for an invitation-only event, but like a lot in Dater's Handbook, that goes without much thought.

One is genuinely puzzled why Cass would think it was such a debate. One is also puzzled why George is drawing her into an emotional quandary. George's only real flaw, again if you can call it that, is that he is excessively serious. Dater's Handbook is almost insulting to men who enjoy culture, painting them as bores who are incapable of having a good time or a sense of humor. George is pleasant and polite, but rather stiff and formal. He smiles politely at Cass' jokes and goes along with her likes such as miniature golf but isn't into it.

Any man who wears both a tie and a sweater to miniature golf is not going to be a wild and crazy guy. To the film's credit he is not unpleasant when rebuffing Cass' attempt to pick at his plate, calming telling her that he brought enough dessert for everyone. However, this is a sign for Cass that he isn't for her, despite his pleasant-but-serious demeanor.

Her true love would not mind this quirk. 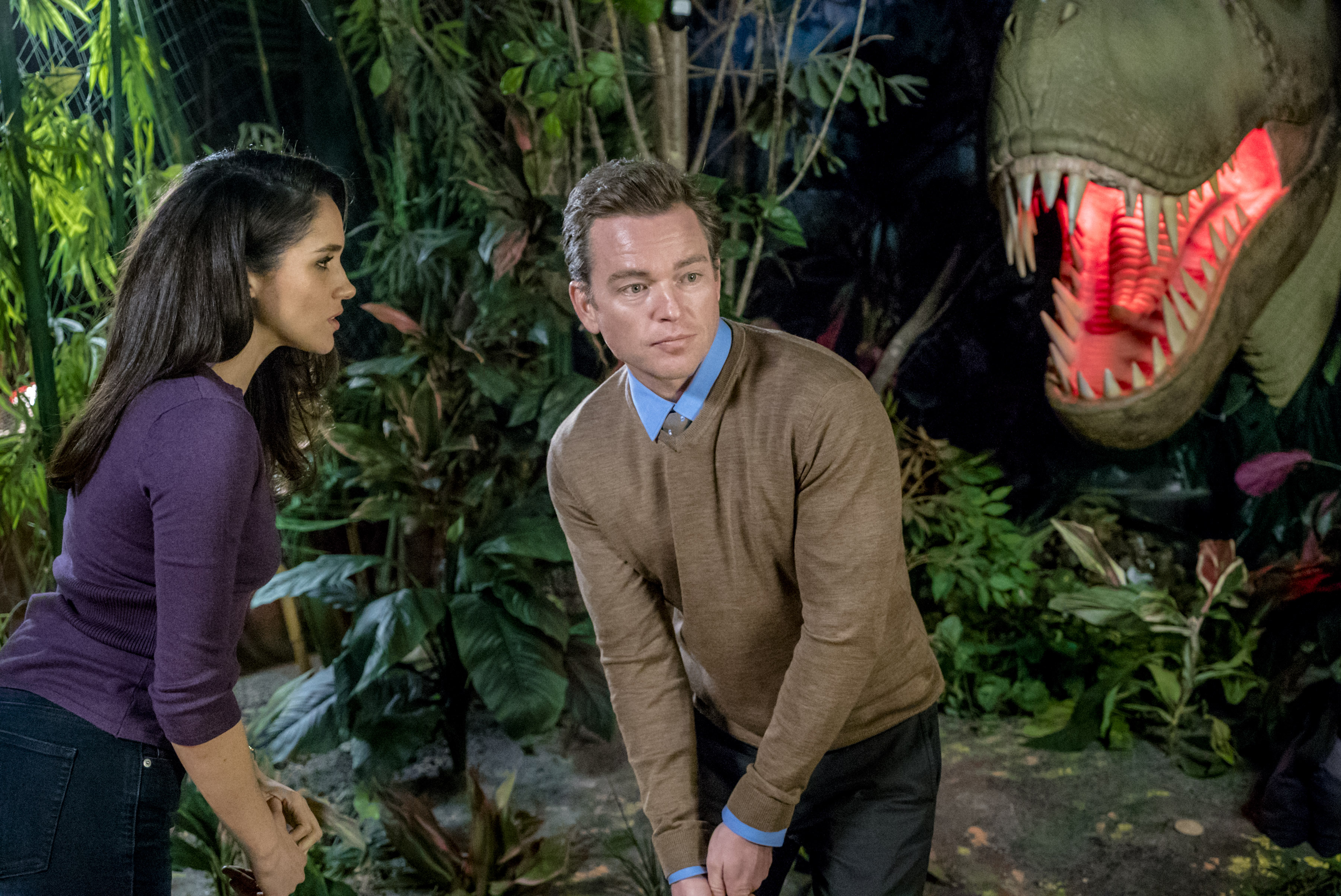 Dater's Handbook also has some flat-out bizarre moments and leaps of logic that indicate the project was not well-organized. In one scene, George and Robert meet when both show up unannounced on her birthday to give her gifts (George with flowers, Robert with the iPod). They even shared a few words, though granted George left right before Robert brought out his gift. However, when discussing this Cass claims that they 'passed each other in the hallway' and didn't meet.

Why would Cass make up such nonsense since Nadia and Gloria knew Cass was seeing both men simultaneously?

As a side note, it's curious that Dater's Handbook has no issue with the thought that Cass is essentially deceiving both men and two-timing them, putting them up against each other in some oddball competition neither knows he is participating in.

Cass and Nadia also apparently have been keeping Nadia's husband Michael (Adam Greydon Reid) in the dark, for he almost spills the beans to George about him 'winning out' as the suitor, a comment George clearly does not understand. This is impossible as Michael is fully aware of Cass' predicament, but why would he inform one of the unwitting contestants of something he should have known about?

Dater's Handbook makes clear Cass is going to end up with Robert right from the get-go by presenting George as so formal and devoid of humor. The film spends so much time building Robert up as this fun-loving nice guy that for all of George's qualities (his wealth, intelligence and culture), he never stood a chance. It was as if he was basically created to try and introduce an element of conflict when there was no chance he was one.

I am surprised no one ever came up with the term "Markle Sparkle" when talking about Markle. Dater's Handbook show her to be a competent actress, making good with the material that does not ask much from the performers. Give her credit: Markle put all her efforts to sell Cass' dilemma even though it isn't much of a dilemma to any right-thinking woman. She has some good dramatic moments, such as when breaking off with loutish Peter. Markle also has a good flair for comedy where if she had continued her career she might have made for a good screwball comedienne.

There is a scene where Cass accidentally eats wings with honey, which she is allergic too. Her panic and pratfalls lead up to Dater's Handbook's funniest moment, where through a series of bizarre circumstances it looks like poor Robert has actually stabbed Cass in the diner. I admit laughing at this moment.

There is also a funny moment when Nadia, Gloria and Michael see Cass' initial choice. Nadia squeals "George!", Gloria lets out a sad "George." and Michael has a matter-of-fact "George."

Polaha is equally competent as Robert, bringing a nice casual manner to the character. He has a breezy style that sells the character's goofy charms. Scarfe too played George well, pleasant but formal, not a bad man and even a good catch for the more sober-minded woman.

I did think Reid was a bit camp as Michael to where I wondered about the Michael/Nadia marriage. Brittany Wilson as Cass' assistant Dana and Drew Ray Tanner as Phil, their dimwitted employee, also had moments of comedy. Chatelain and Boyd were fine as the sister and mother, and Rothery's "Dr. Susie" (a spoof of Dr. Laura and Dr. Phil) seemed more eager to rattle her lines off and get off the screen as quickly as she could.

Dater's Handbook is not particularly good or clever. There are a couple of funny moments and is good for mild distracting entertainment. If it weren't for Markle it would be all but unwatchable. It isn't well-developed but harmless, earning its spot in history as the farewell performance by a woman who, contrary to what Lorde sang about, did indeed become Royal.