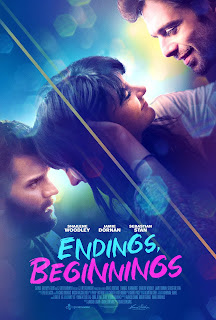 Modern romance is so perplexing, so puzzling. There's love, lust, sex and emotional entanglements, sometimes all at once. Endings, Beginnings looks at one woman at the top of a love triangle in one tumultuous year. While a bit too artsy for my tastes, Endings, Beginnings has a central performance from one of our finest actresses that makes it worth a viewer's time.

As 2018 rolls into 2019, artist Daphne (Shailene Woodley) is at major crossroads. She's just ended her longtime relationship with her boyfriend Adrian, has left her job unexpectedly (the reasons emerging through the course of the film) and is living in her sister Billie's (Lindsay Sloan) pool-house (which may be causing more strain in Billie's marriage). Daphne manages to find limited employment at her friend Ingrid's (Kyra Sedgwick) art shop and struggles in the relationship with her mother (Wendie Malick).

At Billie's New Year's Party, Daphne meets two wildly different men. There's Frank (Sebastian Stan), a very casual and cool customer. Then there's Jack (Jamie Dornan), a softer, more intellectual figure. She is drawn to both and both are drawn to her: Frank being the "suffer buddy" and Jack the sensible, sensitive shoulder. Daphne struggles between them, the struggle harder when she learns they are friends. As far as I can make out, she starts a romance with Jack and an affair with Frank: with the former there is sex and love, with the latter sex and excitement. 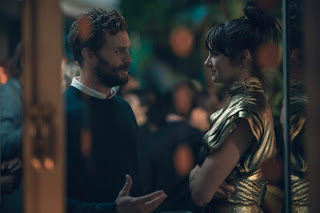 Reality eventually hits Daphne when she finds herself pregnant. She does not know who the father is, having had sex with each of them on consecutive nights. After some thought and words of wisdom from Ingrid about how she will have someone to love her despite Jack and Frank, she opts to keep her baby.

Jack is distraught at the news of her tryst, and Frank eventually reappears with a new girl and dubious about the responsibilities of fatherhood. However, Daphne will carry on as she has grown as an adult: finding peace with her mother, support from her also-pregnant sister and the hope that she can be the mother she knows she can be.

Under normal circumstances, one would be aghast at the idea that Daphne would have sex with two different men on back-to-back nights, her bouncing about raising eyebrows. It is to director/co-writer Drake Doremus (writing with Jardine Libaire) that this does not come across as tawdry but as a mix of desire and confusion. In a certain way, Daphne's choice is as old as time itself: the struggle between the free-spirited man (Frank) and the sensible, sensitive one (Jack).

I suppose it complicates matters when a woman has to choose between Christian Grey and the Winter Soldier, but I digress. 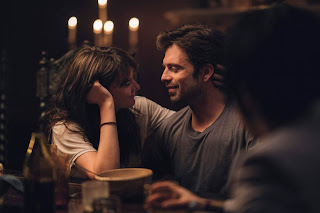 Endings, Beginnings paints a very sympathetic portrait of Daphne, who genuinely cannot decide between someone who offers her passion & excitement and someone who offers her stability & devotion. Granted, from the looks of it they both offered great sex and maybe I'm being flippant here but good sex can make even bad relationships hard to break.

What really elevates Endings, Beginnings is the central performance of Shailene Woodley as Daphne. Apart from the unfortunate Divergent franchise that floundered and withered few filmmakers have been able to capitalize on Woodley's extraordinary talent. Doremus has, focusing on her extremely expressive face. It is extraordinary how Woodley can convey so much with just a quick facial change, the myriad of emotions her character goes through with just an expression or forced smile. Woodley makes Daphne a full-formed figure: one who cares for her niece, makes awful mistakes, learns to accept and forgive others and herself, and most importantly grows up.

I've never thought much of Dornan or Stan as actors and Endings, Beginnings does not shift my view much in that department. Dornan's limitations are that he would struggle with an American accent and is remarkably expressionless. He's very handsome, true, but Dornan is not a particularly good actor. Endings, Beginnings probably is his best work because it uses his weaknesses (Irish accent, almost monotone manner) as strengths to play Jack. Stan's too-cool-for-school Frank was not a hard role to play but to his credit he too did a serviceable job.

It was the women who fared best. Along with Woodley you had small but strong performances by Maleck and Sedgwick as the mother and mentor respectively. It's a wonder why Maleck is not given more dramatic parts to play and why Sedwick just isn't a bigger star than her talent would inspire.

Endings, Beginnings has some issues for me. There were too many shots of people in profile and a lot of times when people would sit quietly while their dialogue was running. Other times we would get flashbacks that took a while to piece together. I put this down to the artsy nature of the film which again doesn't go over well with me personally. I also thought the sex scenes went a bit further than I would have thought necessary. However, with an interesting story and an exceptional central performance from Shailene Woodley, on the whole I found Endings, Beginnings worth seeing.