The Kingmaker: A Review 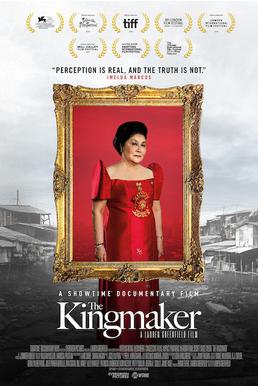 "Perception is real, and the truth is not," observes former Philippines First Lady Imelda Marcos in The Kingmaker, a documentary about her life and career. While that statement is true, it probably is not in the way Madame Marcos thinks. In turns hilarious and horrifying, The Kingmaker is a combination The Tigress in Winter and Lady Macbeth's Revenge.

Director Lauren Greenfield has unfettered access to Mrs. Marcos, who at then-85 is still a striking-looking though heavyset woman with her jet-black perfectly coiffed hair, elegant gowns and sensible though surprisingly not extravagant shoes. She talks freely about her life and as she remembers things; in her world all she really wanted to do was be a mother to her nation. Freely handing out cash to anyone who asks, her benevolence extends to giving her family to the Filipino people. Her only son, Ferdinand "Bongbong" Marcos, Jr. has the goal of being Vice President (in the Philippines, President and Vice President are elected separately), and her daughters, nephews and grandchildren are also government officials.

Mrs. Marcos benevolence included being a de facto roving ambassador for peace, able to charm such figures as Chairman Mao (whom she claims not only kissed her hand but credited her personally with starting to end the Cold War). She also found such figures as Gaddafi and Saddam Hussein quite generous and kind, perplexed as to how anyone would think them bad figures.

As she continues with her reminiscences, such as how just before fleeing she had to put "diamonds in diapers" (really her grandchild's diaper bag), we also see her working to help Bongbong return the Philippines to the Golden Age...that age being the Marcos' extended rule, one sadly being remembered by the next generation with the same rose-tinted lenses the Marcoses use. However, The Kingmaker also interviews the various victims of the Marcos regime, who would disagree with Madame's assertion that "beauty is the extravagance of love".

Victims tells their own memories, which differ sharply from Mrs. Marcos. There's another political dynasty: the family of Benigno "Ninoy" Aquino, the Marcos political rival killed when he returned. There are various Filipinos who were tortured during the Martial Law period. The most curious are the residents of Calauit Island, who had first been expelled by the Marcos regime to create an animal sanctuary and who returned when the regime fell. They now endure the surviving giraffes and zebras, who serve as an informal emblem of the Marcos Era: inbred, unhealthy and making wrack and ruin for the community.

While Bongbong fell short of winning the Vice Presidential race, the election of President Rodrigo Dutarte bodes well for the ambitious unofficial Filipino monarchy. Duterte got help from the Marcoses, and coincidentally President Dutarte allowed Ferdinand Marcos' burial in the Heroes Cemetery, a longtime wish for the family.

Will the now-90 year old Madame return to Malacanang Palace? Only time and her indomitable yet shady will can tell.

It is a curious thing that while many documentaries and history books focus on the male dictators, few look at the women behind them. The Kingmaker makes a powerful case that behind her extravagance and 3,000 pairs of shoes Madame Marcos is a formidable, shrewd political creature, selfish and self-centered, interested less in being "Mother of the Nation" and more "Mother of a Dynasty". Her only real equivalent would be another famous or infamous First Lady: Argentina's Eva Peron, who like Imelda gained power outside her husband, President/Dictator Juan. The Imelda Marcos in The Kingmaker has outdone Evita in terms of power, and corruption, and greed, ambition and evil.

At least Evita had no children.

The Kingmaker reminds me of General Idi Amin Dada: A Self-Portrait in its cinema verite portrait of a megalomaniac who come across as both buffoonish and malevolent. We see a woman who is comical in her sometimes bizarre actions. One particularly oddball moment is when we go to her pool, where large photographs of various world leaders she's worked with are set up. Picking up one from Russia, she inadvertently causes the others behind it to tumble and crash. Despite the fallen pictures and audible glass-shattering, Madame Marcos continues on, undisturbed to perhaps unaware of what exactly she's done. Greenfield shows the poor servant having to clean up the mess his mistress made, another unintentionally symbolic moment. 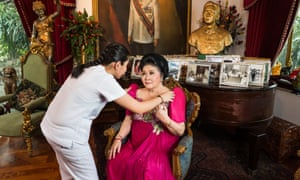 Late in the film, there's a Freudian slip when she gives an informal press conference about her family's political ambitions. "I was only eight years old when I became orphan," she starts, "and when you lose your money...your mother, you lose everything". Who among us hasn't confused "money" with "mother"?

It is clear that Mrs. Marcos at best remembers things the way she wants to remember them versus remembering the way it actually was. "Before, during my time, there were no beggars," Mrs. Marcos states with a straight face (or at least what I think is a straight face, the camera focused on the beggars than on her). "I had a place for them," she immediately follows, the sinister suggestions of such a statement lost on Madame.

Over and over, The Kingmaker portrays a woman who was and is clearly a powerful force, from her devotion to the Lenin-like mummified corpse of "Marcos" (she always refers to her husband by his surname) to her disappointment that at 50, her son Bongbong is still not President when "Marcos" was at 47. Greenfield, however, does not merely make Imelda Marcos the figure of ridicule she already has become thanks to her almost boorish tastes. Instead, we see her slowly evolve from a figure of fun to a dark figure, a Lady Macbeth with a more lavish wardrobe.

Other interviews counter Imelda's own memories. Sometimes some are surprisingly tawdry, such as a secret recording of President Marcos' tryst with one of his many mistresses, an American model with the curious name of Dovie Beams. Hearing the President sharing intimate moments with his mistress and coo "I will kiss you" while they giggle raises eyebrows, though the statement from a government official's widow that Imelda used the tape as blackmail to further her own ravenous greed would not.

The various victims counteract her tales of a benevolent ruling family; this is one of the most gripping and heartbreaking segments in The Kingmaker, as interviewee after interviewee recounts his or her survival from physical torture and sexual molestation, a counterweight against the grandiose nature of the Marcos family. Even the lone and underfunded gamekeeper states clearly that contrary to Imelda's claims she never visited Calauit Island after her return from exile.

The Kingmaker stuns you with the sights of adoring Marcos supporters, the lavish celebrations of the Marcos dynastic plans and on how Imelda Marcos in particular is either manipulative and crafty or delusional if not downright bonkers.

Weird, amusing and alarming, The Kingmaker shows that when it comes to Imelda Marcos, the shoes of a potential dictatoress definitely fit.