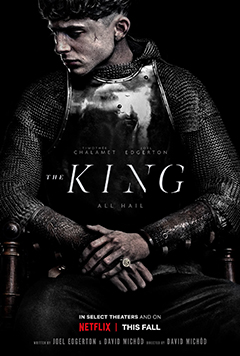 I'm always up for a good Shakespeare adaptation. Unfortunately, The King, a loose adaptation of Henry IV Parts 1 & 2 and Henry V, is not a good adaptation. It thinks it is, but after watching The King, I could not find one thing I genuinely liked about it.

Young Prince Hal (Timothee Chalamet) is in the words of one of his many opponents, "a whoring fool". He also is, unfortunately, the Prince of Wales and heir to the English crown, held tenuously by his father King Henry IV (Ben Mendelsohn). Henry IV and the future Henry V would rather have the crown pass to Prince Thomas (Dean-Charles Chapman) but that was not to be.

With Hal now King Henry V, his youth and inexperience make him prey for enemies internal and external. His only genuine friend is Sir John Falstaff (co-writer Joel Edgerton), a wise counselor and adviser to our unmerry monarch. His major external enemy is France, on whom he makes war after King Charles VI sends an assassin.

Henry V faces off against the Dauphin (Robert Pattinson) at the Battle of Agincourt, where he makes the Dauphin look a fool. Also, Henry V wins. In exchange for peace Charles offers his daughter in marriage, but thanks to her Henry realizes there is another Court Fool: himself, and he makes quick work of the charlatans who got him into a needless war. 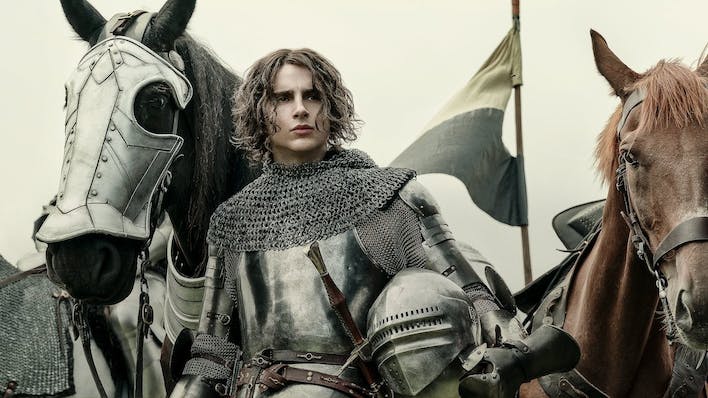 The film may be titled The King, but for all intents and purposes it might as well have been titled Falstaff: The Untold Story given the prominent and surprisingly ennobling role our rotund knight had. I freely confess that I do not know the history plays as well as I should or could. However, as weak as my knowledge of the Henriad is, I do not remember Falstaff being the source of wisdom or of deep thoughts on war. In fact, what shifts the character from the wastrel Hal to the noble Henry is his very rejection of Falstaff and the past he represents, turning away from his former carousing buddy to accept his destiny as monarch.

This is the second Joel Edgerton script that I have seen after Boy Erased, where he also played a major character (Edgerton cowriting The King with director David Michot). Both times he has failed to win me over, but The King is even worse in that it takes a particularly great source material and butchers it. The King is a slog to sit through: boring, endless, lifeless, with no action, no motivation, a terrible sense of self-importance where everyone is "acting" versus "being".

It is a poor sign when your allegedly main character's greatest character development is signaled by a haircut: emo-like threads for Hal, short hair for Henry.

Worse, The King has some of the most ghastly performances of the year. There is not an ounce of life in any of the characters, almost everyone speaking in this faux-important whisper that almost suggests they weren't sure of their lines and tried to compensate by speaking them softly.

Chalamet is wildly miscast as Hal/Henry. He does not display either a wild and reckless life of debauchery or his evolution to the noble and powerful monarch he became. Instead, Chalamet seems like a little boy thrust into some kind of oddball epic trying to figure it out along the way. Chalamet is more willowy than imposing, and it beggars belief that this scrawny kid shifts into the muscular monarch (muscular in every meaning of the word).

Part of his failure is not Chalamet's fault; he was poorly directed by Michod, who made everyone "act" so serious. In fact, all the seriousness in The King drowns out any chance for drama or emotion. Part of his failure lies with co-writer Edgerton, who gave himself the plum role of Falstaff, now as Action Hero versus Drunken Buffoon. He too whispers, but in one of those "whispering = deep thoughts" acting styles that plagues many a faux-epic. Thomasin McKenzie as Henry's sister and Chapman as Prince Thomas are wasted in essentially cameos who might as well have been cut out altogether. 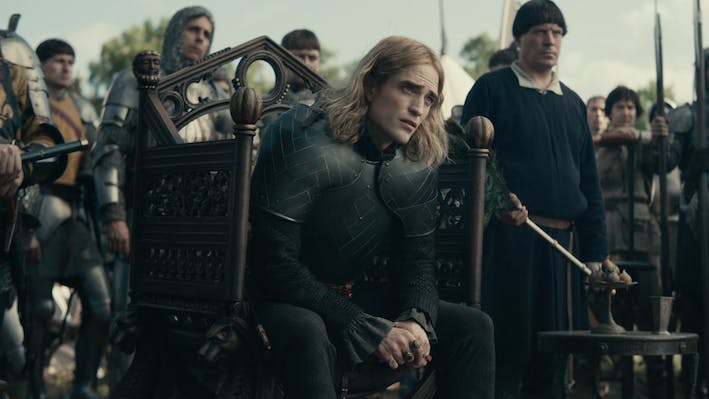 Faring worse, however, is Robert Pattinson as the Dauphin of France. Looking like Dracula's grandson and sporting a French accent that Monty Python would reject as too over-the-top, his Edward Cullen-Meets-Inspector Clouseau shtick confirms for me that Pattinson cannot act. I keep getting told he's his generation's Peter O'Toole, some titanic force of cinematic brilliance that transcends sparkling vampires. However, even he cannot claim pride in The King for his inevitable Honorary Oscar or Kennedy Center Honors tribute.

The King also is saddled with nearly indecipherable cinematography where you feel like calling for a flashlight to see what is going on and a score that thinks better of itself than it should be. It is absolutely astonishing that the Battle of Agincourt, which should be the climax of the film, looks almost boring.

As I think back on The King, I genuinely wonder why any of them decided that their version of the Henriad would be something people would want to watch over other versions. It has no action. It has no romance. It has no humor. It has no drama. It has no emotion. It has no character development. Apart from bad performances and a dull narrative, it has nothing.

May The King never reign.