Beasts of the Southern Wild: A Review

BEASTS OF THE SOUTHERN WILD

Beasts of the Southern Wild has been praised, perhaps too much.  While the film offers some beautiful imagery, some wonderful music, and at its heart a story about fathers and daughters and the difference between growing up and becoming an adult, Beasts of the Southern Wild is not this life-altering picture it is being pushed at.  Instead, BSW is a small film that gives us a look at a unique, bizarre world that can no longer hide.

Our story is told by Hushpuppy (Quevenhané Harris), a little girl who lives a carefree life in The Bathtub, an enclosed island off New Orleans where life is filled with independent folk, celebrations at the drop of the hat, but one filled with a bit of fatalism.  They wait for the waters to rise and wipe The Bathtub out of existence, but in the meantime they'll keep on living.

Hushpuppy lives with her father, Wink (Dwight Henry), although 'live with' is a loose term.  They live near each other, and Wink calls Hushpuppy over for dinner, but she has a house of her own.  In her own naive way of looking at the world, she can't quite figure out the trouble with Wink.  The hospital gown and bracelet don't alert her that he's quite ill, but his collapse after she burns down her house does alert Miss Bathsheba (Gina Montana), The Bathtub's version of a schoolteacher.  Hushpuppy tries to give Wink Miss Bathsheba's medicine, but there's a storm a'brewin'.

Most residents of The Bathtub decide to flee, but a few, including Wink, Hushpuppy, Peter T. (Henry Coleman), Little Jo (Pamela Harper) and Walrus (Lowell Landis), the last two owners of the local jukejoint, are going to ride out the storm.  This storm does away with most of The Bathtub, and in the mystical way the Bathtubbers see the world, balance will only be restored when the levees that keep N'Awlins safe get blasted and allow the waters to flow again.  Miss Bathsheba knows this is foolishness, because it will only attract government officials that will take them away from The Bathtub and into shelters.

Nevertheless, they blow up the levees, and as Miss Bathsheba feared, the feds come in.  They take them all 'for their own good', but Wink won't settle into this foreign world.  He knows he's dying, yet he will not receive treatment.  He wants to die in The Bathtub, and Hushpuppy has to come to terms with Wink not living anymore, even if she doesn't want it to be such. 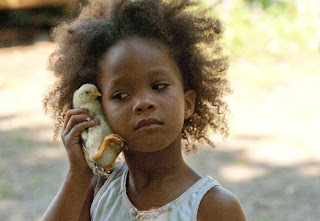 Beasts of the Southern Wild has a mystical bent to it, in particular to how Hushpuppy sees the world.  She has both an innocence and a wisdom to her, someone who believes strongly that everything has a heartbeat and that all things are connected.  She might be a small person, but she is as vital to the universe as anything else.  Hushpuppy has a certainty that she is a piece of the world and as such she has to fit into the great scheme of things.

It is that combination of innocence and wisdom that makes Harris such a delight in BSW.  Her worldview is that of a child, but also of someone who sees herself as important because she IS, because she exists.  Henry, as her father Wink, is someone who is not the most loving of fathers on the surface (he yells at her a lot and doesn't shrink from shoving her when he feels she pesters him) but in his own way also tries to teach her how to survive in a world where he knows he won't be there for her.

If anything, I'd say Beasts of the Southern Wild is a semi-mystical film, one not meant to be taken literally.  This came to me while watching the scene where Hushpuppy and some of her friends swim to a ship that takes them to an off-coast ship called Elysian Fields, which appears a combination crab shack/whorehouse.  It all looks rather surreal, dreamlike, with the suggestion that Hushpuppy's mother (who left The Bathtub long ago and whom Hushpuppy 'talks' to) may be there.  Just the name not only evokes a sense of mystical and mythical paradise but also another Southern tale: A Streetcar Named Desire.

I can't say that Lucy Alibar (adapting her own stage play Juicy and Delicious with director Behn Zeitlin) had that in mind, but their screenplay has those moments where Hushpuppy's innocence is certainly wise.

One thing in Beasts of the Southern Wild has in its favor is the score, which was written by Dan Romer and Zeitlin, and Ben Richardson's beautiful cinematography which captures the beauty, ugliness, and fantasy of The Bathtub.

I liked Beasts of the Southern Wild, but don't consider it a groundbreaking film.  Instead, it is a visual feast, a work of great imagination but one that I wasn't crazy for or one that was as powerful as it is being built up to be.