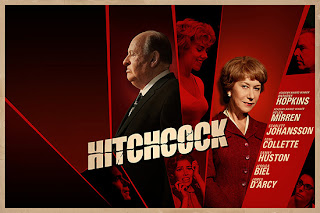 A Portrait of The Artist As An Old Man...

As an unabashed Alfred Hitchcock lover, I approach Hitchcock, a film about the making of Psycho, with a mixture of interest and trepidation.  Would it ridicule the Master of Suspense?  Would it take great liberties with one of the greatest films ever made?  Well, Hitchcock really is not about the actual making of Psycho than it is a domestic drama/comedy where we see the genius and his wife go through various difficulties to find that the do actually love each other.

Alfred Hitchcock (Anthony Hopkins) and his wife Alma Reville (Helen Mirren) have just enjoyed a lavish success with their lavish production of North By Northwest (he directed, she helped and guided him behind the scenes).  Now the brilliant director is looking for his next project.  A close friend of Alma's, Whitfield "Whit" Cook (Danny Huston) has a project he'd like the director to look at.  Hitch however, isn't too keen on it.  As he searches for his latest film, he starts sensing he needs something new, something different, something that will be unlike anything he's done before.

Into his life comes the novel Psycho, based on the true story of Ed Gein (Michael Wilcott) one of the most infamous serial killers in history.  A story that has graphic beheadings, incest, and transvestism?  Hitchcock thinks it's perfect, while everyone else thinks he's crazy.  Alma isn't too thrilled either, especially after having to self-finance the project via a mortgage, but she dives in (metaphorically and literally given her passion for her pool) with aplomb.

The cast is then gathered: the leading lady in Janet Leigh (Scarlett Johansson), the male lead in Anthony Hopkins (James D'Arcy) and in a smaller role, Vera Miles (Jessica Biel), who was once Hitch's protege but now can hardly be tolerated by her mentor.  The production of Psycho has problems both from the censors (who object to many things, in particular a toilet being shown AND flushed) and from the studio (which is concerned the movie will be seen as being in bad taste).  Still, Hitch carries on, even while he suspects his wife is now having an affair with the glamorous Whit (Hitchcock's own fixations with his leading ladies notwithstanding).

Finally, once the film is put together, Hitchcock still can't bring it to life.  Something is missing.  That something is Alma.  She had once been excited about having a project all her own apart from her husband, but now she grows disillusioned with Whit's playboy attitude and behavior.  Finding that they work best as a team, they put Psycho together and have one of the greatest films made and Hitchcock's greatest success ever. 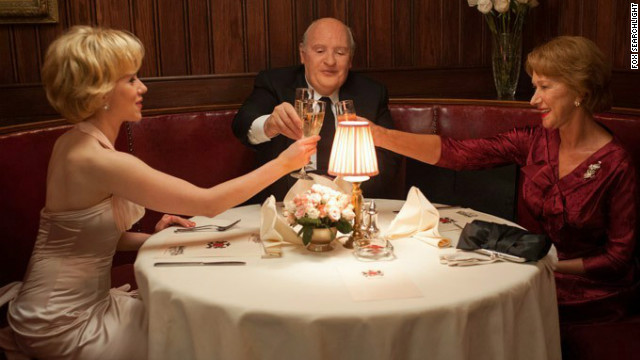 Despite its protests to the contrary Hitchcock barely touches on the actual making of Psycho.  While it's interesting to see Ralph Macchio (yes, THE Ralph Macchio) on screen as the screenwriter Joseph Stefano, there is something to be said about Hitchcock's intentions in that the credited screenwriter has only one scene in the whole film.  In fact, we don't get in Sasha Gervasi's film much about Psycho itself.

For example, D'Arcy has very little screentime as Anthony Perkins (although his mannerisms and voice make him eerily look and sound like the actual Perkins), and there are some subtle jabs at his closeted homosexuality.  When Perkins is thanking Mr. Hitchcock for the chance to be in the film, the director replies, "Call me Hitch, hold the 'cock'".  Read what you will in that.  However, by the time we got to the filming of the actual shower scene, D'Arcy seemed to have been all but forgotten.

Less so is Johansson as Janet Leigh.  Johansson is an actress who has grown from being mere 'eye-candy' to someone who gives better and better performances in her films.  the closest parallel I can find is Marilyn Monroe: who similarly started out as just a pretty (dumb) blonde but grew to be able to hold her own against classically trained actors.  Monroe's personal demons demolished her, but fortunately for us, Johansson doesn't appear to have Monroe's hang-ups.  Her Leigh is a strong woman, someone who takes her job of acting seriously, and one who warms to Hitch but never allows the director's notorious fixations with his leading ladies to affect her personally or professionally.

Even Biel, a woman who basically has struggled to be considered an actual actress, does her best work as Vera Miles.  Her part is small but she makes the most of it as someone who knows the pitfalls of being a 'Hitchcock Blonde'.

Hitchcock is clearly a showcase for Hopkins and Mirren as the famous couple.  Hopkins never quite managed to sound like Hitchcock.  The latter's distinctive voice and droll delivery never quite got there.  Basically, Anthony Hopkins sounded like Anthony Hopkins trying to sound like Alfred Hitchcock: Hopkins' own distinct voice always working its way onto the screen.  This isn't a slam on Hopkins, because in terms of character he makes Hitchcock into both a driven man and one who delights in gallows humor.  At the press conference announcing his new project, Hopkins/Hitchcock clearly delights in telling the press to try the finger food.  "They're made with real fingers," he tells them as they look over the pictures of the Gein case.

Mirren doesn't break new ground as Alma Reville.  She specializes now in intelligent women who might be tempted but always goes with the man she loves.  Mirren's Reville is a capable woman who is slightly frustrated at being in the Master's shadow but who knows that she is integral to his success (and who knows her husband knows it too).

Basically,  while John H. McLaughlin's adaptation of Stephen Rebello's Alfred Hitchcock and the Making of "Psycho" may have touched on the actual 'making-of', there isn't much if anything learned about the actual 'making' of Psycho.  Instead, Hitchcock is almost a comedy about a couple going through suspicions and irritations but knowing that they need and complement and love each other very much.

I considered Hitchcock to be a light affair, inoffensive save for the odd connection of Hitchcock with Gein (at one point Gein serves as Hitch's fantasy psychiatrist) and between Hitchcock and Norman Bates (Hitch too has a peep hole to which to watch Vera Miles undress).  On the whole while you don't learn much about how Psycho came to be in Hitchcock, you get a nice image of this little English couple who despite all the difficulties of the world, manage to find a symbiotic relationship that works wonders.