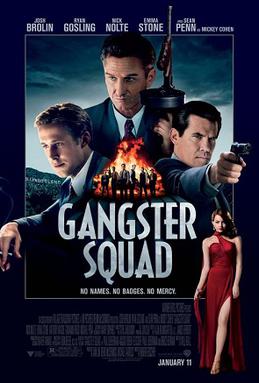 Gangster Squad is the first film for me in the year of our Lord 2013.  I understand that it hasn't received the best ratings from some of my brethren, and I can see why.  January is usually a graveyard for films that have to be released but which don't have much enthusiasm from their respective studios.  Gangster Squad is by no means perfect; in some ways, it's derivative of better films with some curious decisions by some of its cast in terms of what they do on-screen.  Having said that, Gangster Squad is disposable entertainment that can be appreciated more for its style than for its substance.

Los Angeles, 1949.  The Second World War may be over, but for some of its veterans, the battle has just begun. The city is being taken over by mobster Mickey Cohen (Sean Penn).  L.A. Police Chief Parker (Nick Nolte) and his right-hand man Darryl Gates (Josh Pence) have decided to form a new unit to deal squarely with Cohen, one that won't be too strict about its interpretation of the law.

To head up this operation they select Sargeant John O'Hara (Josh Brolin), who is reckless, strict, and has already run afoul of Cohen (though Cohen odoesn't know who burned down his brothel).  The war veteran now makes this is quasi-divine mission, and while his pregnant wife Connie (Mireille Enos) doesn't really want him to do this, she later helps form his squad.  Among those she selects is Officer Coleman Harris (Anthony Mackie), who is motivated by cleaning up his ghetto, Officer Max Kennard (Robert Patrick), an old-school Wild West-type marksman, and Officer Conway Keeler (Giovanni Ribisi), who is a technical whiz.  Kennard has a junior apprentice, Navidad Ramirez (Michael Peña), whom he calls "Christmas" (since that's what Navidad is in Spanish), who kind of pushes his way into membership.

Only one person won't join: Sgt. Jerry Wooters (avant-garde actor Ryan Gosling).  He doesn't see much in redeeming the City of Angels, but does see something good in schtupping Cohen's mistress, Grace (Emma Stone).  However, after Cohen's men kill a shoeshine boy he's fond of, Wooters is in.

Gangster Squad then goes into how said squad bit by bit take down Cohen's operation, while Cohen tries to find out who is behind his sudden troubles.  While only Keeler expresses any qualms about the methods of how Cohen is being pursued, this doesn't seem to trouble anyone else.  However, one of their number is killed (one guess as to who) and the entire thing ends in a final bloody shootout at Cohen's hotel, where justice is finally served.

Gangster Squad had simply the misfortune to have a scene that would come back to haunt it, one that had to be removed before its original release date in September 2012.  In what would have been the climax of the film, there was to be a wild shootout inside Grauman's Chinese Theater with moviegoers caught in the crossfire.  In one of those awful twists of history, the trailer for Gangster Squad featuring a clip of this ran in the midnight screenings of The Dark Knight Rises, where in Aurora, Colorado less than an hour later people were murdered inside a movie theater.

This of course required the filmmakers to remove the scene altogether (although I wonder if it will appear as a special feature in the DVD release...certainly they can't be blamed for Aurora because this was filmed long before and they couldn't have known what was to occur) and restructure the film.  A sequence in Chinatown took the place for Grauman's Chinese, but on the whole it does prove a lesson that one doesn't need excessive violence to tell its story.  For my part I didn't miss the Chinese Theater sequence and felt the story went along fine without it.

That being said, I thought Gangster Squad was a bit like The Untouchables, Junior.  Although adapted from Paul Liberman's Gangster Squad, screenwriter Will Beall seemed to take more from the Brian DePalma film.  The gangster wants the lawmen dead...their families, dead...and so on.  One of the squad himself is taken down to where I half-expected a sign to read "Touchable".  Fortunately we didn't have an Odessa Steps rip-off (I mean, homage) from Battleship Potempkin, but if we had, then we'd have a situation where Gangster Squad would have been laughed off the screen.

In terms of performances, I wonder why director Ruben Fleischer allowed the most 'actory' of his actors to do as they did.  First, Penn decided to go all-out in his villain, wildly overacting his wickedness.  The make-up job did not help: he looked as if he'd wandered out of Warren Beatty's Dick Tracy, the Jewish cousin to Big Boy Caprice.  It veered close to if not actually slipping into parody.

Avant-garde actor Ryan Gosling similarly opted to have a little fun playing gangland cop.  He opted for a thin, reedy voice rather than his normal speaking voice, which seemed so at odd with the goings-on.  Here again, it almost veers towards the comical, especially whenever he expresses anger avant-garde actor Gosling slips into his natural speaking voice.

As for everyone else, it seems that Mackie and Peña are what was once called 'tokens', minorities that appear in the film to show how diverse the movie is but play a small role in the proceedings to where you wonder why they are there in the first place.   Patrick does look like he came off a Western film, and had good moments of comedy (as when his plan to break out O'Hara and Harris out of Burbank Prison flops) but again little to do.

Only Brolin has much a backstory to him (and most involve that pregnant wife of his).  His constant connection to the War and crime is never fully followed through.

Finally, on to the 'tomato', Emma Stone.  She was appropriately beautiful but again, given little to do other than strut her stuff.

In terms of violence, it does at times go overboard with how it relishes showing the intensity of it (which curiously, real film noir didn't, just to point out).  It would have been better if some of it had been toned down (the ripping apart of people, the cutting off of hands could have been removed) but one should accept that this neo-gangster film was trying to show what they thought violence of the era should be.   Though the final shootout was more video-game than noir, I wasn't totally horrified by it.

On the whole,  while Gangster Squad has some great visuals and certainly has a nice retro look, the lack of character development (coupled with Penn's overenthusiasm for the role and avant-garde actor Gosling's sotto voce delivery) take some of the joy out of it.  Gangster Squad is not terrible, but the fact that it could have been better puts a damper on it.