The Wackiest Lawyers In the Navy...

Here with Summer Girls we find that our heroes Jared Franklin (Breckin Meyer) and Peter Bash (Mark-Paul Gosselaar) regressing.  They once were free-wheeling but clever, and that was what we loved about them.  The cases may have been offbeat and their courtroom behavior bizarre, but at least they knew what they were doing and achieved positive results.

In Summer Girls, they are just idiots, and not just idiots but almost criminally irresponsible ones with their clients.  They are not only clearly over their heads with dealing with the military, but they know it and just don't care.  Convinced of their own brilliance and how their charm and antics will go over as well in the military tribunal as it does in civilian court, Summer Girls does nothing but embarrass our leads.  If not for the subplot involving Damien Karp (Reed Diamond), Summer Girls would have been the worst episode of Franklin & Bash, which given its track record this season it can hardly well-afford.

Franklin and Bash are throwing a bash for the summer interns, which displeases Karp but which he can't do anything about given his uncle and law firm head Stanton Infeld (Malcolm McDowell) endorsed.  One of the interns catches Karp's eye, but he is more nervous than aroused.  However, it's at this time that Jared and Peter are called to take on a case.

Petty Officers Monica Ward (Kayla Ewell) and Nicole Toomin (Gabrielle Dennis) have been charged with assault after a bar brawl.  They run the risk of getting thrown out of E.O.D. (Explosive Ornaments Disposal), the closest thing women can come to being a Navy SEAL (G.I. Jane be damned).  Their reputation precedes them, and off Franklin and Bash go to Malibu.

At base, it's clear these guys are not prepared, let alone take any of this seriously.  They certainly don't think JAG Steven Puckett (Josh Randall) is up to their level.  JAG Puckett obviously made a very simple-minded mistake by getting evidence against the Petty Officers without a warrant.  Franklin and Bash, these brilliant attorneys, are therefore shocked, SHOCKED, to discover the military plays under different rules and that they DON'T need a warrant.

After some investigations, where they bring in Hanna (Garcelle Beauvais), who had actually served as a JAG and has experience in military matters to basically bail them out, we find that they were set up.

In the subplots, Damien Karp both recognizes and is recognized by that intern, Alyssa Farrell (Tifanny Dupont).  She was a dancer at a club that Karp was compelled to go to by former clients who worked her way through college.  She remembers him because Karp was the only man to behave at the club, even keeping the other guys in line.  He's obviously attracted to her and vice-versa, but he tries to keep things professional.  However, being a man who has either been denied or denied himself sex, he gives in to temptation.  Alyssa likes him and is bright, but a mistake on her part gets her fired.  So determined is Karp to see her reputation not ruined that he goes over her report and finds she was right after all. 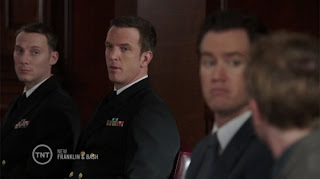 It's a curious thing that the actual subplot of Summer Girls proves more interesting than the case itself, in particular because the leads really don't solve the case or even help.  In the tradition of all slackers (which Jared and Peter would freely cop to being), it was Hanna who did the heavy lifting in putting the pieces together.  Furthermore, we see that Karp's journey from the stiff attorney to a man moved by his struggle between his ethics and desires proves more interesting and realistic than Franklin and Bash's shallow world.

In terms of performances and storylines, Karp appears to be a real person.  Yes, he is the antagonist to Jared and Peter, and he is rather formal and snobbish towards most people.  However, he at least thinks about things.  He genuinely struggles between being a proper gentleman and being a man with all the passions that come from it.  When Karp finds that even his ethics can give way to his libido, we see that he struggles with the ramifications and even becomes slightly more human because of it.

That can't be said for Peter and Jared.  From the moment they arrive at Malibu...no, from the moment they MEET their clients, they appear to be barely literate, let alone brilliant attorneys.  At one point, the petty officers giggle among themselves and say that these two have no idea what they are talking about when it comes to the EOD.  Being civilians, there is nothing wrong with not knowing that.  Why they felt compelled to pretend to know is a mystery.

Why they showed they were not taking anything seriously when their antics and behavior would show them to be frightfully inept.  I have a very limited knowledge of the law, let alone military law, but even I knew that the military wouldn't need a warrant.  How these two lawyers were not aware of that makes them shockingly inept and not worthy of any valued reputation for brilliance.  Sensible people would have checked up on these little things, and/or gone on to first accept Hanna's advise, not blow it off.

The joke about Franklin and Bash being cocky but brilliant is now wearing thin given that these two are slowly slipping into being more stupid than brilliant.

Perhaps my biggest beef with Aeden Babish's screenplay is that the resolution is rather cliched and dependent on things turning their way.  What exactly made anyone sure that the instigator would have a last-minute conversion and confess?  They were taking a strong risk that their clients would end up in prison, lose their chance to pursue their dreams of EOD and have a dishonorable discharge after serving their time.  Again, it was something out of their control that saved them, and they rolled the dice without knowing the odds.  It was fortune, not cleverness, that got them the victory, which never ceases to play like a cheat.

As for a sub-subplot involving Pindar and a valuable knife, Kumail Kinjiani got the comedy right in his regression to panphobia.  Of course, one wonders exactly why he would use the term 10 Stone to describe his weight (perhaps his nerves converted it from pounds, which he could have used by now).  Still, when the secondary stories prove more interesting than the main one, the series is in danger of slipping to DEFCON 5.

Next Episode: Last Dance
Posted by Rick at 6:16 AM