Doctor Who Story 051: Spearhead From Space 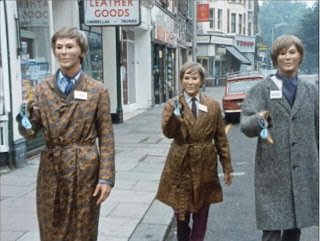 Spearhead From Space has several firsts to its credit.

Curiously enough, the Autons would be the first monsters featured in the revived Doctor Who  in the story Rose. Yet I digress.

Spearhead From Space is also a simply brilliant story apart from all those firsts and an excellent debut story for Pertwee, ushering in a Golden Age for Doctor Who yet to be equalled (sorry, Matt).  In its four-episode story, we quickly establish that this Doctor will be less comic and more adventurous, ironic in that before Who Pertwee was best known as a comic and as I read once, "eccentric cabaret performer".   Instead, by playing everything straight, Pertwee became instrumental in one of the best Third Doctor stories and perhaps the best debut story of all.

Strange meteorites have crashed upon Earth.  What makes them curious is that they appear to be coming down in formation.  A couple of them became separated from the main group.  One of them has been taken by a military-type organization we'll get back to in a minute, the other has been found by local poacher Sam Seeley (Neil Wilson), whom manages to slip it past the military.

At the same time, a man emerges from a police call box clearly debilitated.  He's taken to a local hospital where the patient keeps coming in and out of consciousness.  There is also something peculiar about him: he has a binary coronary system (ie. two hearts) and the blood is like none on Earth.  The news of the police box attracts the attention of Brigadier Lethbridge-Stewart (Nicholas Courtney), who senses that it is his old friend, The Doctor.  The Brigadier is still with UNIT: United Nations Intelligence Taskforce, charged with investigating the mysterious.  The newest unwilling member of UNIT, university scientist/professor Liz Shaw (Caroline John) is singularly unimpressed.  She dismisses the entire idea of aliens from other worlds coming.

However, coming they are.  At a plastics factory, Mr. Ransome (Derek Smee) confronts the owner, George Hibbert (John Woodnutt), upset about his contract being suddenly cancelled.  Hibbert appears to be taking these orders from Mr. Channing (Hugh Burden).  Ransome suspects something is off and goes to investigate.

Channing is also concerned, not just about the missing meteorite, but about that new patient UNIT is taking an interest in.  A failed kidnapping attempt almost gets the patient killed, but soon everyone (including the patient) recognizes the Doctor for who he is: The Doctor.   The plot thickens.

The Doctor's TARDIS has been disabled by the Time Lords, and he grudgingly accepts that he has been exiled on Earth.  Soon, we learn that the meteorite is really part of a whole, containing a being of sorts which is at home in plastics.  Channing's plot now becomes clear: he will make plastic facsimiles of government and military officials to colonize the Earth for the Nestene Consciousness.  To aid them, the plastic 'dummies' soon become alive, terrorizing the country as they begin their invasion. 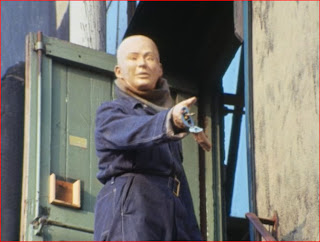 They are the AUTONS!

The Doctor, with Liz at his side, is able to create a device that will defeat the Autons and the Nestene Consciousness, with the Brigadier bringing the muscle.  With them defeated (including Channing, who turns out to be an Auton himself), the Doctor agrees to become UNIT's 'scientific advisor' in exchange for shelter (given his TARDIS is disabled).  However, one little bit of bureaucracy remains: what name to use?  The Doctor says his name is Smith.  John Smith.

Spearhead From Space came from Robert Holmes, who would go on to write some of the greatest Doctor Who stories.  In fact, one of his later works was voted by Doctor Who Magazine readers as the Greatest Doctor Who Story of All Time (Take THAT, Moffat!).  Holmes could not have come up with a better debut story.  The Autons in their own debut story prove to be a terrifying monster.

Holmes' script allows for moments of humor to sneak in through, but they at least have a context within them that makes the humor logical.  For example, in Episode Two the Doctor is trying to escape the hospital and get back to the TARDIS, but he knows he won't get far wearing his hospital gown.  He then comes across a room marked, "Doctors Only".  Inside there is a shower and some clothes.  As the Doctor rummages through them he hears people coming.  Next thing you know, while the two men are in the room, the Doctor is taking a shower to not draw attention to himself.  Once they leave, the Doctor exits the shower and selects his own wardrobe.

As a digression, in The Eleventh Hour, when the Eleventh Doctor had a similar scene sans shower, his wardrobe choices with Companions Amy and Rory "Pond" was played up for laughs.  In Spearhead From Space, it might have been amusing, but it made sense.  In other words, it wasn't comic for comedy's sake.

Even though Spearhead From Space is only four episodes long there is an epic feel to it.  In the first episode alone you have so much thrown at you: the spheres coming, the Doctor collapsing, Liz appearing, the attempted kidnapping and near-killing of the Doctor, that it is amazing that so much occurred so rapidly in a mere half-hour.  The other hour and a half is filled with equally brilliant and truly frightening moments.

Episode Three has the killing of Ransome by an Auton, and it is quite shocking.  the sound effect of the Auton's weapon going off, along with the smoke that rises and the evaporation of Ransome, is violent and frightening and most importantly, well-filmed.  That, however, is just a prelude.  In Episode Four when the Autons 'awaken' and begin their assault on the citizens, the pacing and performances make it all more frightening with an economy of scale.

If one looks at the Auton invasion carefully, you'll see that we only 'hear' them breaking the glass from the shop windows they've been in.  We also see very few people on the streets when they unleash their attack.  However, the camera work and the actual assaults on bystanders goes so fast that it becomes quite terrifying.  The Auton invasion is one of the best moments in Doctor Who because it only gives you hints of what horror it must have been.

Director Derek Martinus also got great performances from his regular cast and guest stars.  Burden's Channing is a chilling one, where the antagonist is cold, methodical.  When he tells Hibbert that there will be 'total destruction' for those who stand in his way, it shows him to be fierce adversary.  Woodnutt's Hibbert is appropriately whimpering, and Snee's Ransome is in turns intelligent and frightened: when he faces the Auton his last moments are well, scary.

Even though this is their first story together Courtney and Pertwee play so well together as the Brigadier and the Doctor that they form a great double-act.  Pertwee in particular goes from confused to fully in charge without missing a beat.  His performance in Spearhead From Space indicates that his Doctor is one with authority who will also always manage to find a way out of the danger he faces.

In particular is in Episode Three when he tricks Liz into getting the TARDIS key back.  He tried to escape but found that the Time Lords had indeed made it impossible to leave until further notice.  He goes from defiant to apologetic, almost repentant, for trying to pull a fast one and failing.

Only John's Elizabeth "Liz" Shaw seemed a little hesitant, a bit too unbelieving.  I fault more the insecurity of where her character would stand in relationship to the Brigadier and Doctor than anything else.  However, John made Shaw a bright woman, one who could aid the Doctor in his scientific endeavours.

Spearhead From Space is a thrilling, past-paced story with great performances (and lest I forget, Dudley Simpson's score) and the beginning of a great run for Jon Pertwee as The Doctor.  It feels like a film rather than a television story, elevating it above others with wobbly sets and off costumes.  The look of Spearhead From Space just enhances a well-written, well-acted, and well-directed story, one of the best of both Pertwee's tenure as well as the series as a whole. 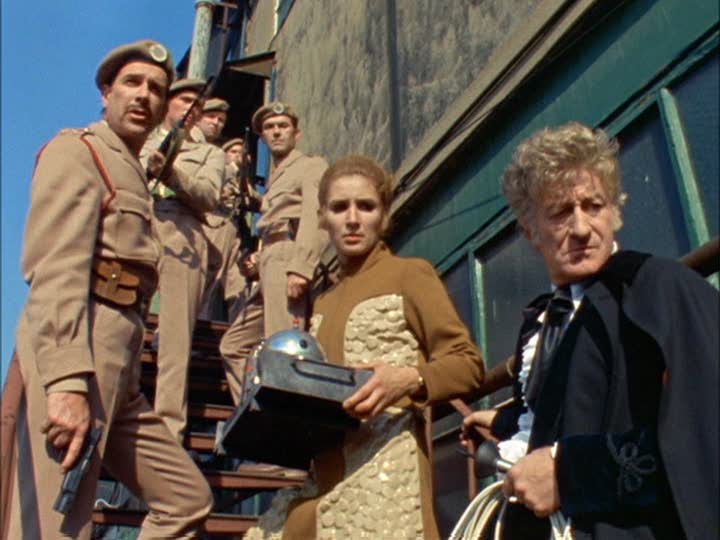 Next Story: Doctor Who & The Silurians