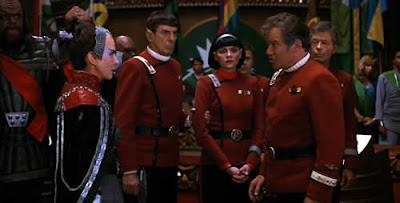 Some Things Should Remain Undiscovered...

Though I am by no means a Trekkie/Trekker, I have always insisted that Hamlet is not a play the Klingons would care for, let alone quote. I can't imagine a Klingon asking him/herself, "To be or not to be, that is the Question".  If anything, they would always "be". Why this warrior breed would enjoy or embrace the story of a man who almost WON'T fight but spends his time vacillating between taking action and not is a puzzle.  The Klingons I think would be more into something like Macbeth; with all the killings and coups, the Scottish play would be more up the Klingon's street. Therefore, Star Trek VI: The Undiscovered Country, already starts out on an off note.  While I applaud The Undiscovered Country for continuing in the effort to be an allegory about the world, the story itself gets sidetracked tremendously.  It starts off well, but then devolves to a general mystery/adventure story that got lost from its original intention.

Captain Zulu (George Takei), formerly of the U.S.S. Enterprise but now at the helm of the Excelsior, finds himself feeling the effects of a massive explosion on the Klingon moon Praxis.  The explosion is so powerful it blows Praxis apart, sending literal shockwaves in space.  Now the Klingon Empire has at the most 50 Earth years before the poison from Praxis will kill them all.  The Klingon economy will not be able to take this literal blow, and now the United Federation of Planets has a choice: start the peace negotiations the Klingons have asked for or strike to defeat them.  Despite the objections of Admiral Cartwright (Brock Peters), the Federation, under overtures opened by Mr. Spock (Leonard Nimoy) decides to negotiate and bring peace to the galaxy.

Using the old Vulcan proverb that "Only Nixon could go to China", Spock suggests sending Captain James T. Kirk (William Shatner) and the Enterprise crew to escort the Klingon Chancellor Gorkon (David Warner) to a peace summit on Earth.  Accompanying the Chancellor are his daughter Azetbur (Rosana DeSoto) and his chief of staff, General Chang (Christopher Plummer).  Kirk, still bitter about the death of his son at the hands of Klingons in The Search for Spock, does not want to go, but he does as he's told.

Also along on this voyage is Spock's protege, Valeris (Kim Cattrall), a fellow Vulcan on her first voyage.

Well, soon things really spin out of control.  From out of nowhere the Enterprise appears to fire two missiles at the Klingon Bird of Prey.  Two mysterious figures transport onto the Chancellor's vessel and kill him.  Chang (who somehow survive unscathed) now accuses Kirk and McCoy of murdering the Chancellor.  Azetbur, now appointed Chancellor, will continue the peace process but at a different location to be kept secret and on one condition: no rescue attempt for Kirk and McCoy as they stand trial. 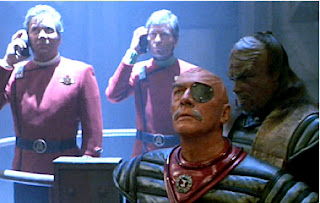 We now see Klingon Justice.  Chang acts as prosecutor, while the Federation Captain and Doctor are defended (weakly) by General Worf (Michael Dorn).

Side note: I have never gotten a straight answer from Trekker/Trekkies if this Worf is the SAME Worf from Star Trek: The Next Generation, but given the time frame I figure it is an ancestor with the same name...played by the same actor.

In any case, Kirk and McCoy are found guilty, but rather than be executed they are sentenced to life imprisonment on the asteroid Rura Penthe, aka the Alien's Graveyard.  Here, they meet Martia (Iman), a beautiful prisoner who we learn is a shape-shifter. She helps them escape, but then we learn she too is part of the conspiracy against them.

While all this is going on, Spock and Valeris begin their own investigation as to how missiles could be fired from Enterprise when all weapons are accounted for.  There's evil at work, and after many false turns (and Kirk and McCoy's rescue) we find the assassins, along with the traitor within their midst.  We also learn that the Klingons have a new weapon: a Bird of Prey that can fire while still cloaked (invisible to the Federation radar).

If you don't know who is behind this conspiracy, then basically you are an idiot. With the help from the Excelsior, the Enterprise and her crew are able to defeat the traitors and save the conference.

We now bid a fond farewell to the Enterprise crew, with the suggestion that the torch is about to be passed...

Watching The Undiscovered Country, I never shook off the sense that Denny Martin Flinn and director Nicholas Meyer's screenplay (from a story by Mark Rosenthal, Lawrence Konner, and Nimoy) simply got away from them.  You have basically three stories going on in Undiscovered Country: the peace conference, the murder mystery, and the escape from Rura Penthe.  Each one really could be a whole film onto itself, but they are all slammed together to where the balancing act soon becomes impossible to hold.

What would have benefited Undiscovered Country tremendously is if they hadn't gotten so carried away with the action on Rura Penthe and returned to a focus on who and why the peace conference should not take place.  One could have imagined that forces opposed to peace between Klingon and Federation would join together on screen to thwart the peace process, even perhaps tempting Kirk to join this cabal.

Instead, we get bogged down by daring escapes and a mystery aboard the Enterprise that appears rather silly.  An important piece of evidence is uncovered but in a way that shows that the ship really WASN'T searched stem to stern.  The traitor proves to be obvious but I'd argue illogical in that said traitor really had no reason to participate in this conspiracy.  In fact, I'd argue that it was EMOTION rather than LOGIC that motivated the crime, which is again, illogical.

The script to its credit did make the parallel to the ending of the Cold War (by the way, WE won...sorry Vlad Putin and your bitch Medvedev).  We start with this Chernobyl-like disaster, and cover the fears and resentments on both sides.  At times the parallel is overt (Chang tells Kirk at the disastrous dinner that, "In space, all warriors are Cold Warriors"), but up to the time of the murder things were going well.  Once we get to Court TV: Klingon Edition, and then slip further out with Escape From Asteroid of the Klingon with occasional visits to Murder, Spock Wrote, that things start going in meandering routes to the conclusion, which plays like The Klingon Candidate.

Now, that isn't to say that Undiscovered Country doesn't have some good things in it.  The screenplay has certain wit to it.  At one point, Kirk's notorious predilection for bedding beautiful aliens is spoofed with Martia.  At a climatic fight between them, when Martia shape-shifts to Kirk, the Original Kirk says, "Can't believe I kissed you".  The faux-Kirk retorts, "Must have been your lifelong ambition".   Even the most fierce Shatner-lover must have laughed at that.

"Logic is the beginning of wisdom, Valeris, not the end," Spock informs his protege.  It is interesting to see Spock turn to accept that what makes Vulcans unique, their reliance on reason over emotion, cannot be the be all end all.  Spock and Kirk slowly accept that all things do end, even their journeys in space, and these moments are welcome.

I always champion Shakespeare, and Plummer makes the most of his villainous Chang.  However, I do wonder how quoting Prospero's monologue from The Tempest ("Now our revels have ended") makes him particularly menacing.  It was clear that he would be the villain, so I wonder whether the mystery was all that important to the film.  I think Plummer relished going all-bad given Chang has no subtlety about him and how he was almost wild with fury at their trial (again, wouldn't he have been a witness rather than prosecutor...little things like that get to me).

In a rare turn, Cattrall, who normally plays bimbos and/or whores, goes against type to play a logical Vulcan.  It seems almost shocking that Samantha the Slut could be called upon to play an alien, one with no emotion at that.  I'll say that Cattrall did as good a job as she was able to do.  While she is no one's idea of a great actress (I struggle seeing her as Desdemona), Cattrall did her best to be another sterile (emotionally speaking) being.  I still argue that her rationale is a bit murky and that even SHE doesn't quite take things as seriously as the members of her 'species' would, but at least she and Spock didn't get it on.

I shall put the issue of Cattrall's performance thus: Iman was more animated on screen, but Cattrall was playing an emotionless being, so it all balanced out.

As a side note, I did wonder whether Takei's loathing for Shatner was so great that he had to be elevated to Captain and thus avoid having to be under him.  This of course is something I cannot verify, but I did note that Hikaru Zulu never appeared with his castmates.  If one thinks about it, Zulu was a secondary, almost unnecessary character in The Undiscovered Country.  Really any Starfleet Captain could have been there to serve as Enterprise's reinforcements.

Star Trek VI: The Undiscovered Country has much to recommend it: a timely story which is filled with a mix of nostalgia and sadness of having to take a final bow.  My only displeasure comes from how it started wandering away from its Cold War relevance to be more about escapes and mysteries than about intergalactic machinations to stop peace from coming.  This is why, with regret, I give it a mild reprimand.

Next Star Trek Film: Star Trek Generations
Posted by Rick at 6:02 AM