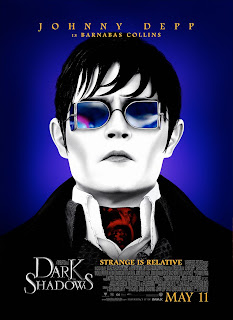 Well, it shouldn't surprise anyone that I never saw Dark Shadows, the 1960-70s Gothic soap opera populated by vampires, witches, and other supernatural beings.  Among other reasons I missed this show: I would have to have been around when the show first aired, I would have preferred Count Von Count over Barnabas Collins, and I doubt in my formative years my parents would have thought Dark Shadows would be appropriate fare.  My time would be better spent watching children's programs like Hunter, Knight Rider, The A-Team, Airwolfe, Street Hawk, and The Equalizer.  Be that as it may, I have enough knowledge of Dark Shadows to go into the film adaptation of the television series without being completely lost.  I say 'completely' because judging from the film version, I now don't know if the television Dark Shadows was meant to be stupid or just ended up that way. Dark Shadows, the film, never decided whether it was an homage, a spoof, or a faithful recreation of the series.  Whatever it was intended, Dark Shadows ends up being a mess.

We start in 1760, when the Collins family emigrates from Liverpool to Maine.  There, Barnabas Collins (Johnny Depp) has fallen in love with Josette DuPres (Bella Heathcoate).  However, maidservant Angelique Bouchard (Eva Green) has either fallen in love with Barnabas or had an affair with him (I wasn't sure which) but in any case he would not he loved her.  Angie, being a witch, puts a curse on the Collins family, leading to a hypnotized Josette throwing herself off a cliff and Barnabas not only being turned into a vampire but buried semi-alive.

We now go 1972.  Using the alias Victoria Winters (Heathcoate again) becomes the new Collins family governess to David (Gully McGrath), who claims to talk to his dead mother.  No one in the family believes him: not David's father Roger (Jonny Lee Miller), not his aunt and Collins Family Matriarch Elizabeth Collins Stoddard (Michelle Pfeiffer), not Elizabeth's daughter Carolyn (Chloe Grace Moretz), or even the family psychiatrist Dr. Hoffman (Helena Bonham Carter), who has taken permanent residence and is a lush.  Soon, however, things take a turn, as Barnabas' coffin is unearthed and he kills the work-crew unfortunate enough to have found him.

Barnabas goes to the family estate, hypnotizes the groundskeeper, Willie Loomis (Jackie Earle Haley...how I fight to refer to him as Groundskeeper Willie), and with only Elizabeth knowing the truth, joins the Collinses as Barnabas Collins III, distant British relation.  He now sets about to restore the family fishing fortune, brought nearly to ruin by...Angelique, who still lives and has a monopoly over the fishing industry in Collinsport.

That's pretty much it in the story department.

Barnabas has difficulty understanding the mod world of the 1970s, is enchanted with Victoria (who bears an uncanny resemblance to Josette), takes turns fighting and screwing Angie Baby (given it's the 70s, I can be forgiven a little Helen Reddy reference), continues to be puzzled by such things as lava lamps and Alice Cooper (who has an appearance playing himself), and ends in a climatic battle where basically most of the Collins household save Roger and Dr. Hoffman fight THE WITCH! THE WITCH! As I kept watching Dark Shadows, I didn't think it was horrendous.  I thought it could never agree on what the story actually would be, let alone on whether Tim Burton and screenwriter Seth Grahame-Smith had ever come to a conclusion as to what tone Dark Shadows would take.  Grahame-Smith has gained fame for his mash-ups of horror and literature/history with such work as Pride and Prejudice and Zombies (pretty self-explanatory) and his adaptation of his own Abraham Lincoln: Vampire Hunter.  I confess to having enjoyed AL:VH as good, mindless fun, which puts me in the minority of film reviewers.  Say what you will about AL:VH, at least it kept a consistent tone (serious despite its oddball nature).

What Dark Shadows never was, was actually good.  The biggest problem with Dark Shadows is with what is suppose to be the chief draw: Johnny Depp himself.  I can't say that Depp gave a bad performance; he gave the performance that was asked of him: the eternally stiff gentleman (no pun intended).  It's in the fact that Depp kept that one tone throughout Dark Shadows that is the problem.

In the beginning, Barnabas' confusion over the advances in the two centuries might be amusing.  However, by the end of the film, it makes him look like a blithering idiot.  Here he is, fighting to the death this witch, and he's STILL this stiff, formal gentleman.  One would have imagined that Depp, Burton, or Grahame-Smith would have allowed Barnabas to have grown in some way, taken note of the serious danger his family was under, but no--that would spoil the 'fun' of seeing this proper sixteenth century man still not get what's going on.

Take for example this idea that women find Barnabas irresistible.  He reacts to women performing sex acts on him puzzling, as if he'd never had sex before.  You really can't have it both ways: you can't make Barnabas some sort of sex object and make him completely unaware of the pleasures of the flesh at the same time.

It isn't as if Dark Shadows didn't give hints or make some efforts to make Barnabas a more rounded individual.  A subplot about him being a father-figure of sorts to David is hinted at, but we never get a follow through.  Again, the screenplay keeps giving suggestions of where the story will go but keeps getting lost along the way.   Victoria's story is basically forgotten (as is her character) to where one wonders WHY the 'modern' section of Dark Shadows starts with her.  Miller's character of Roger was not even necessary to the story: the choice Barnabas gives him (either be a good father or I'll pay you off and never see your son again) is both expected and really boring...as well as showing how irrelevant Roger was to the story to where you wonder why he was there to begin with.

Then you get elements in Dark Shadows that just come out of nowhere.  Since WHEN was Carolyn a werewolf?  This either comes out of nowhere or I just fell asleep during the film and I just didn't see it.  It is lazy writing to have this twist without giving the audience any clue that it would happen.

Moreover, whenever the film tries to go for full-on comedy it just falls so painfully flat.  At a climatic moment in Dark Shadows, Barnabas is literally on fire, yet he doesn't appear to notice.  While the moment apparently is played for laughs, Danny Elfman's music makes it sound as if it were a dramatic moment.  It just never makes any sense.

What sealed the deal for me of Dark Shadows being a hideous misfire is when Angie Baby literally vomits AT Barnabas as a form of attack.  He dodges the first launch and even says, "Missed me", before you know what will happen next.  It's an ugly moment in more ways than one.

Dark Shadows is simply a lost opportunity.  It could have been a clever homage to this cult series.  It could have been a comic riff on the bizarre storylines the series was known for.  Instead, it was all over the place, throwing in elements left and right that never added anything to whatever story it was trying to tell or wanting to tell or thinking it was telling.

Dark Shadows is ultimately neither homage nor spoof of the series.  It ends up being a basterdization of it, almost as if the people behind the movie really wanted to destroy its reputation rather than celebrate it.  It's more mocking than anything else, and these Shadows deserve more respect than its 'fans' gave it.