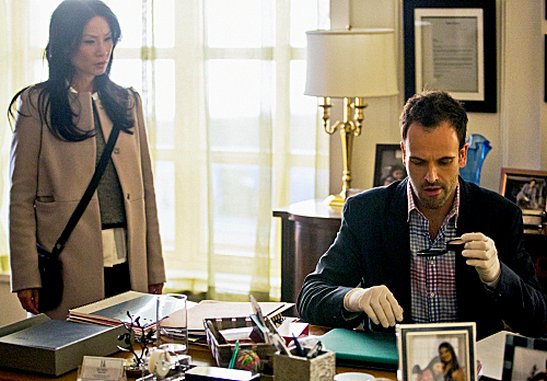 Sherlock Spies To Me...

Dirty Laundry has moments of wit, moments of serious, and moments that build character, and given the actual plot of the Elementary episode, that compensates for the rather offbeat story.  Offbeat might be a nice way of describing Dirty Laundry.  In retrospect, while I thought the acting and the mystery itself unfolded well, one wonders whether this was a throwback to Cold War fears come a good thirty to forty years too late.

Recovering addict Sherlock Holmes (Jonny Lee Miller) and Sober Companion Dr. Joan Watson (Lucy Liu) are coming to the end of their time together (or at least the six weeks Watson has been assigned to Holmes).  Holmes may insist he's doing all right but it looks like he will actually miss his partner in crime (and vice-versa).  However, no time for reflection, as we have a strange murder to solve.  Terri Purcell, hotel manager, is found dead inside a hotel washing machine.  There is a broken pen at the scene but no ink.  In fact, the body and clothing is rather clean (no pun intended).

From all indications, Terri was a very nice person with no enemies, so as to why she was murdered we slowly start finding out.  Is it her husband Oliver (Mark Moses), recently unemployed with signs of domestic discourse?  What about the 'gentleman caller' Geoffrey Silver (Jake Weber) that the nosy neighbor saw?  Nothing so far on both counts.

Next, we turn to the ladies of the evening who frequent the hotel lobby and barroom.  They had been thrown out at one time so perhaps either a 'strumpet' (Holmes' word) or their pimps had it in for Terri.  No, say our working girls, far from it.  In fact, Terri provided protection and access to their 'clients'.  She even kept dismantling the security cameras to provide them cover...all free of charge.

Now things keep getting curiouser and curiouser.  Why would Terri help out the call girls without so much as taking a cut (finder's fee, anyone)?  Terri did install hidden cameras in the hotel rooms, but she didn't blackmail the men, so what was going on?  Holmes quickly puts it together: Terri and were deep-cover Russian spies, using the hidden cameras with diplomatic guests to secure information for Vlad Putin and his bitch Dmitry Medvedev (as you might have guessed, I'm not a fan of either).

The death of Terri is a result of the conflict between Terri and Oliver.  Vlad the "non-dictator" had ordered them to have a child, and they did: Carly (Melissa Farman), who had all the rights and privileges of American citizenship.  The Purcells weren't fond of each other, but they did love the daughter.  Terri wanted Carly (who was completely unaware of her parents' activities) to follow in the family business, while Oliver did not.  Things came to a head when Carly told her mother that she had been accepted with full scholarship to Michigan.  Rather than be thrilled, Terri was furious.  She insisted her daughter go to Georgetown and revealed the reasons why.  Horrified, Carly pushed her mother, causing Terri to hit her head.

Carly believed she had killed her mother, but unbeknown to her, Geoffrey (who had come in to sort this all out), who was the Purcell's handler, found that Terri was not dead.  Therefore, he finished the job and planned to railroad Carly towards following in her mother's footsteps.  However, Holmes and Watson were there to save her and Oliver (who turned state's evidence in exchange for protection) from imprisonment.

Oh, and the pen with no ink?  Well, it did have ink...it was just invisible, and the reason it was broken was because Terri tried to stop Geoffrey with the only thing she had on her.

Invisible ink?  Russian spies? Liz Friedman and Christopher Silber's screenplay had elements that seem almost amusing on the surface (or at least inadvertent advertising for the upcoming The Americans FX television series which is about...deep-cover KGB agents in 1980s American suburbia).  Somehow, I would have found it more believable if they'd opted for either Chinese spies (those Commies still are after us) or fair-skinned jihadists who could blend into American society (wasn't Danny Thomas Lebanese?  Should we then start investigating That Girl for divided loyalties?)  Perhaps the idea of Russian spies today seems rather far-fetched, but in Dirty Laundry, I'll give it a pass merely because most everything else made it intentionally funny or great moments of drama.

One thing to recommend Dirty Laundry is that Liu's Joan Watson takes center stage both in regards to the mystery and to her relationship with Holmes.  She has started growing in her own deductive powers.  Not even Holmes figured that Carly, like him, had dealt with a drug issue.  She also is the one that pointed out the fact that every suburbia had a nosy neighbor AND that said nosy neighbor had to have seen a lot given she was pruning outside season.

Liu as Watson also has great moments with Miller's Holmes.  Their conversation at the hotel lobby while they go 'whore-fishing' is a delightful exchange (especially with Holmes' rather unique terminology: how often do you describe hookers as 'strumpets') and she even is allowed moments of comedy.  Poor Watson seems genuinely stunned that the hooker they've been questioning would take sexual interest in HER, not Sherlock.

Given how Sherlock has been portrayed in Elementary, one can only imagine what thoughts must have raced through his mind at the thought of two women...

Finally, it is in the gentle moments (either with Carly or Holmes) that Liu does her best work.  Watson is allowed to be caring, tender, even accepting of Holmes' inability to admit he genuinely likes having her around.

Miller likewise continues to grow as Sherlock Holmes.  He's still the smartest man around, and in Dirty Laundry I was pleased that how he worked out that Oliver was unemployed was presented to us logically without excess fuss.  Elementary STILL has these blue/green-tinted flashbacks that are maddening to me but perhaps I should just resign myself to it.  His ways with words (in particular the hotel lobby scene) are both witty and amusing, but when he does suggest through his face and voice that he does in a way need 'my dear Watson', Miller also does some strong work.

As for the guest stars, I was much impressed by Farman, whose character had some difficult circumstances to overcome.  She did an excellent job of someone who had overcome problems but who found herself in terrible circumstances.

Lest I forget, both Aidan Quinn's Captain Gregson and Jon Michael Hill's Detective Bell continue to show their relevance to Holmes and Watson's endeavours.  With Quinn, I've enjoyed the fact that he isn't made to look like an idiot but as someone who is merely able to reach a point in the investigation and then gets stumped.  Hill is now appearing to grow in accepting that Holmes isn't a nuisance but someone who can assist them when the need arises.

If it weren't for the fact that the spies were RUSSIAN (which seems a slight too retro) Dirty Laundry might  have ranked a bit higher.  However, with strong interplay between Liu and Miller and a methodology that allowed us to at least keep up with them (minus the Russian angle), it is a good episode in what is turning out to be a smashing premiere season.